Russian Pancakes are big and very thin, resembling French crepes. The best thing about them is a huge variety of fillings and toppings. I made both sweet (strawberry jam) and savory (sour cream, caviar, smoked salmon) versions! 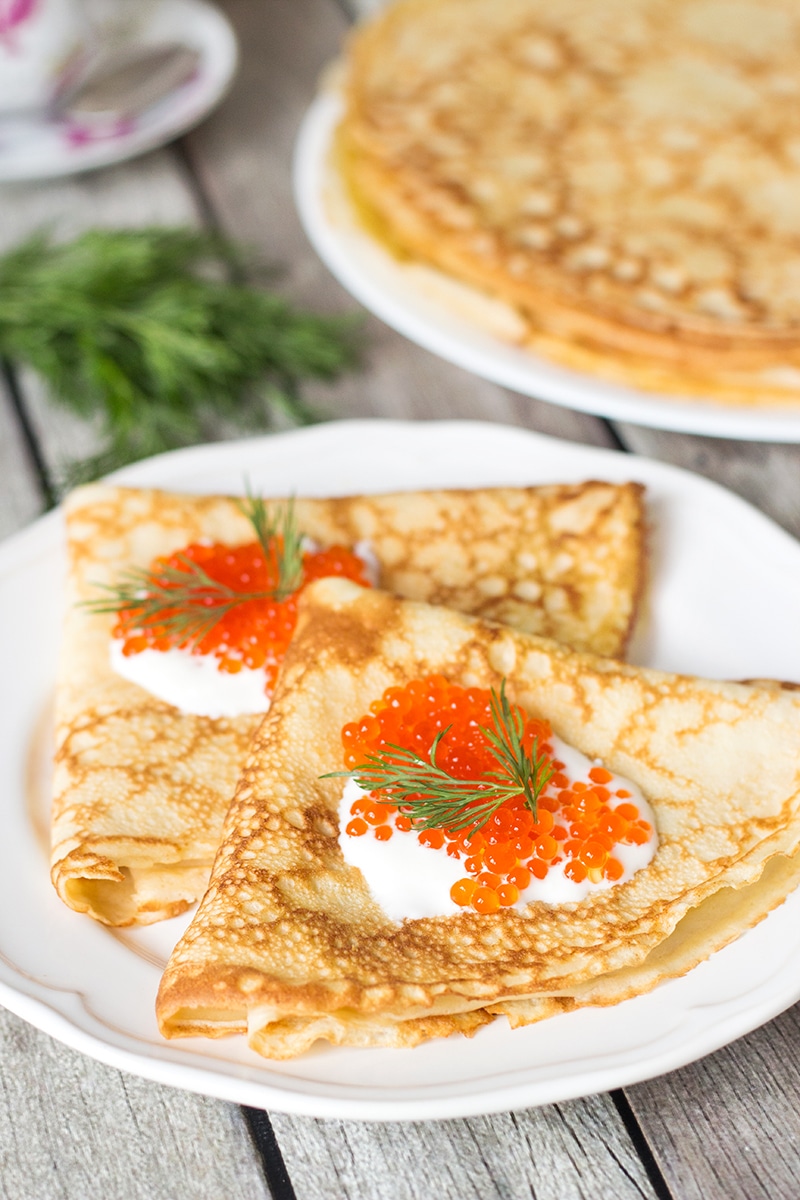 I decided to dedicate one more post to the food of my childhood. The food that takes me back in time on a trip down memory lane. It’s amazing how a certain smell or taste can send signals to the brain and trigger some memories buried deep in our minds! One of such foods for me is Russian Pancakes, called Blini. I don’t know how many times I have enjoyed them. Hundreds? No, thousands would be a more accurate answer. My grandma made them, my mom, my aunt – everybody! In my toddler years, I enjoyed only a sweet version of blini, but when I started school, any version of these pancakes were making my taste buds happy. 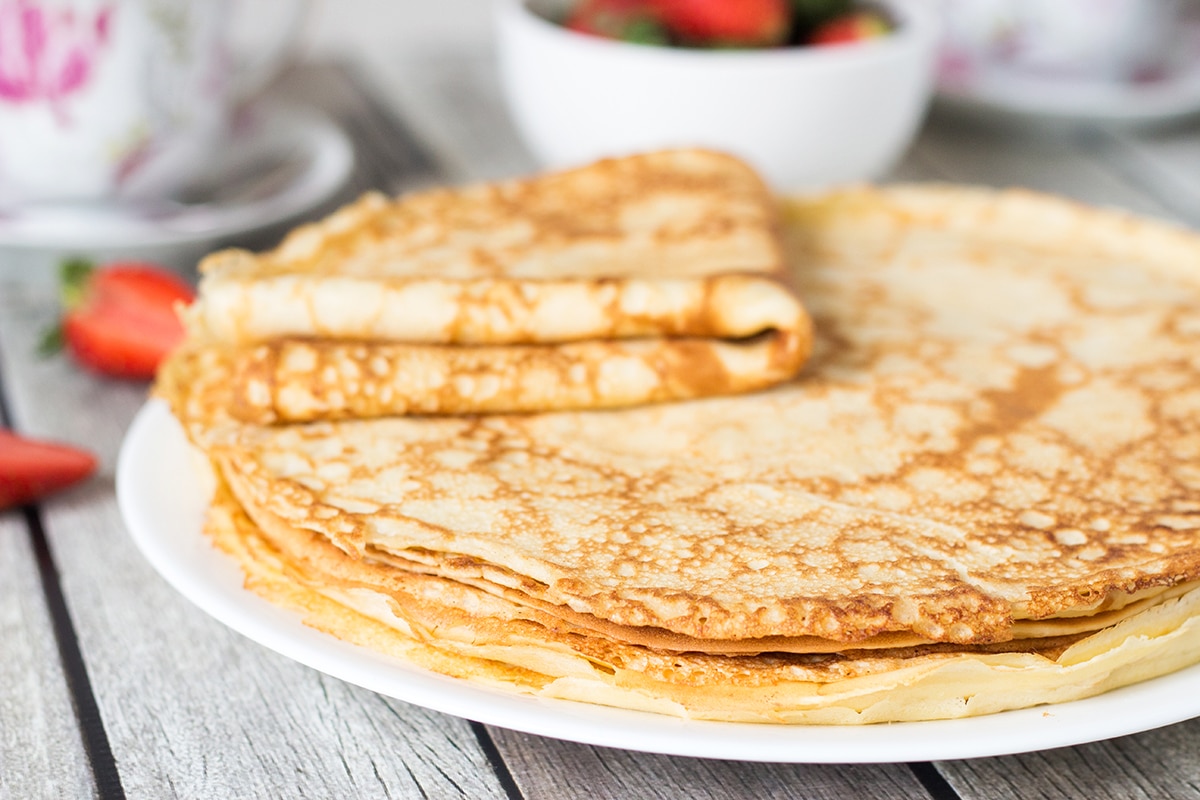 Blini should be very thin, just like crepes. Some people consider blini a general word for any kind of Russian pancakes: thin, thick, small, big ones, but that’s not entirely true. Blini are always big (the size of a pan), while the smaller and the thicker ones are called Oladji. Actually, it’s not a strict rule. If you will ever visit Russia and call small and fluffy pancakes blini, everyone will understand you and no one will say anything to you! No worries. I myself sometimes use this word for every Russian pancakes out there. 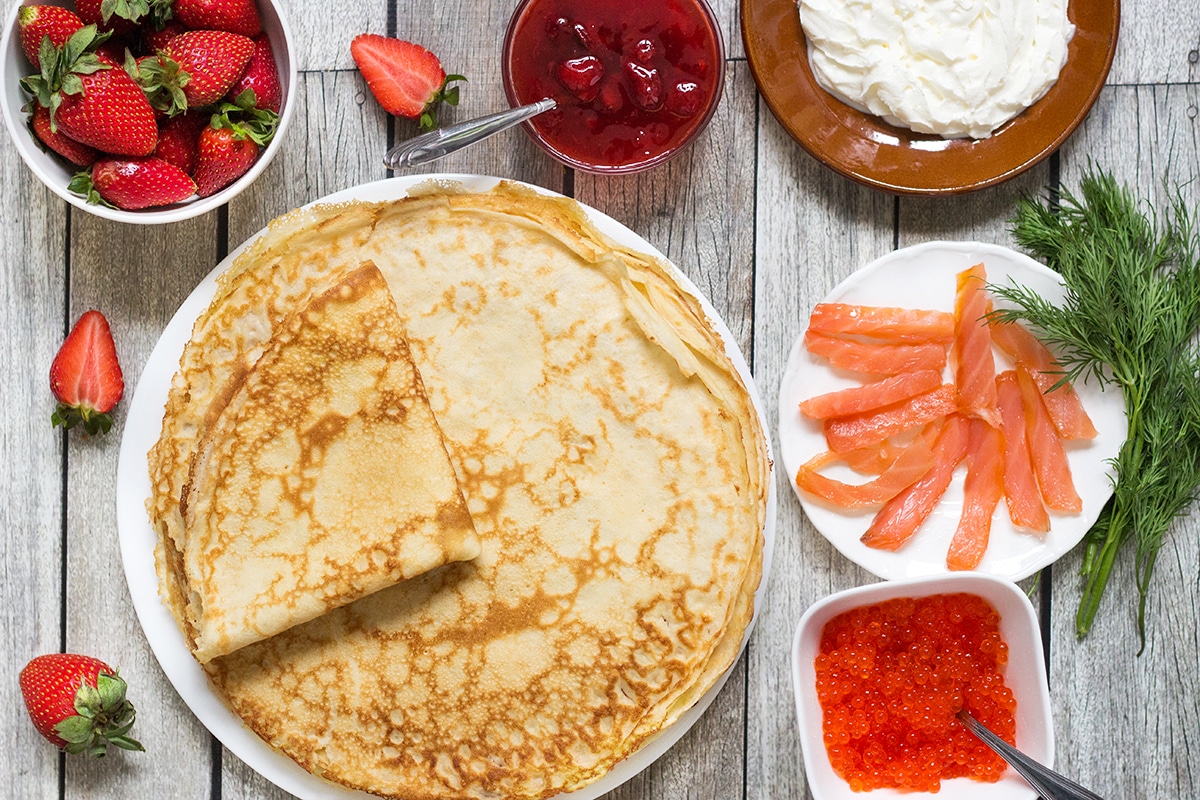 There are hundreds of different variations of pancakes in Russia. For example, blini can be made not only from wheat flour. Rye, buckwheat and barley can also be used. Also, you can make the pancakes big, but thicker at the same time! The leavening agent is used in this case. The liquid can also differ: water, milk, buttermilk and other options can be used. I am not even talking about a vast variety of fillings and toppings. Just off the top of my head: cottage cheese, cabbage, ground meat, mushrooms, chicken, jam to name a few. You can put all this stuff on top, roll into a tube, or roll a filling into a pre-fried pancake, and lightly re-fry it. So many options! By the way, you can check out my Russian cottage cheese pancakes I made a few days ago! 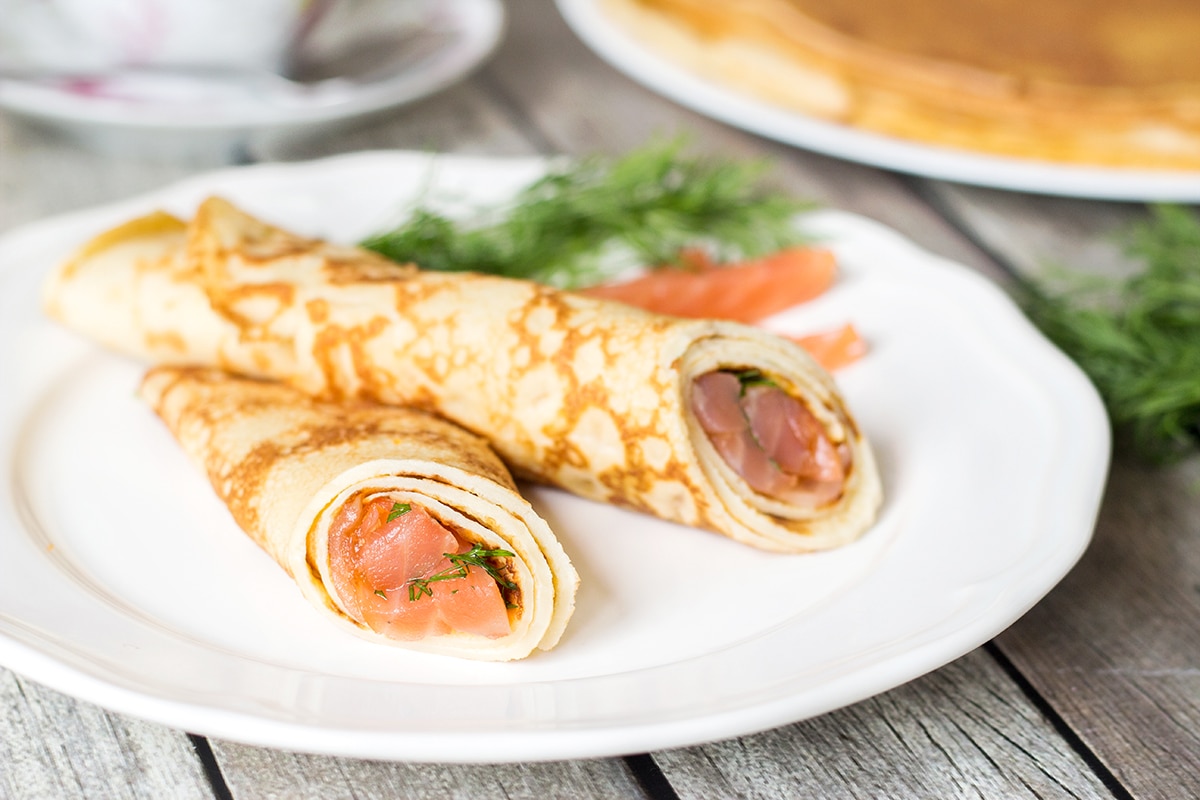 Russians love pancakes so much, they even have the annual festival when tons of blini are eaten at homes and in the streets. The festival is called Maslenitsa and is celebrated during the last week before the Great Lent. It’s actually not the pancakes people are celebrating, Maslenitsa symbolizes the end of winter and the coming of spring. However, there is no Maslenitsa without the pancakes. That’s for sure. We are celebrating this festival and eating pancakes in Lithuania too. I think this tradition was transmitted through many countries because of the Soviet Union. 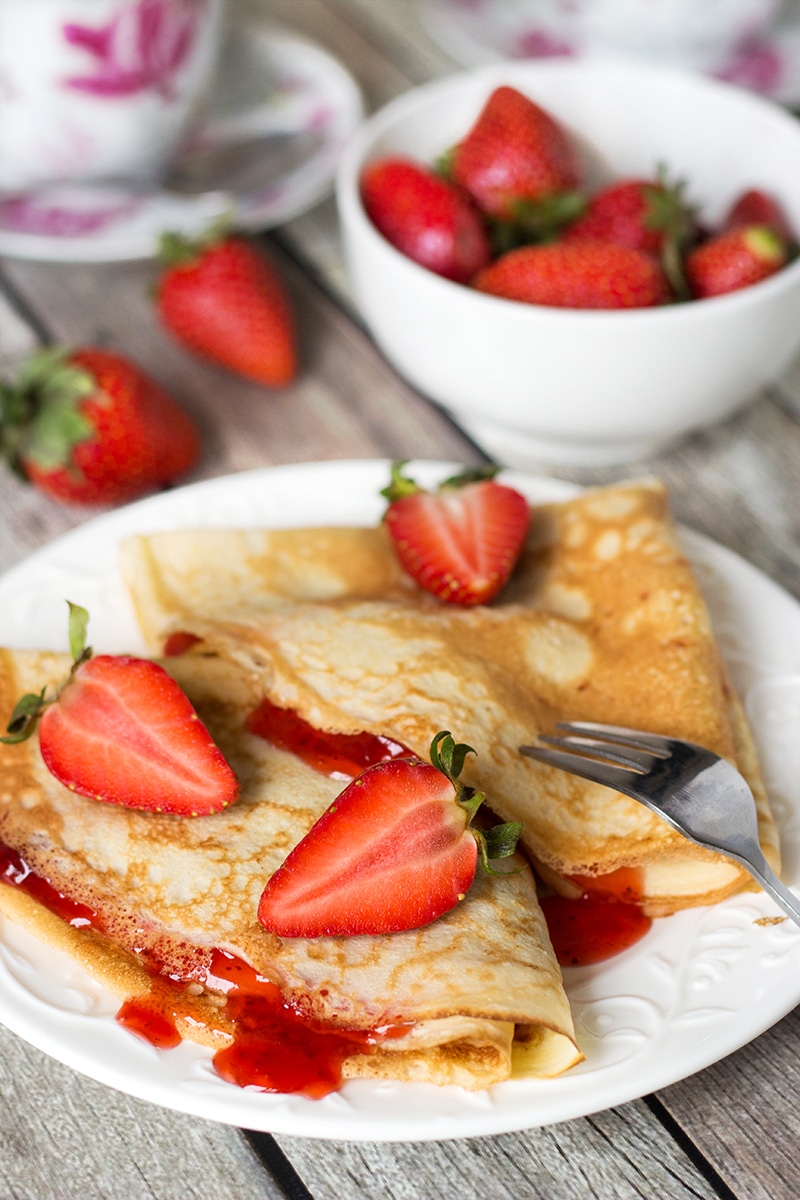 As you see from the pictures, I made both sweet and savory versions of these traditional Russian pancakes. I wanted to show you that they are amazing both ways! The first savory topping includes sour cream and caviar. Russia without caviar? Come on! The second one is with salmon and dill. Great combo. For the sweet version I’ve chosen strawberry jam – probably the most popular one in Russia. However, you can eat your blini with any jam you like. So what are you waiting for? Go and make these fantastic pancakes right now. You just can’t miss this goodness!