This French-German pizza has quite a few names: Tarte Flambee, Flammekueche, and Flammkuchen. It is crispy and features bacon and onion on top. Really simple and easy to make! 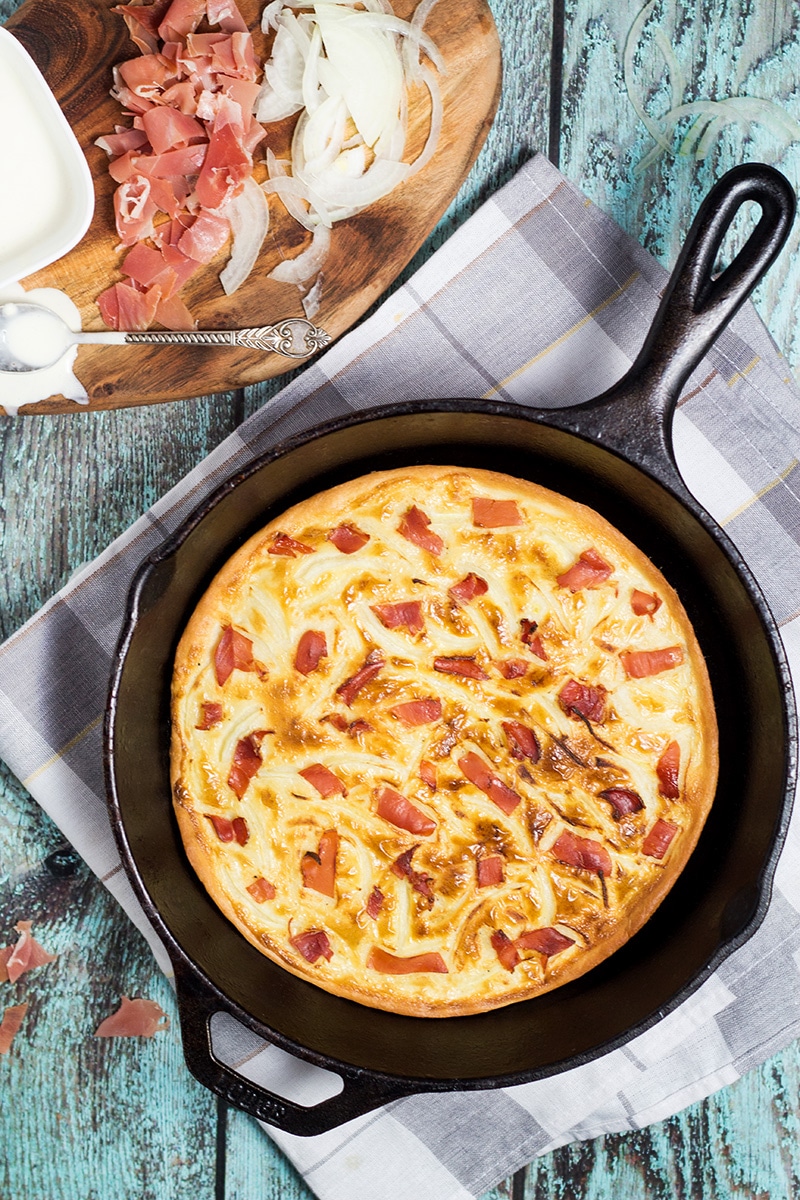 This is the first time I actually don’t know to which country the recipe belongs. How is that? No, it’s not one of those situations when 5 countries claim to be the founders of the dish. In this case everything is pretty clear – the recipe belongs to the Alsace region, which is located in France. The dish is French then – you will tell me. Not so simple, my dear reader. The control of this region was exchanged by France and Germany four times in 75 years! That’s why our today’s recipe – Tarte Flambee, has a German name too – Flammkuchen. Moreover, it has the Alsatian name too -Flammekueche (yes, this region has their own authentic language, but today the one and only official language there is French). 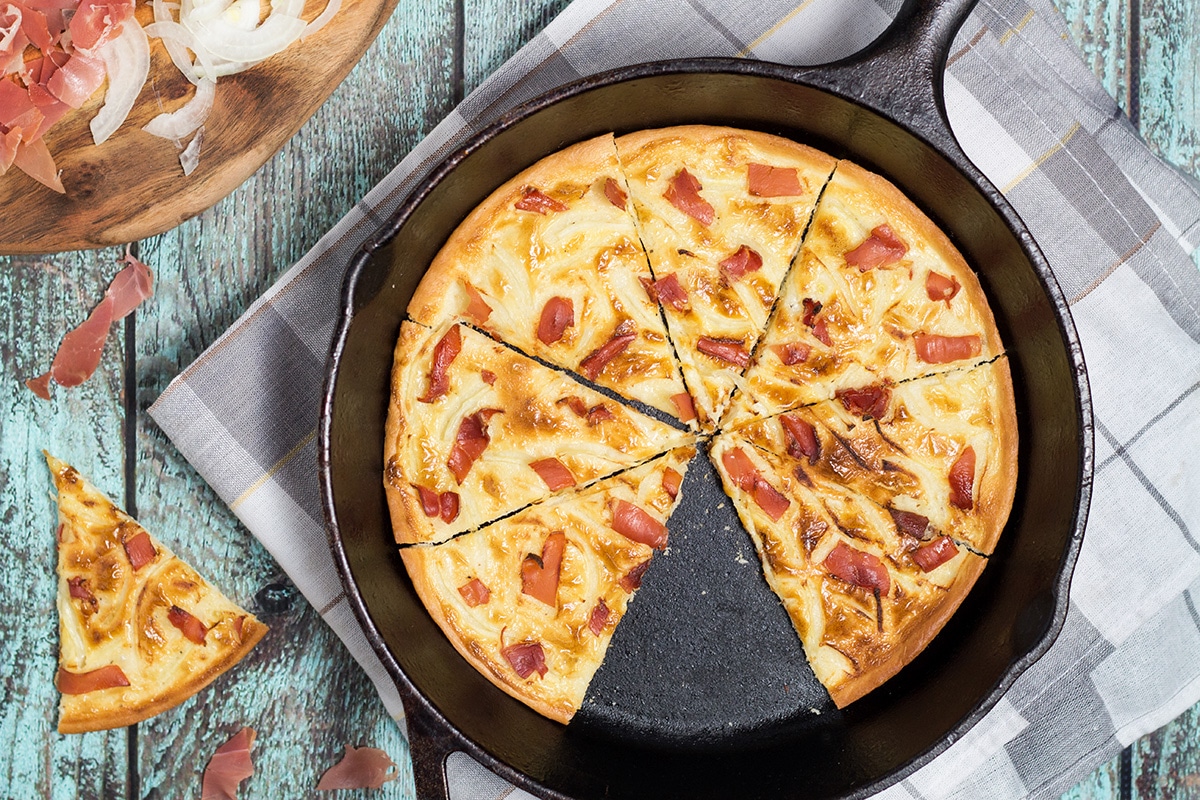 That’s why it’s really hard to say whether Tarte Flambee is French or German. The majority of websites refer to this dish simply as Alsatian. Well, alright then! Enough of history – let’s move on to the food. So what Flammkuchen is about? It’s a flatbread topped with Crème fraîche (it can be substituted with sour cream) based filling, raw onions and bacon. It actually looks like pizza, it even uses a pizza crust, but be sure not to call it that in front of Alsatians!  Many people call it German pizza though. 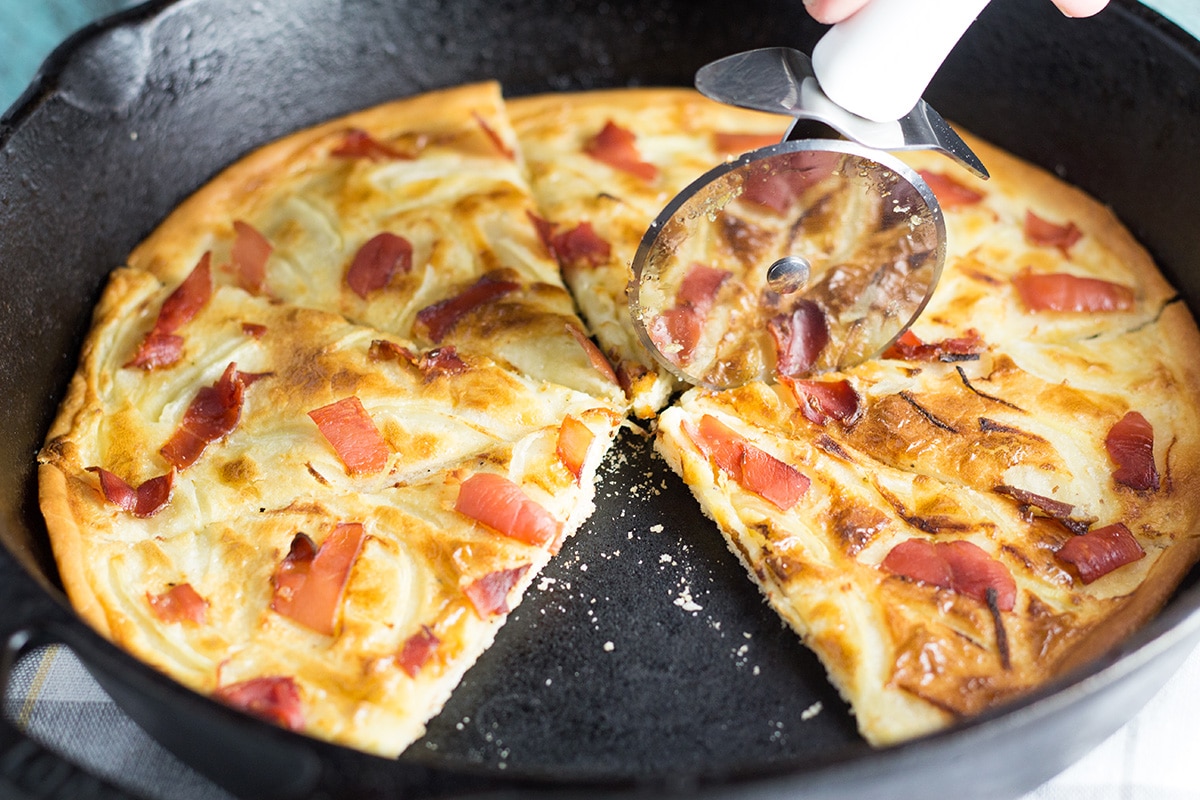 Talking about the pizza dough, you can use either store-bought or homemade for this recipe. It works both ways. Any pizza dough is fine. I’ve made a homemade one as I like it more. Tarte Flambee requires the dough to be rolled out very thinly. The base should be crunchy.

It also has to be baked at high temperature. The higher the better (just crank the oven to its max). That’s why a pizza stone is recommended for this recipe. However cast-iron skillet or sheet pan work well too. Even the name of this flatbread translates as “flame cake”, “pie baked in the flames”. 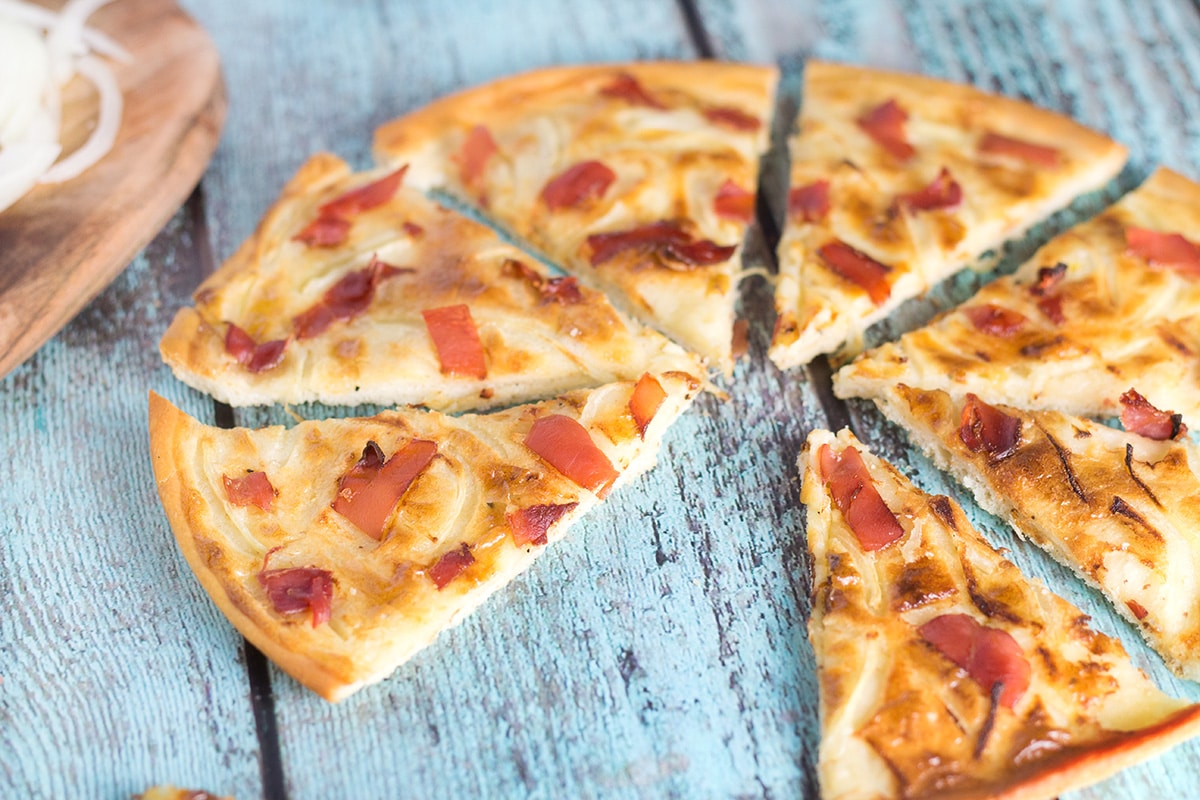 I loved this Alsatian treat a lot. I love that it’s paper-thin and crunchy, I love the savory taste, everything. It tastes not like any pizza you have ever tasted. It’s super simple but somehow it delivers! Call it Alsatian magic.

For the crust: (Or skip these and use 1 pound of store-bought pizza dough)

The crust was adapted from Yummy Addiction blog. Thanks, Jovita, your blog is great and this is my go to recipe every time I make pizza at home!