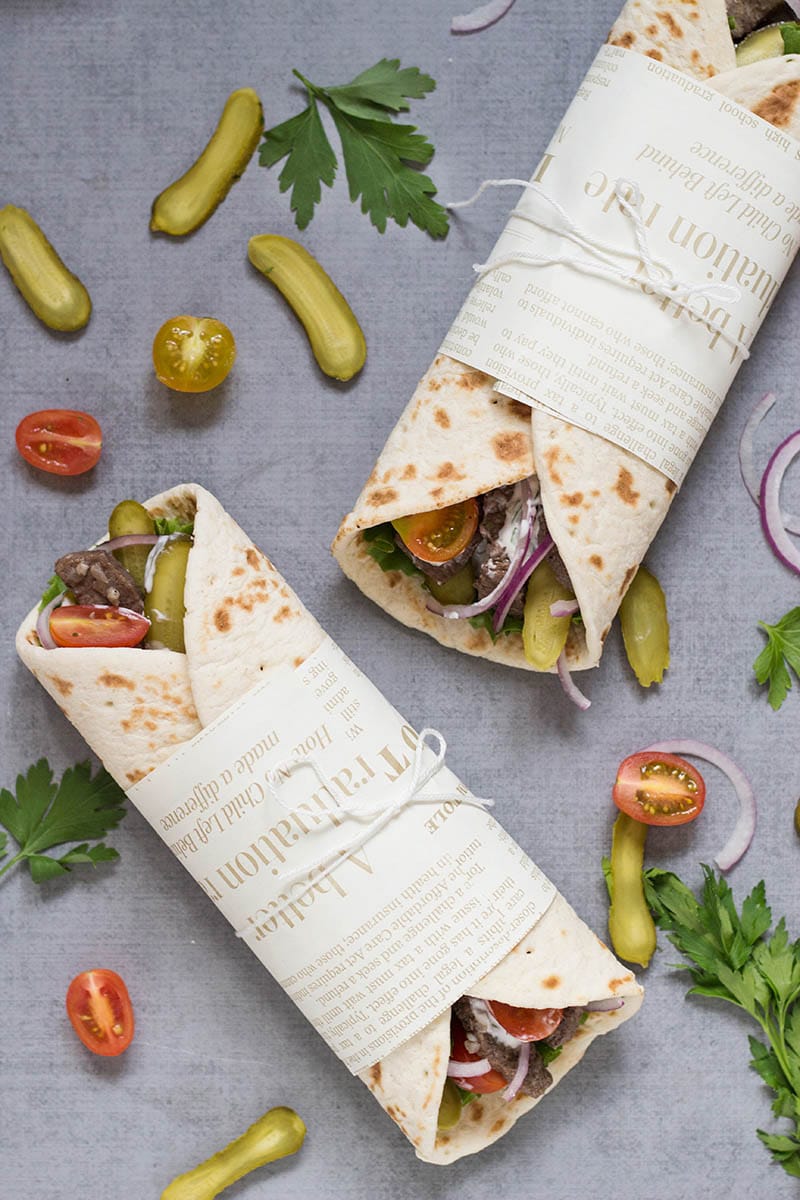 I am always excited to feature a new country on the blog. The feeling of exploring a new cuisine is fantastic! You can call me a world cuisine addict, because I surely look like one when something exotic and never tasted before is sizzling in a pan. I am not even talking about the moment when the cooked food touches my taste buds. Pure enjoyment! 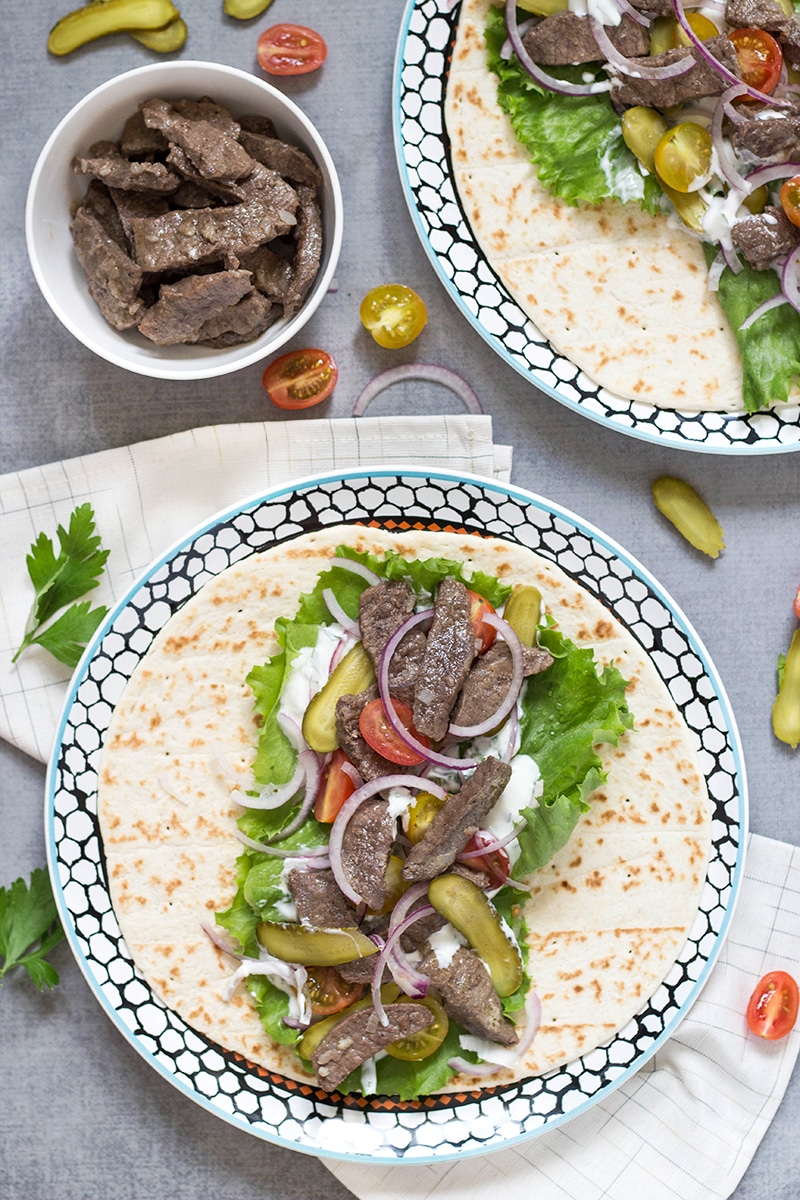 Today I invite you to take a sneak peek of the Lebanese cuisine. For those of you who don’t know, Lebanon is a Middle Eastern country with rich culinary traditions. I’ve chosen to make one of the most popular Lebanese dishes – Shawarma. Other names include Shawerma, Schwarma, Shwarma, to name a few.  It’s a very popular street food in Lebanon and many other Middle Eastern countries (just like falafel). It is said that the homeland of Shawarma is Turkey and it was brought to other countries by the Ottoman Empire (it’s the Turkish empire which existed a hundred years ago). Basically, Shawarma is a sandwich: meat, veggies and sauce are wrapped in a pita bread or lavash to create a mind-blowing experience. You can call it a Middle Eastern fast food. 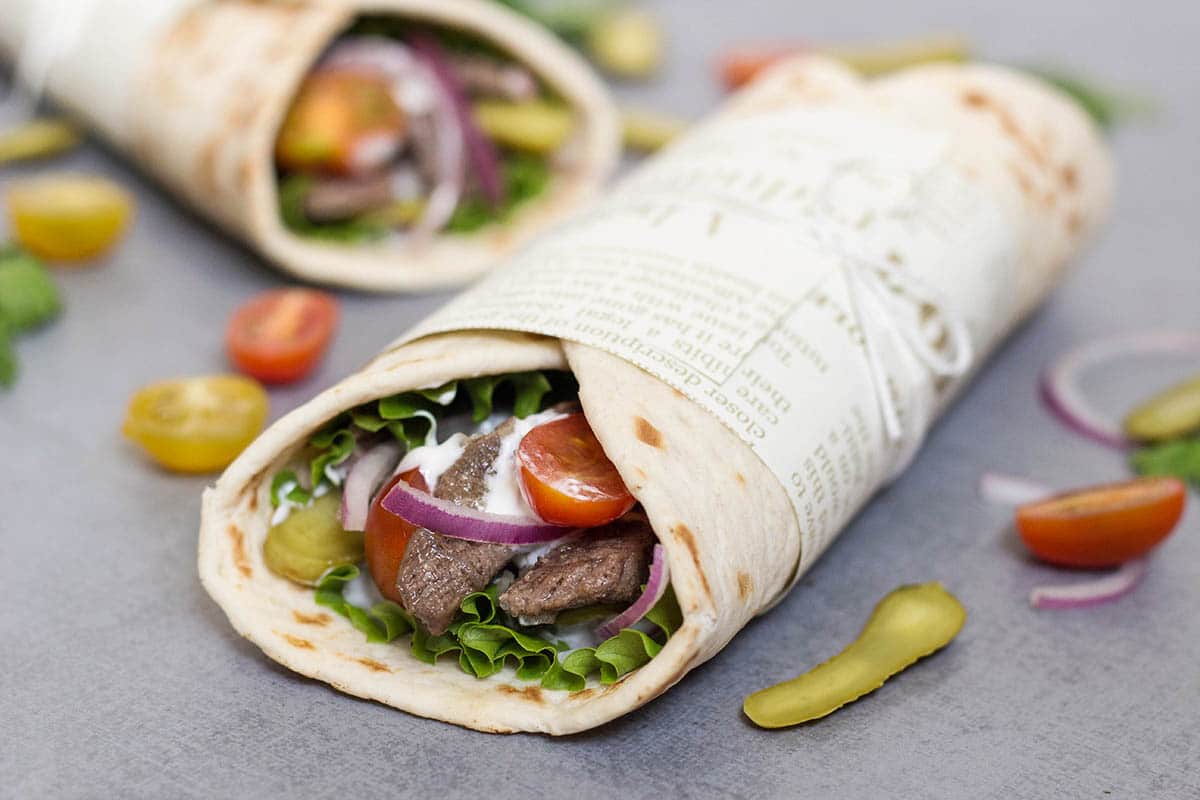 This Lebanese sandwich can be made with various kinds of meats: chicken, lamb, beef, turkey, veal, and others. My choice stopped on a beef Shawarma this time. Traditionally, in street food stalls and local restaurants, Shawarma is made by placing the meat or a mix of few meats on a vertical spit and grilling it for hours. Wikipedia says that even the name Shawarma comes from the Turkish çevirme, which means ‘turning’. For every sandwich some meat is shredded while the remaining meat keeps grilling until the other client comes. Obviously, it is impossible, or possible but not very realistic, to replicate the authentic cooking method at home. Don’t worry though, the beef Shawarma we are going to make using a simple pan is as good! 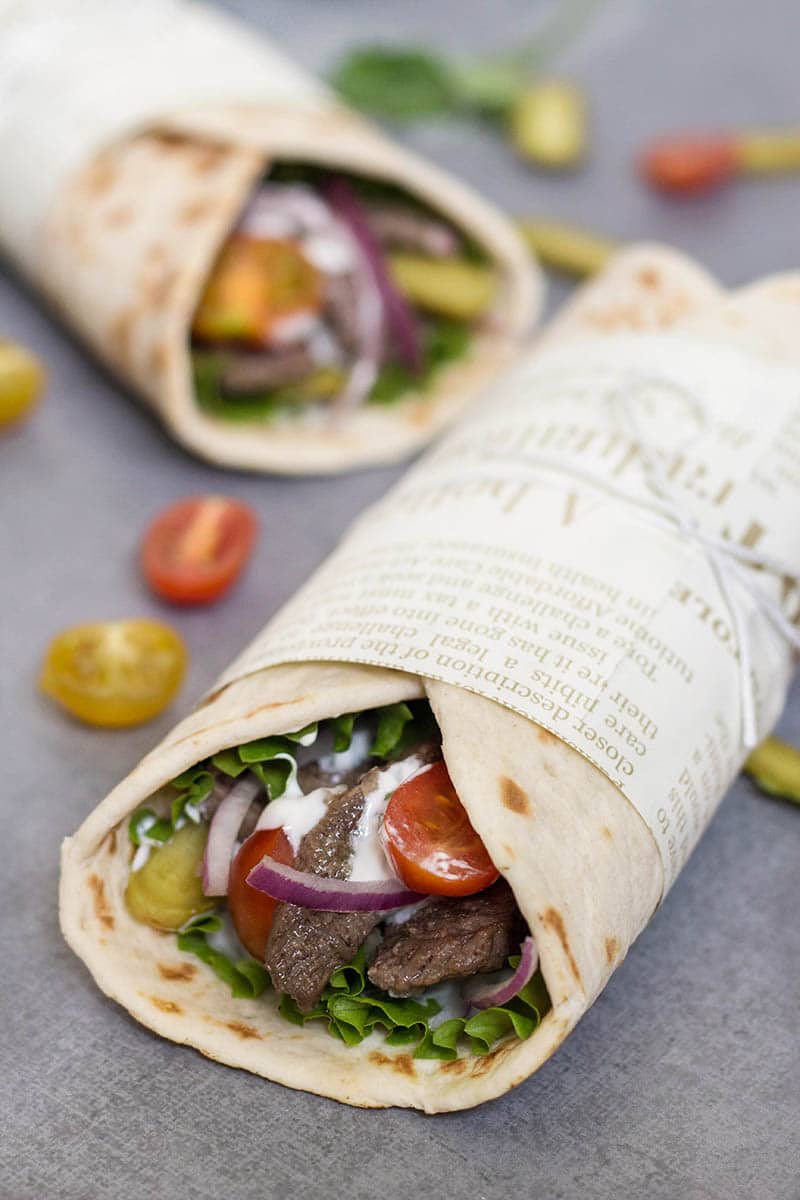 A very important part of Shawarma is a sauce. You can use any sauce you want, but I made the traditional tahini based Tarator sauce popular in Lebanon and other surrounding countries. Don’t confuse it with Tartar, it’s not the same! Actually, these two sauces are not even alike. Tarator is pretty simple, and requires only tahini, garlic, lemon juice and parsley. But it’s so GOOD! You can use this sauce on pretty much anything: all kinds of meats, seafood, veggies. I adapted the sauce recipe from Saveur. Thanks to them!

This beef Shawarma has everything you need: flavorful marinated meat, veggies, and the fantastic sauce. The end result is a juicy, amazingly delicious sandwich. Perfect on the go meal!

Recipe is adapted from Taste of Beirut by Joumana Accad