Churros Con Chocolate is a Spanish favorite and it is guaranteed to become your favorite too. These little treats have spread all around the globe and I can easily understand why. Crispy cinnamon-y sticks served with hot chocolate for dipping. Who wouldn’t love that?

If you will ever stroll down the beautiful streets of the Spanish capital, Madrid, in the morning, there is a big chance your eyes will catch stands offering Churros Con Chocolate. I bet it’s not the first time when you hear about Churros, but if it is, Churros are sweet, deep-fried dough treats. Usually they are dipped in a hot, thick, pudding-like chocolate, hence the name – Churros Con Chocolate. They can be called a national breakfast in Spain, because the popularity of these little guys is unbelievable. Yes, obviously, it’s not the best breakfast option if you are on a calorie watch. But they are so damn good! There are foods that are really worth putting your diet on hold. Churros are one of them. 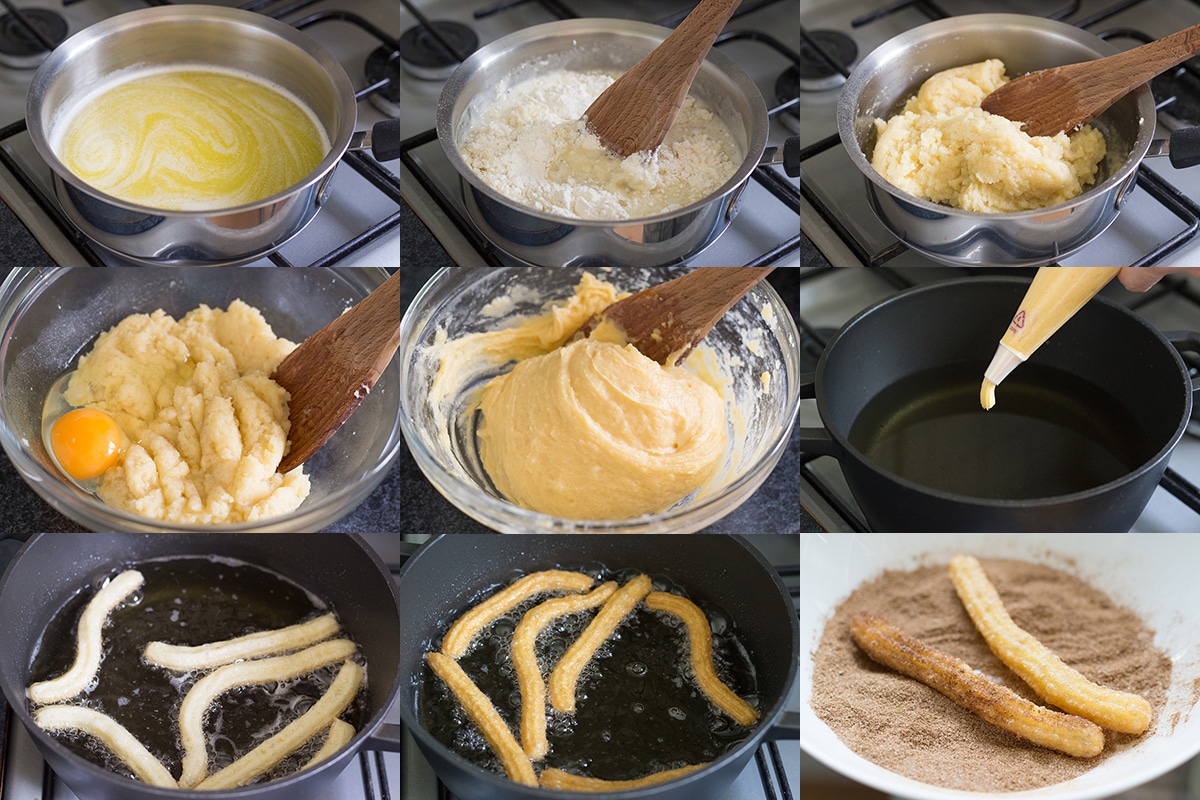 Most Americans are well-acquainted with these little treats, but mostly because they are also popular in Mexico. Many even think that these fritters are Mexican (I am not sure why), however, after my own little research, I can confidently say that Churros are Spanish. Yes, they are popular in many countries besides Spain, such as Portugal, France, the Philippines, Peru, Venezuela, Colombia, to name a few, but only in Spain they are considered a national dessert. 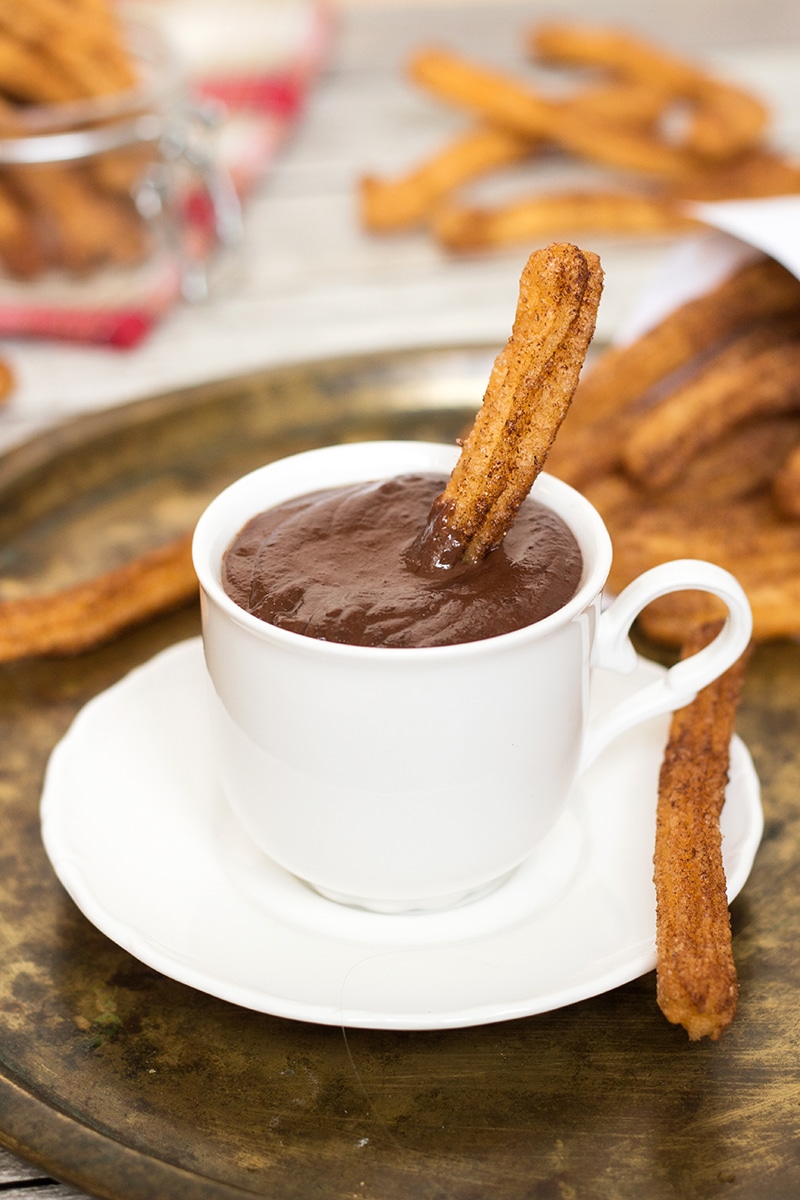 The origins of Churros are not clear. There are a few versions. The first one, which I like the most because it makes a perfect sense, is that they were brought to Europe from China. It is said that Churros were created from Chinese donuts, called Youtiao (I thought about making them for the blog few months ago). The only difference is that Asian treats are made by pulling the dough, while European are made using a star shaped nozzle. Another version says that Churros are originally from Spain and that Spanish shepherds created them, because they wanted a treat that is easy to cook in an open fire. It’s hard to say which version is correct (or maybe they both are wrong) but we should say a HUGE thanks to anyone who brought us this amazing snack! 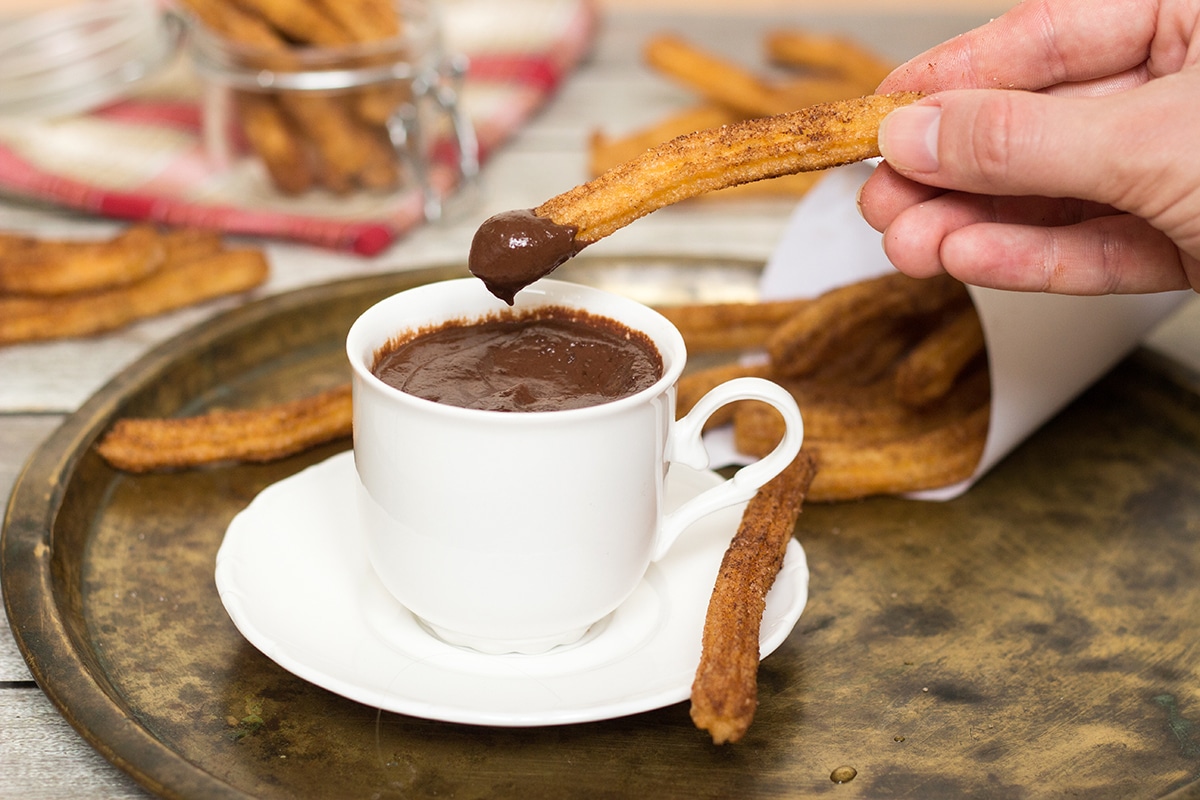 Churros themselves are really amazing. I love that they are rolled in a cinnamon and sugar mixture. BUT. The addition of the chocolate, the fact that we can dip these guys into the thick, sweet, hot chocolate – that’s what makes them fantastic to me! I am a huge fan of chocolate so it’s my paradise. 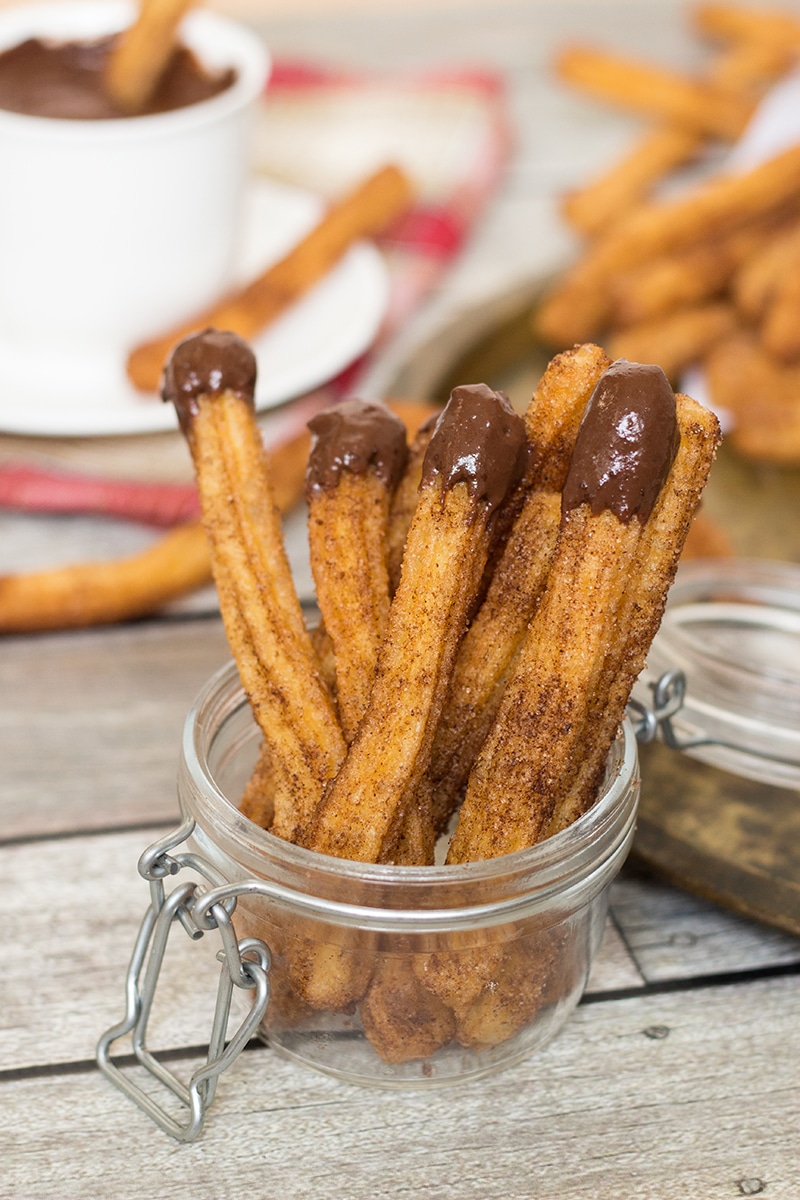 If you have never tried Churros Con Chocolate, do it. It doesn’t matter if you will make them for breakfast or not, they are great any time of the day. I would even say that it’s quite complicated to make them for breakfast, because Churros really take some time. Maybe on weekends. I had them with my evening tea and they were amazing. Adding them to my “things to taste” list when I will be in Spain!

For the hot chocolate: