Pastila is a traditional Moroccan Chicken Pie and it’s really awesome. Crispy outside with a cinnamon flavored chicken and almond filling inside, it has a sweet and sour taste, which is heavenly! 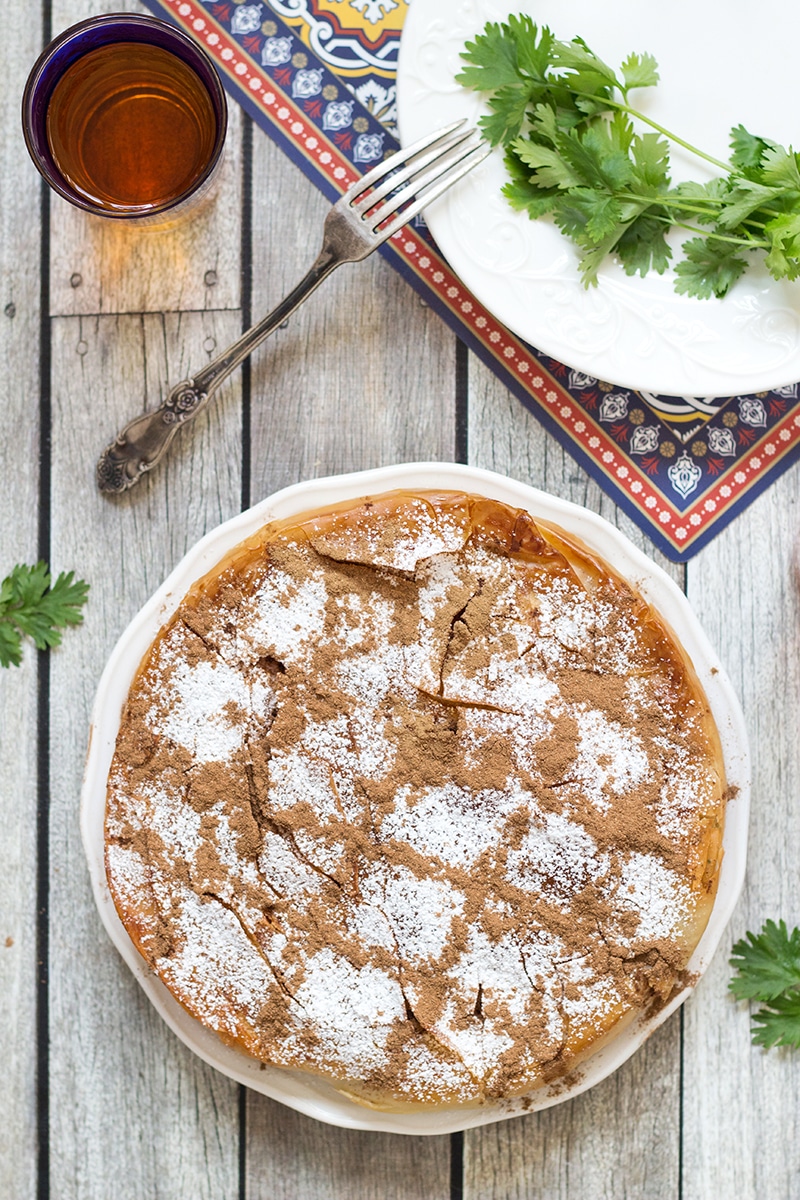 Moroccan cuisine is a frequent guest on this blog. I already made the famous Harira soup, semolina pancakes, traditional Moroccan bread, and wrote a comprehensive guide about Moroccan breakfast. Loved every one of them. If you think that I covered a big part of Moroccan food world with these four posts, you are so wrong. It’s only a tip of an iceberg! This African country offers so many awesome dishes that I would have to create a separate blog dedicated solely to it to TRY to make them all. This time I want to show you a legendary sweet and savory Moroccan dish called Pastilla, or B’stilla, or Bisteeya (there are more names but I won’t mention them all). It is usually served on special occasions. 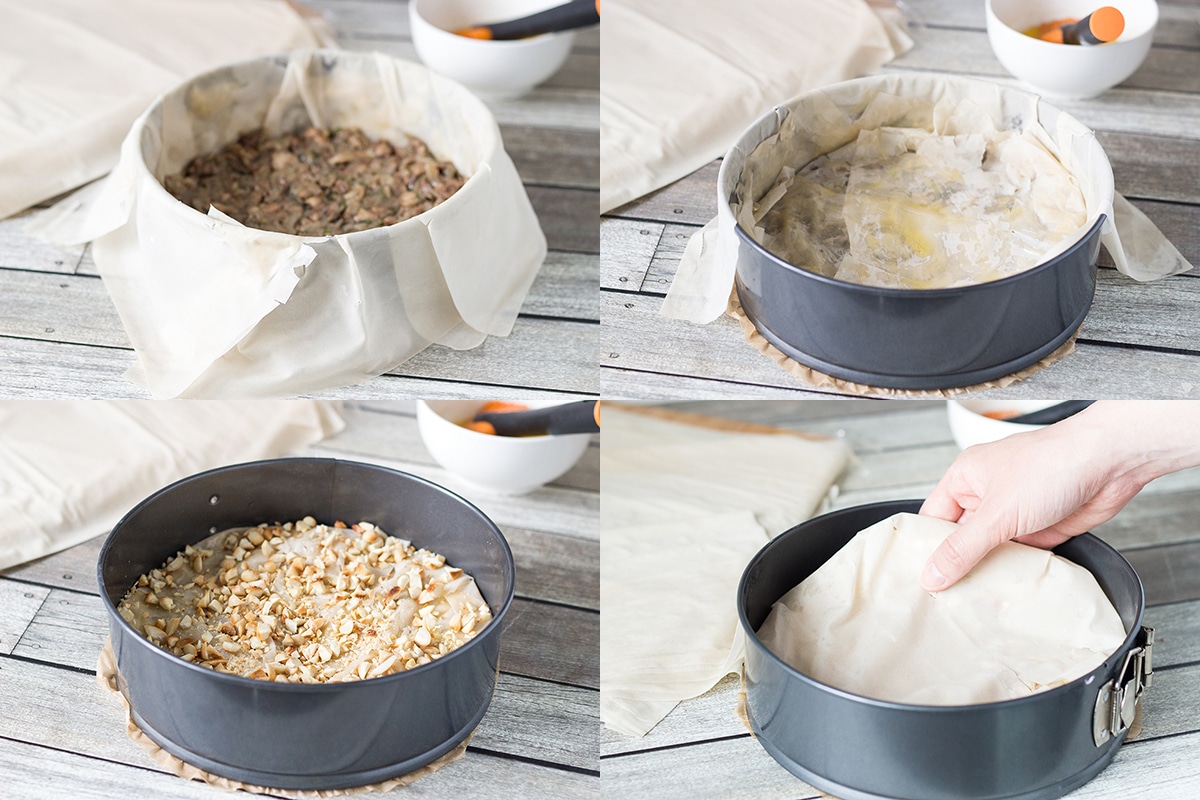 Authentically, it’s a pie made using puff pastry and stuffed with a sweet spiced pigeon, onions and almonds. Yes, you heard me right. Pigeon. Wait! Don’t close this post yet! Traditionally Pastilla is really made with a pigeon, but a version with chicken is popular too. That’s the one I made. Actually, my balcony (I am living in a flat) is getting attacked by pigeons all the time, so… I won’t lie, a thought went through my mind, for a second, to make a delicious pie out of them… I guess it would be a nice warning to all other pigeons trying to “visit” my balcony in the future, right? Well, unfortunately, I am a good guy with zero cruelty, so the pigeons continue to prosper in my little balcony. 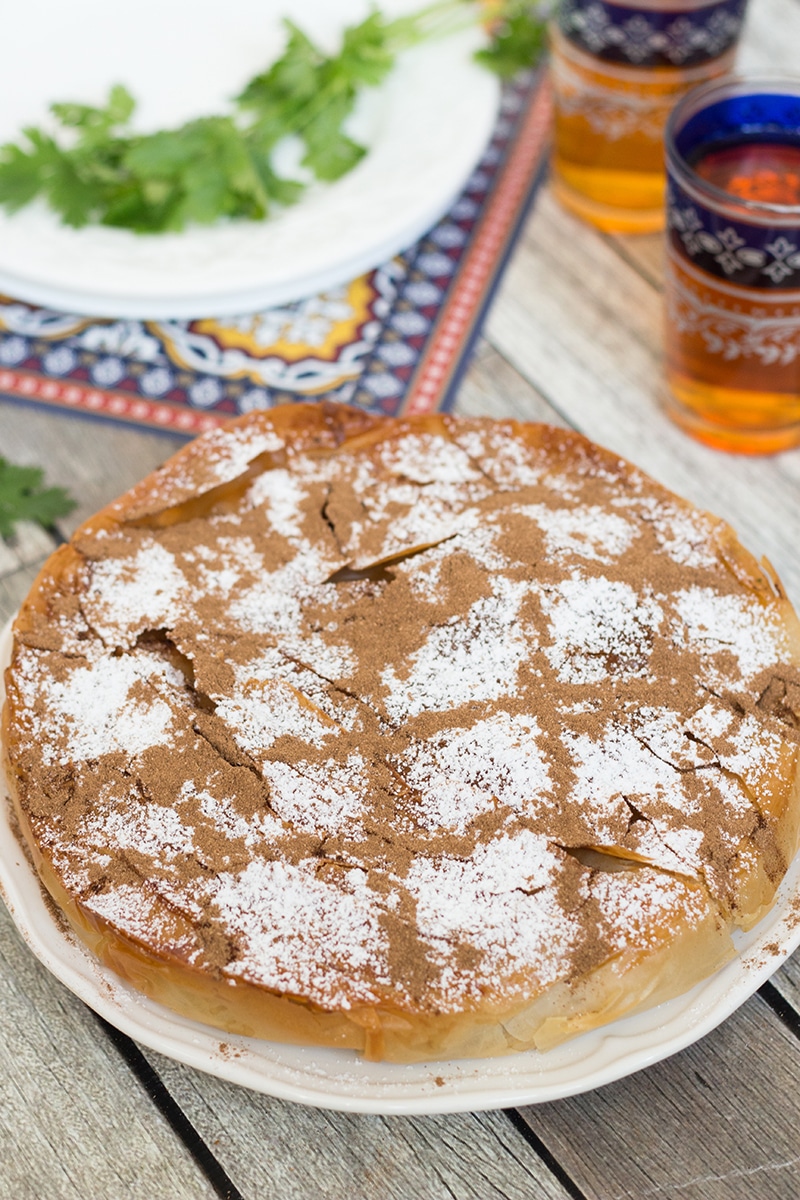 Ok, enough about pigeons, after all we are using chicken for our Moroccan Pastilla. First of all, lets talk about the dough. Moroccans use many different dough types for their Pastillas, but we are going to use the one that is the easiest to get outside of this African country – filo (or phyllo). I am pretty sure you will be able to find filo sheets in your local supermarkets. It is best to use large sheets, but it’s perfectly possible to make this pie using small ones too. You will just have to do more overlapping. 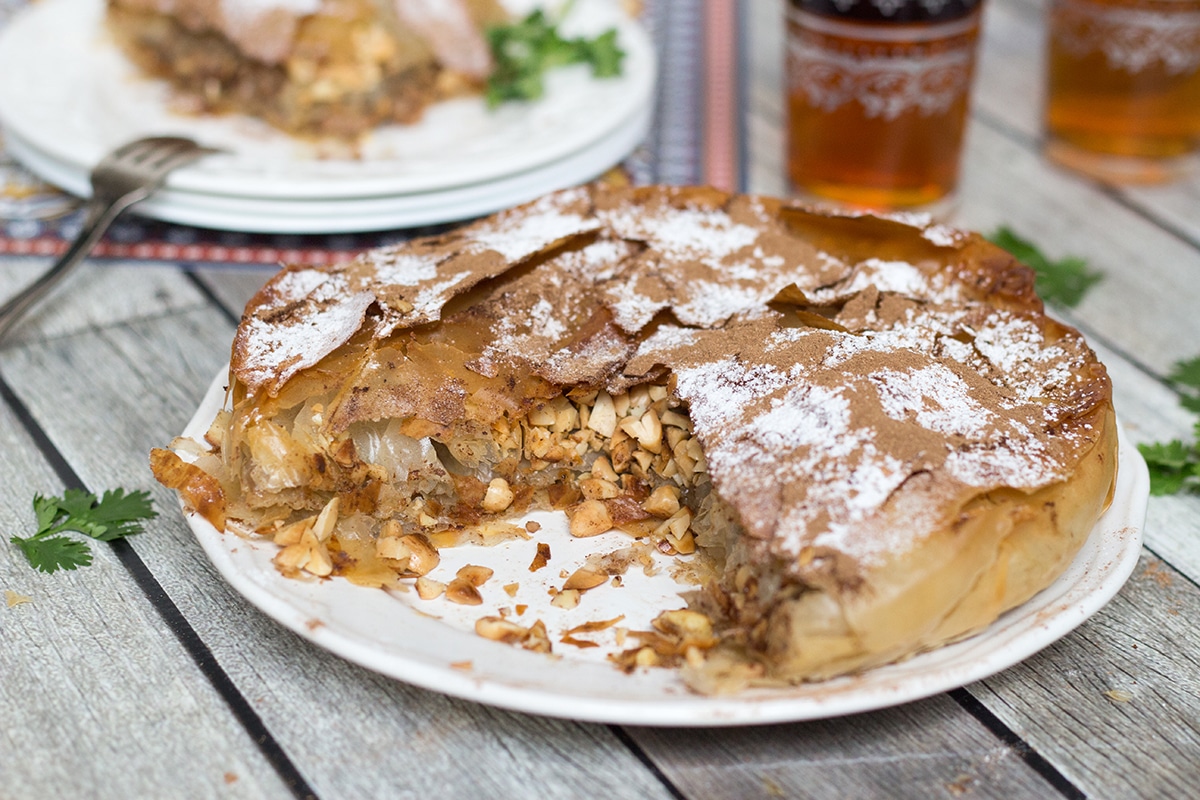 The taste of the chicken seasoned with ginger and cinnamon is unbelievable. Despite the fact that it is quite sweet, I wouldn’t call it a dessert. I tried such a combination for the first time in my life and I loved it right away. Together with a crisp, flaky pastry, fried golden onions, and toasted almonds it’s an undeniable winner. Don’t wait for a special occasion, try this sweet & savory Moroccan pie and it won’t disappoint you!

This sweet and sour Moroccan Chicken Pie is filled with cinnamon flavored chicken & almonds and encased in flaky and crispy pastry!

Adapted from Arabesque: A Taste of Morocco, Turkey, and Lebanon by Claudia Roden