Maultaschen is a big fat German version of ravioli. These dumplings are usually stuffed with meat and spinach mixture but I also made a vegetarian filling consisting of mashed potatoes, spinach, and topped with cream and mushrooms! 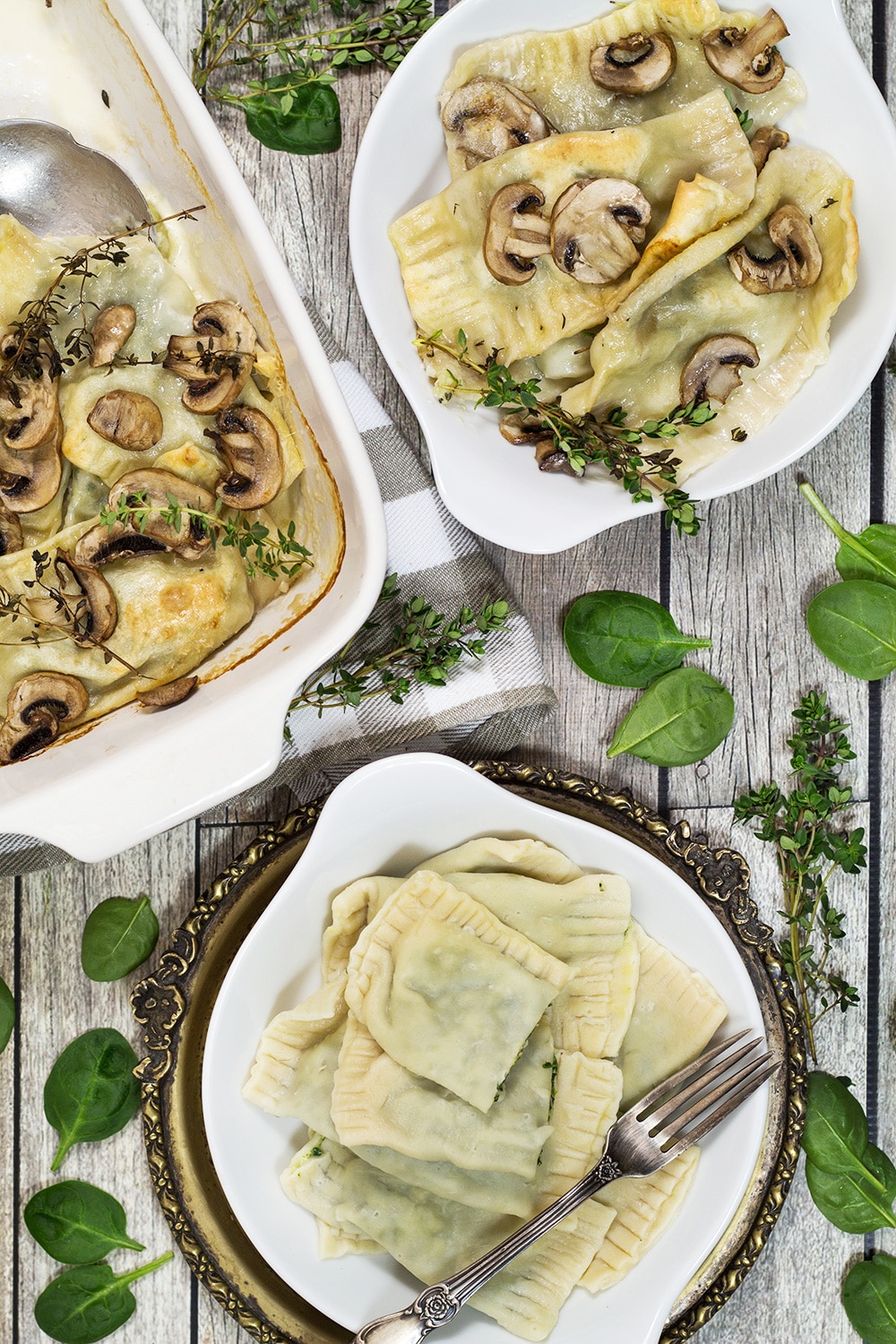 I love cooking, I really do. Even if the recipe is a challenging one and it takes a couple of attempts to get it right, I still enjoy the process. However, there are a few types of dishes that are not my cup of tea. When making them, the level of enjoyment reduces and sometimes, not too often, I can even get frustrated. One of such dishes is dumplings. All kinds of them. Ravioli, pelmeni, jiaozi, gyoza, it doesn’t matter. Each one of them is a challenge to me and I spend unthinkable amounts of time in the kitchen trying to master these evil creatures! 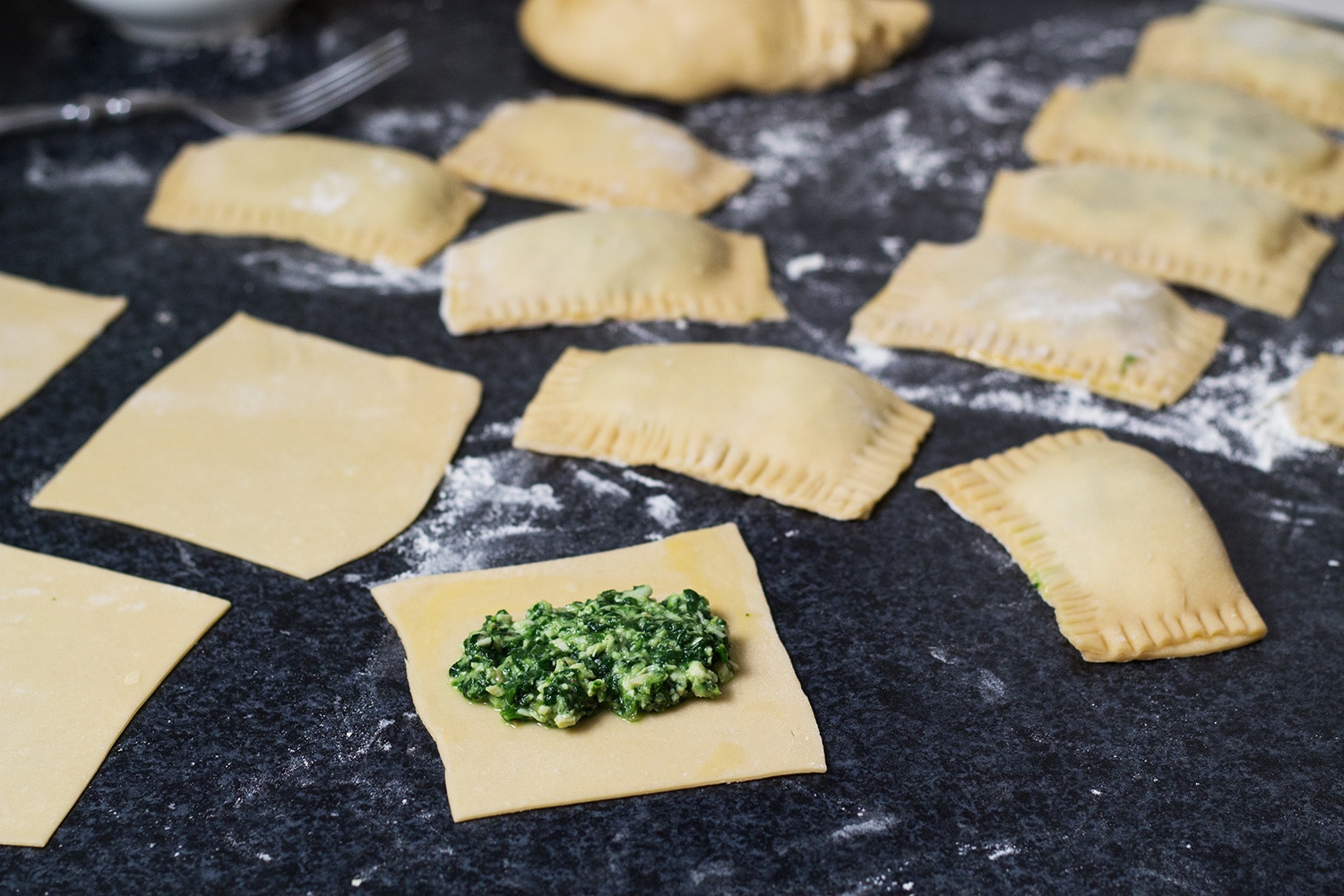 BUT. Here is another thing about me. I also love challenges. Not only in the kitchen, everywhere. You know, there are people who hate losing. Me – I love when somebody crushes me in basketball, bowling, anywhere. Be my guest. It means that I have a goal to get better and eventually win against my opponent. This feeling is amazing. It’s way better than just get an easy win all the time. That’s why I challenged myself today and made these German dumplings / stuffed pasta called Maultaschen. These are like big fat cousins of Italian raviolis! 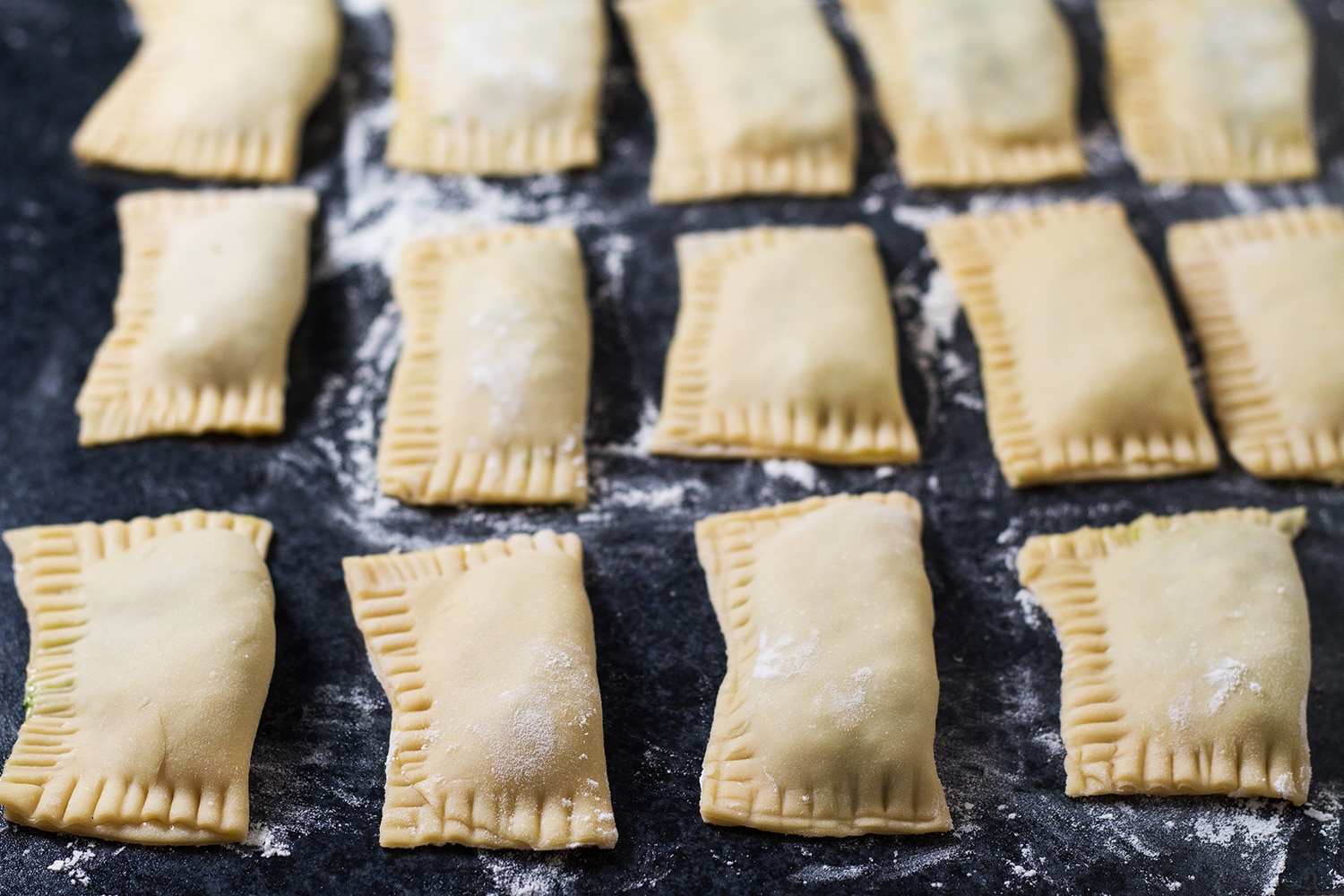 The dish originated in the region of Swabia and sometimes is called Swabian Pockets. While it’s not surely known why these dumplings are called Maultaschen, Wikipedia offers a few interesting versions. First one suggests that the word derived from a combination of Maul (mouth of an animal) and Tasche (bag). It would mean feedbag then because of the appearance of the dumplings. The second version says that the name derived from an archaic word Maultatzen or Maultatschen, meaning slap in the face. How it’s related? You will laugh. It would be a comparison between a swollen cheek after being slapped with the shape and appearance of the dish! 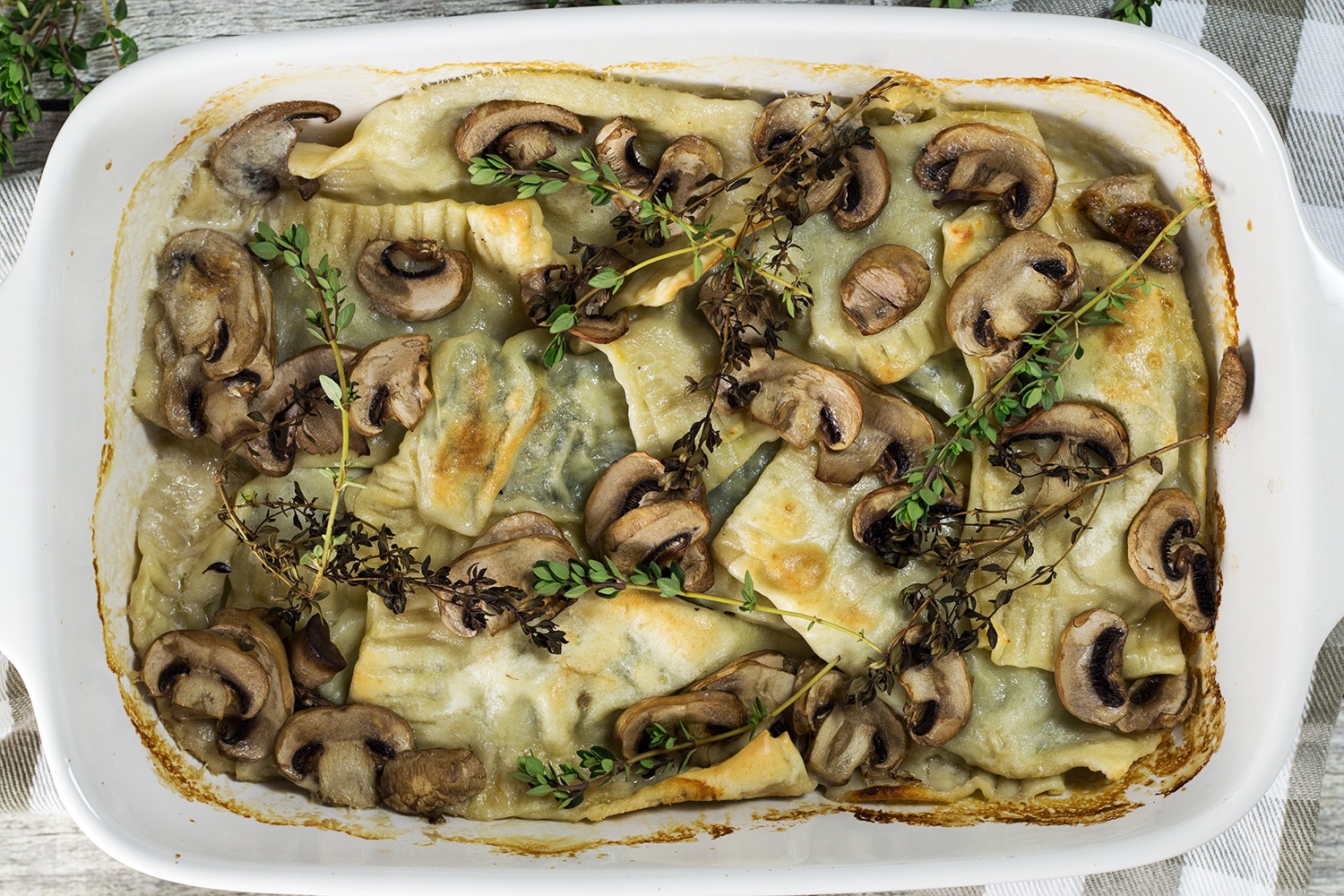 But it’s not even the funniest part. A Swabian German nickname for this dish is Herrgottsbescheißerle, meaning “small God-cheaters”. Such a nickname was born because of a funny association of Maultaschen with the Lent days, when Christians abstain from eating meat. Germans say that the meat in this dish is hidden under a layer of pasta so the God can’t see it! Creative Germans, huh? 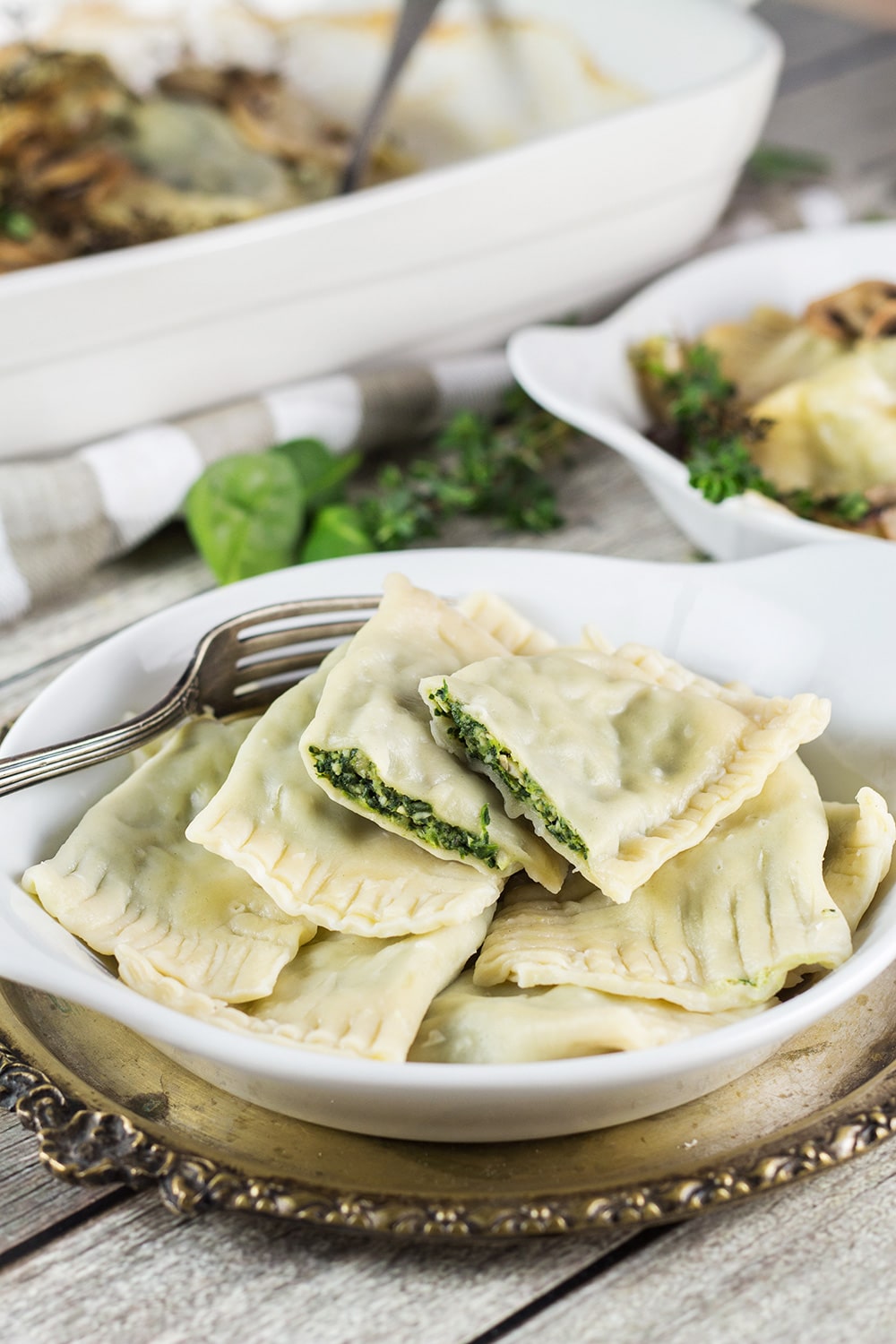 A few words about the dish itself. These big dumplings are usually stuffed with a combo of spinach, meat, onion, and bread. However, as you can imagine, today Maultaschen are made with a variety of different “modernized” fillings too. That’s why I decided to include both: a traditional meat-filled one and a “modern” vegetarian version filled with mashed potatoes, spinach, and topped with cream and mushrooms. I hope you will like them both! 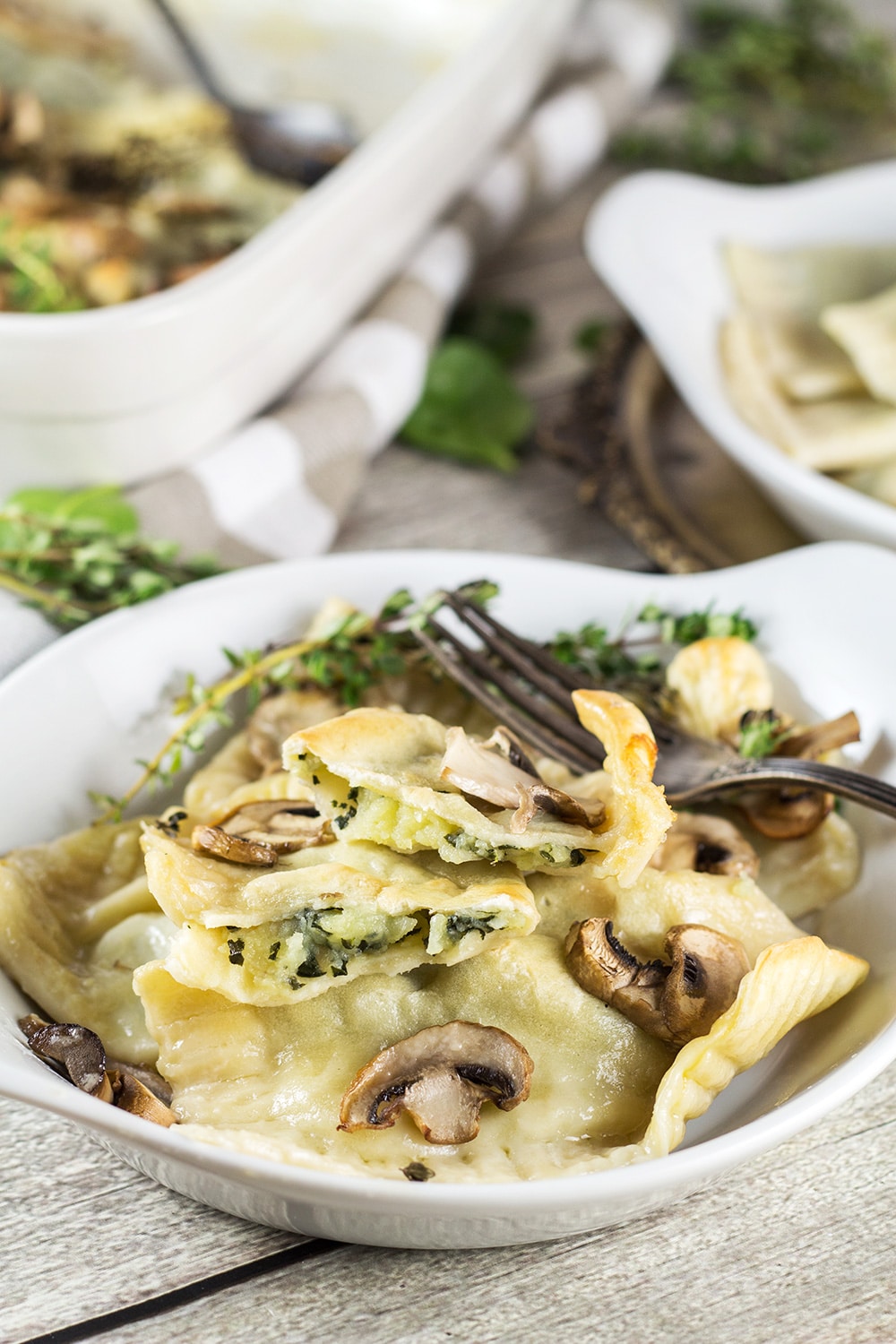 Meat-filled (traditional) Maultaschen are often served in a chicken or beef broth, like some sort of a soup, but I decided to serve them with some sour cream or yogurt on top because that’s how I like my dumplings the most! It’s up to you, though. They are fantastic any way!

The amount of dough is measured for one of the fillings. If you want to make both of them, double the ingredients of the dough. The traditional filling is adapted from The German Cookbook by Mimi Sheraton, the modern filling - from New German Cooking by Jeremy and Jessica Nolen

What is Tapioca Flour + 16 Must-Try Recipes