Juicy, lemon-y, and packed with flavor, this Moroccan Chicken Tagine is one of the most popular dishes in the country. The recipe uses preserved lemons and saffron threads so be ready for something special! 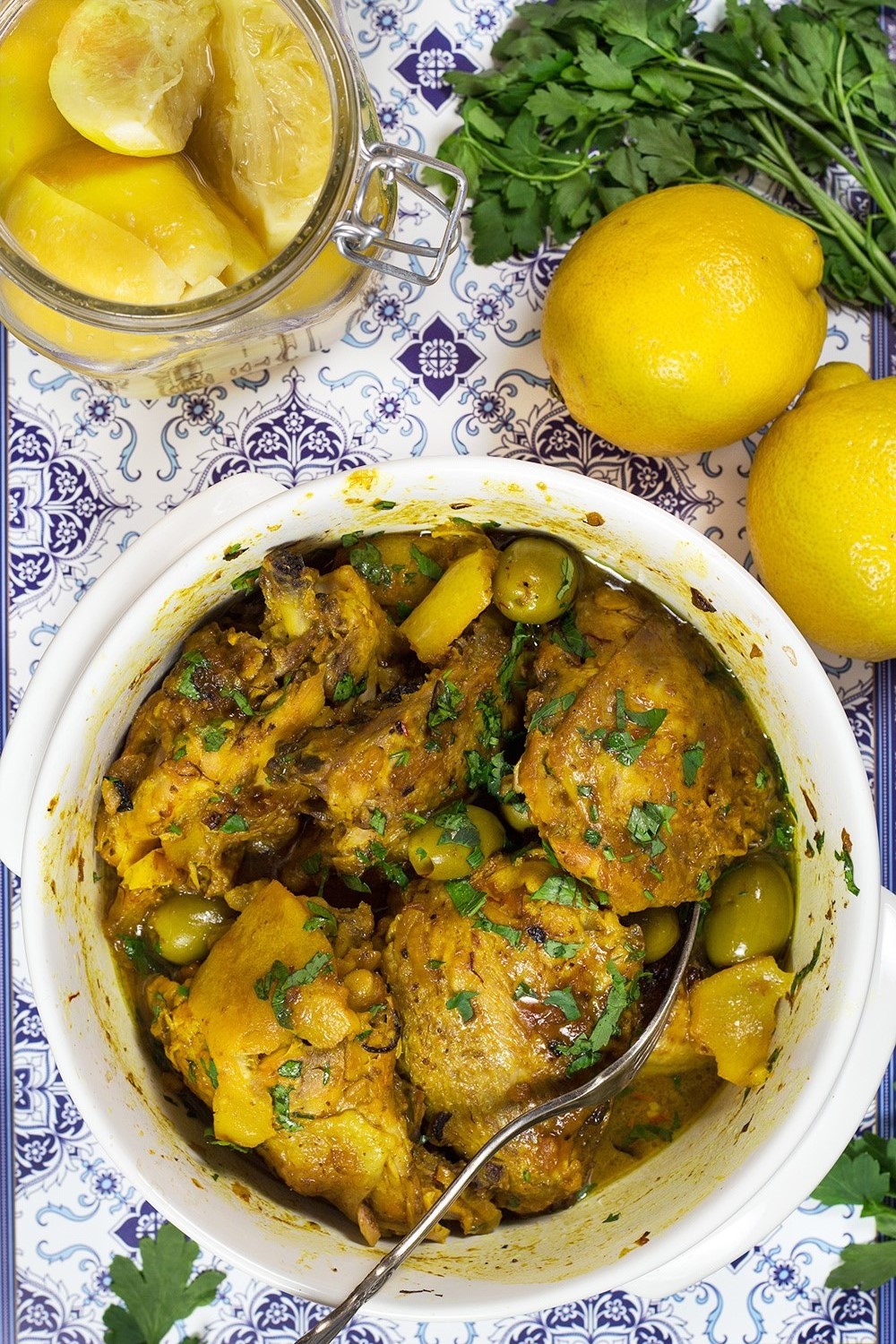 Finally, the day has come! The day when, after a grueling month of waiting, I was able to open a jar of my homemade Moroccan preserved lemons and for the first time in my life savor them. You can read about my emotions in the post mentioned earlier, while here I will talk about how I am using these little pickled guys. The possibilities are endless!

Sauces, salads, marinades, stews, tagines – preserved lemons will enhance the flavor of any of these culinary creations. When the aroma from the opened jar reached my nostrils my mind immediately started flipping through options for the usage of these bad boys. However, it wasn’t until I grabbed a few Moroccan books I possess that I found a perfect idea for my very first experience with them. Moroccan Chicken Tagine!

A little explanation for those of you who are not familiar with the word “Tagine” (can be also spelled as “Tajine”). It’s a special North African earthenware pot and all the stews that are cooked in this dish are named after it. Does it mean that you won’t be able to make this recipe without this pot on hand? Don’t worry, it doesn’t. I don’t have it either at the moment (I plan to get it soon, though). A Dutch oven will work just fine! I’m including a picture for you to see how it looks like. A true beauty! 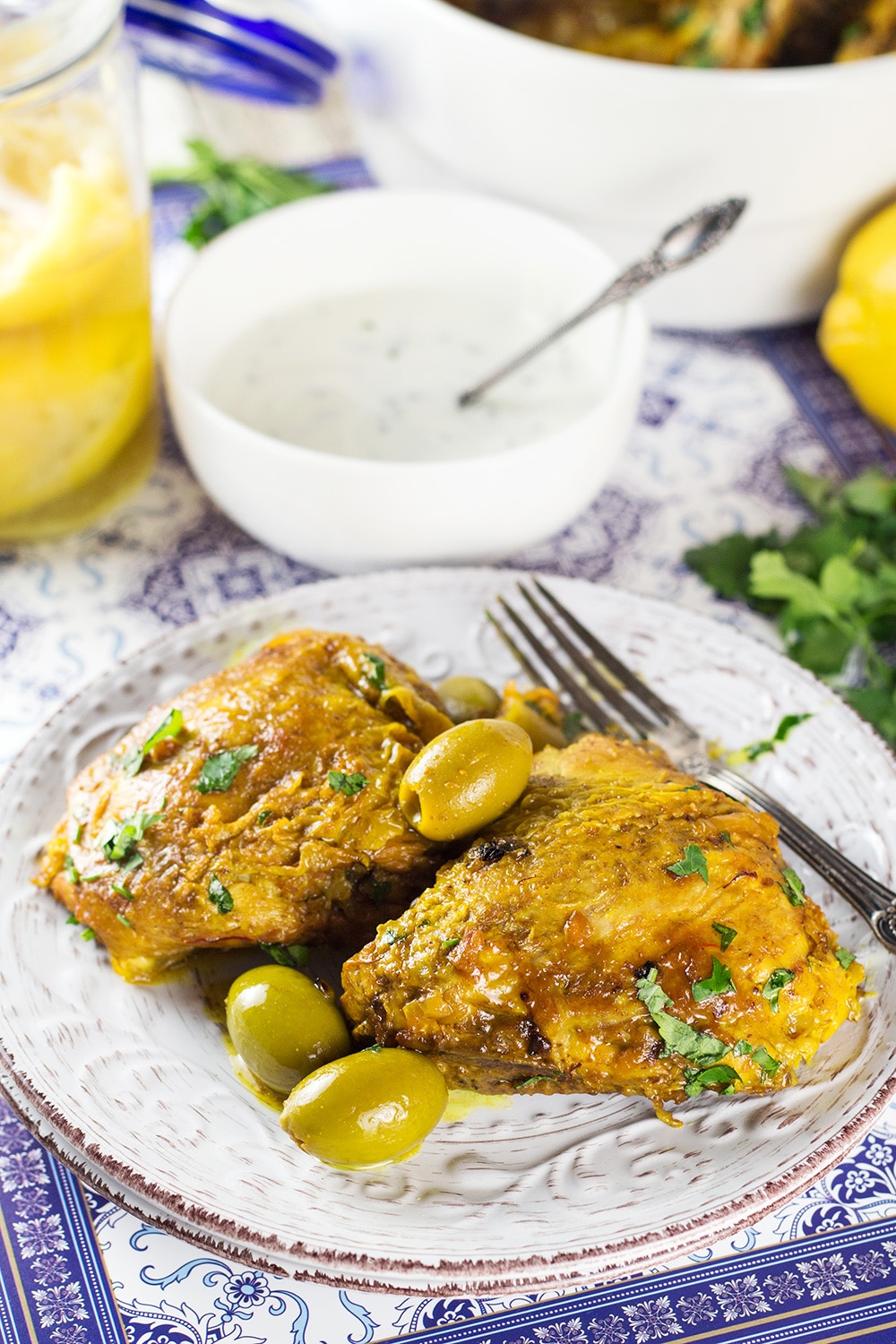 Moroccan cuisine offers a big variety of various tagines (that’s why it’s a good idea to get that pot sooner or later) but the one with chicken, preserved lemons, and olives I made today is perhaps the most popular. Maybe that’s because chicken meat is cheap and accessible (a significant number of tagines in Morocco are made with lamb) or maybe it’s a combination of flavors that makes it so beloved. 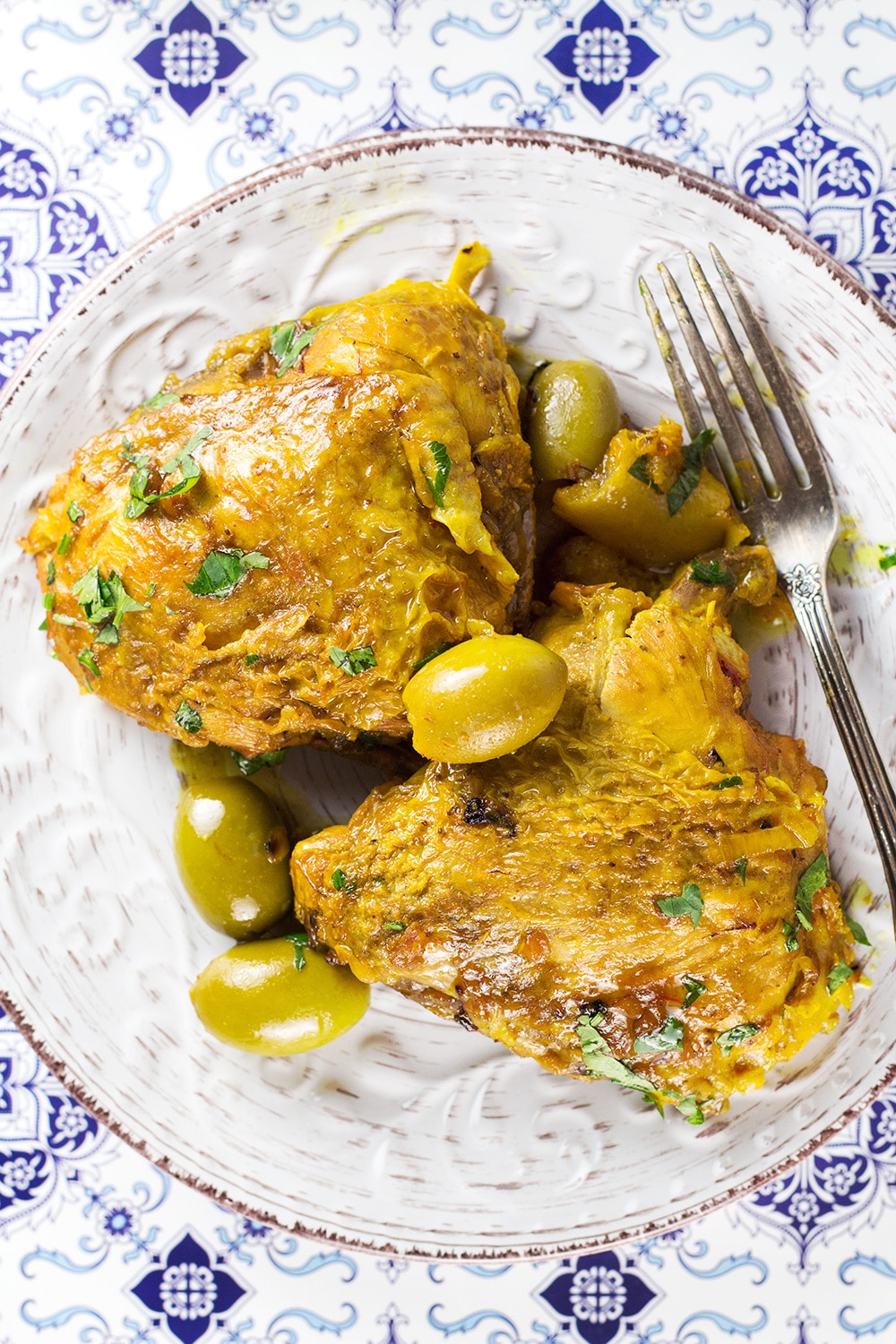 Traditionally, a whole chicken is used to make the Moroccan Chicken Tagine but in many modern recipes, even those made by the famous Moroccan chefs (for example, Mourad Lahlou from whose book New Moroccan I adapted this recipe) only chicken legs or thighs are used. I agree with this one because it’s less work + chicken breast can turn out dry and not so pleasant to eat.

This Moroccan stew looks good, isn’t it? Check out more awesome stews from other countries! 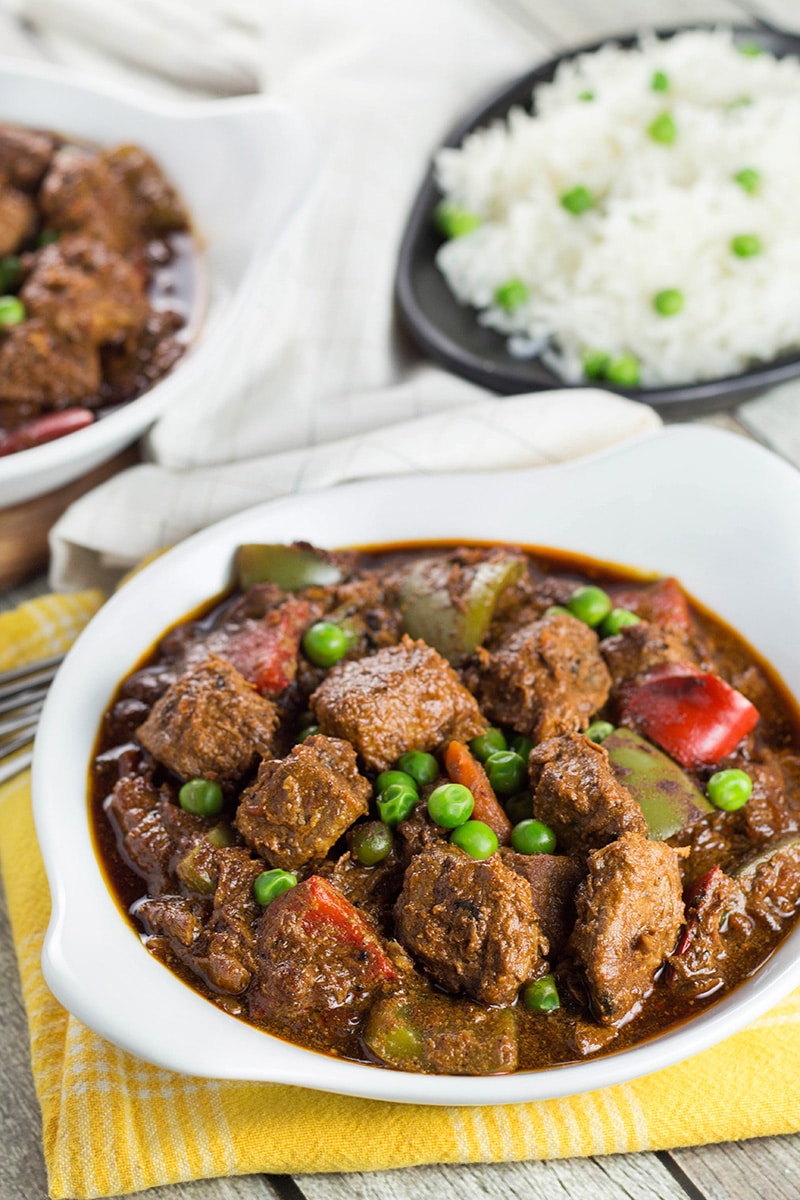 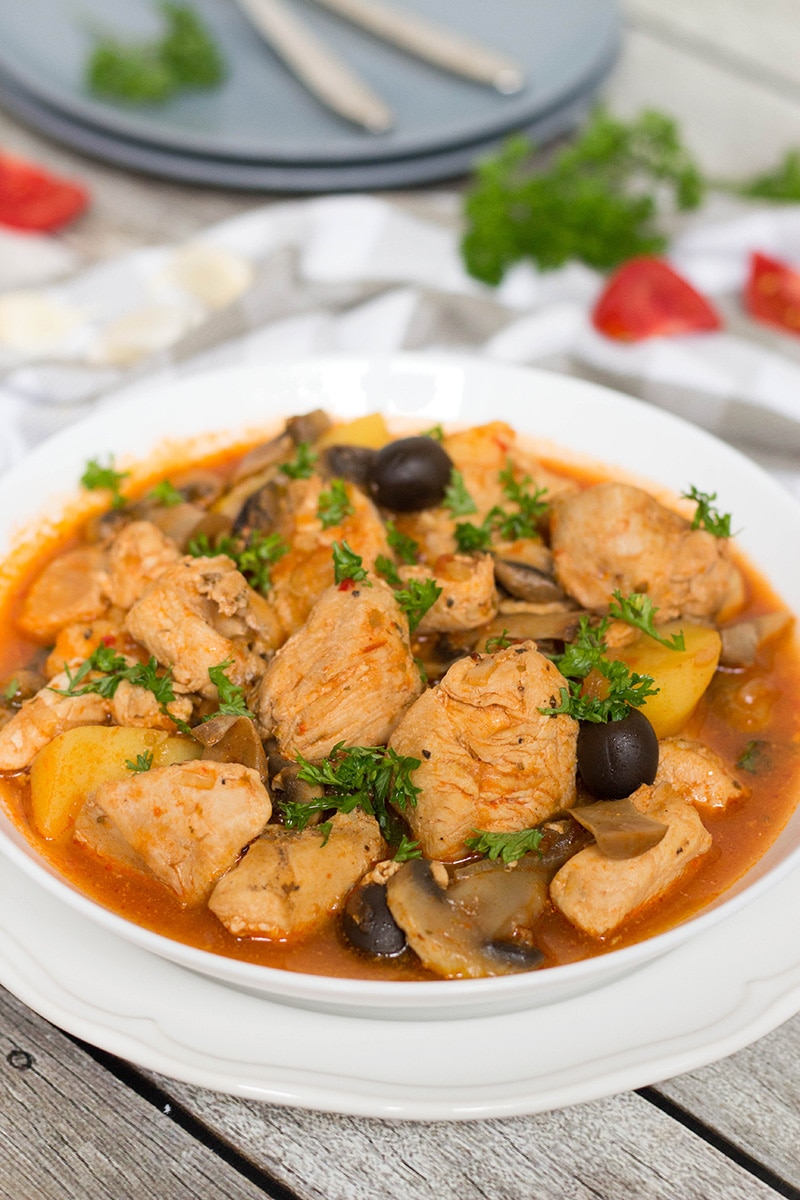 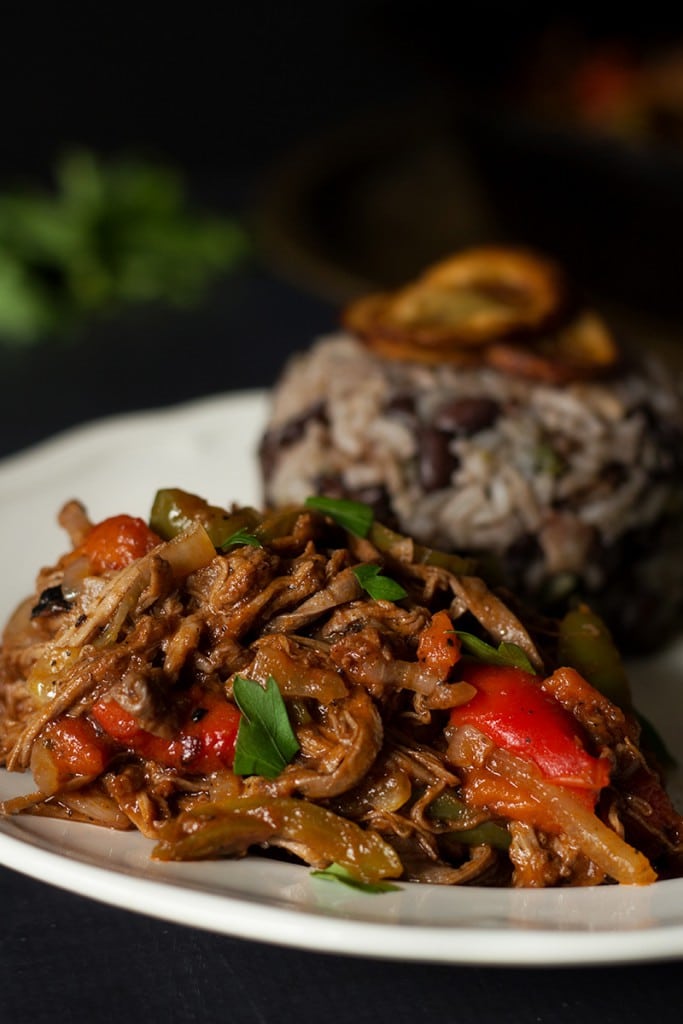 I had a great anticipation for this recipe and it didn’t disappoint. Or should I say that it even exceeded my highest expectations! Seriously, guys. Preserved lemons are the beast. I can’t believe that they gave so much flavor even though I added them only in the last stages of the recipe. Unbelievable. Buy them or make my homemade version but be sure to get them! They are worth everything. 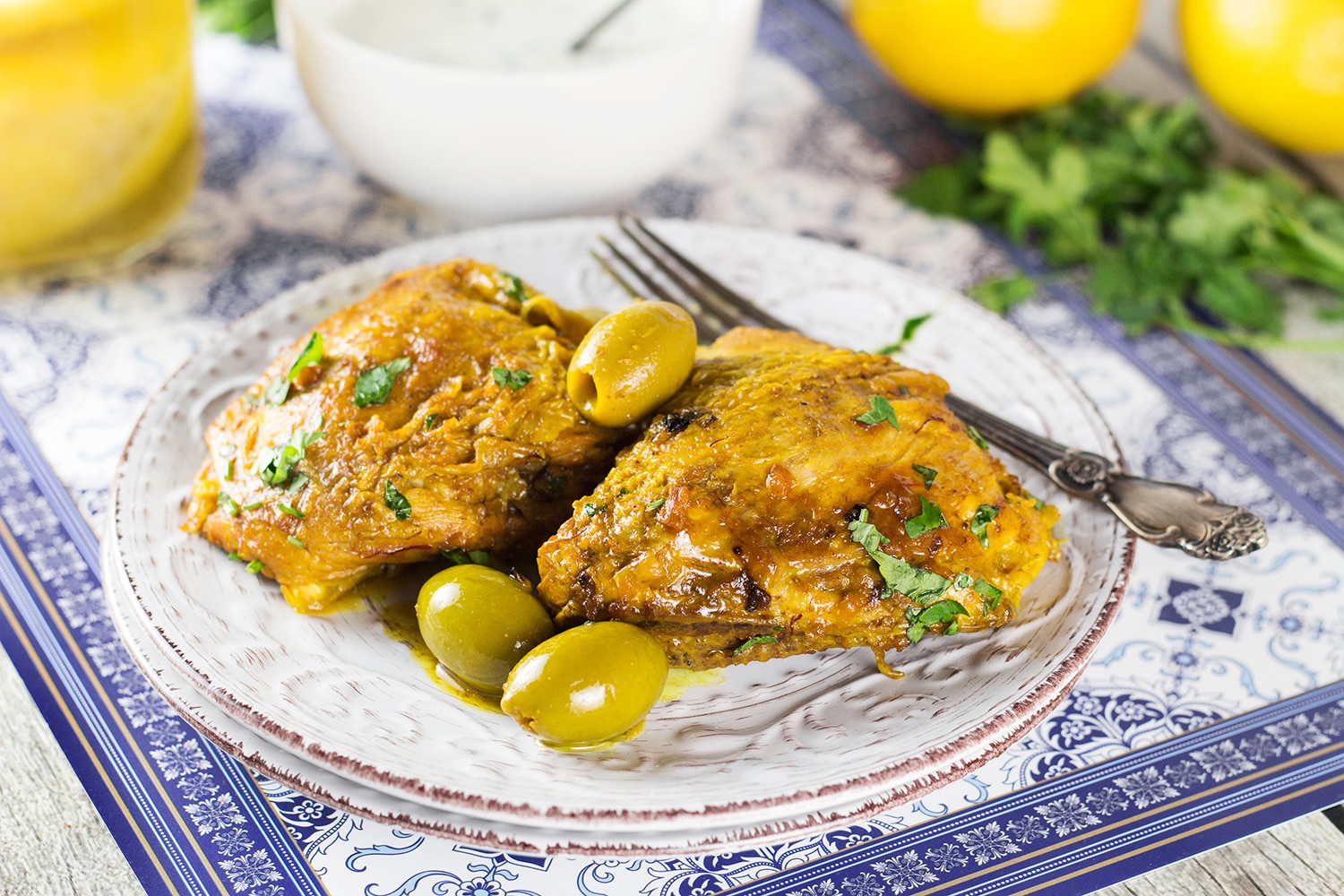 The sauce in which the chicken cooks is also packed with flavor. Coriander, white pepper, ginger, turmeric, even saffron! That’s an impressive combo. Oh, and the green olives are so on point here. All these things combined result in a juicy, lemon-y, finger-licking-good chicken. Hands down one of the best chicken stews I tried lately!