Mexican Sweet Bread has more than 300 different varieties but Conchas is most probably the most popular one. Soft inside and crunchy outside, these shell shaped buns with a shell pattern on the top are perfect with a cup of hot chocolate or coffee! 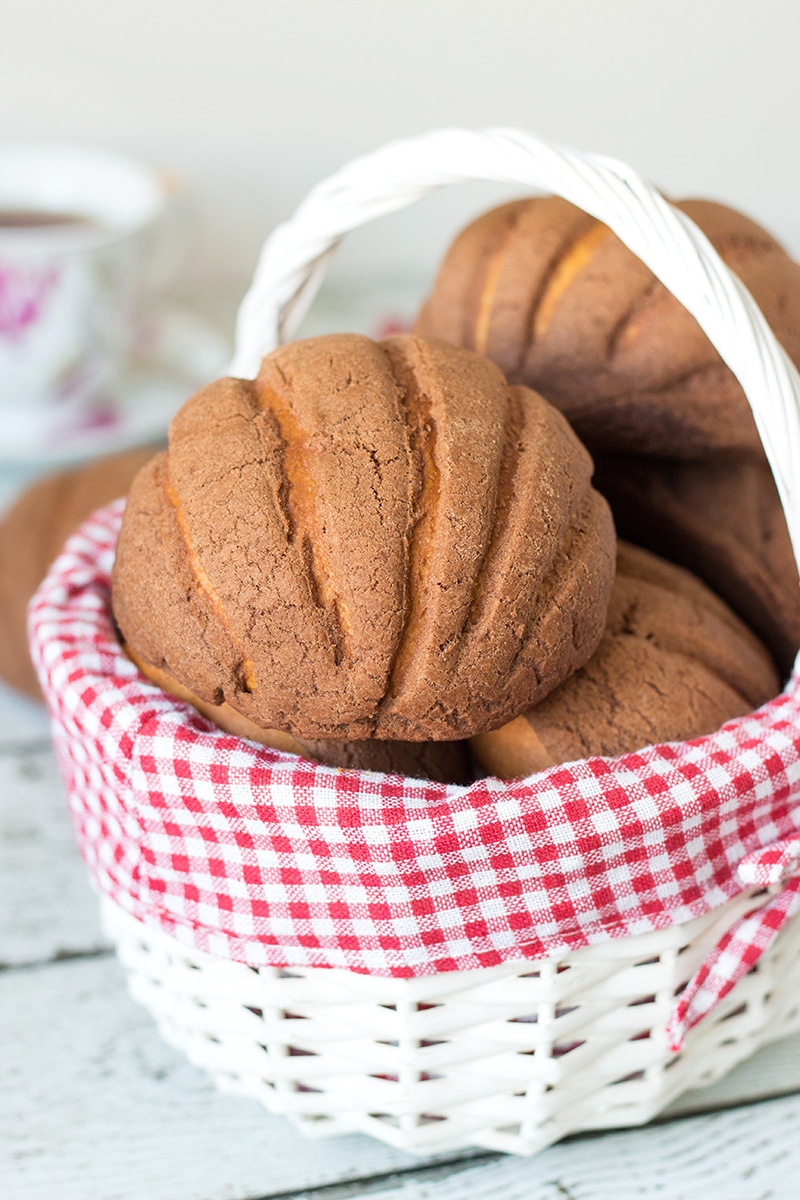 When I made the Mexican Rice Pudding few months ago, I talked that Mexican dessert world is seriously undervalued. Everyone talks about tacos, quesadillas and other popular stuff but no one pays attention to the sweet treats this sunny country has to offer. I won’t make such a mistake.

This time I want to introduce you a Mexican Sweet Bread, Pan Dulce in Spanish. It’s not just one type of bread, Pan Dulce has many different varieties. It’s more like a group of baked goods. I won’t talk about all of them here, because this topic deserves a separate post. It’s too many of them (according to different sources, between 300 and 1000!). If you are interested though, there is a great article on Wikipedia about Pan Dulce. Every type has a name usually associated with its look: ears, flowers, horns, to name a few. I chose one variety (a very popular, or I should say the most popular, one) called Conchas. It means shells in Spanish, and this Mexican sweet bread is called like that for their shell-like shape and shell pattern on the top. 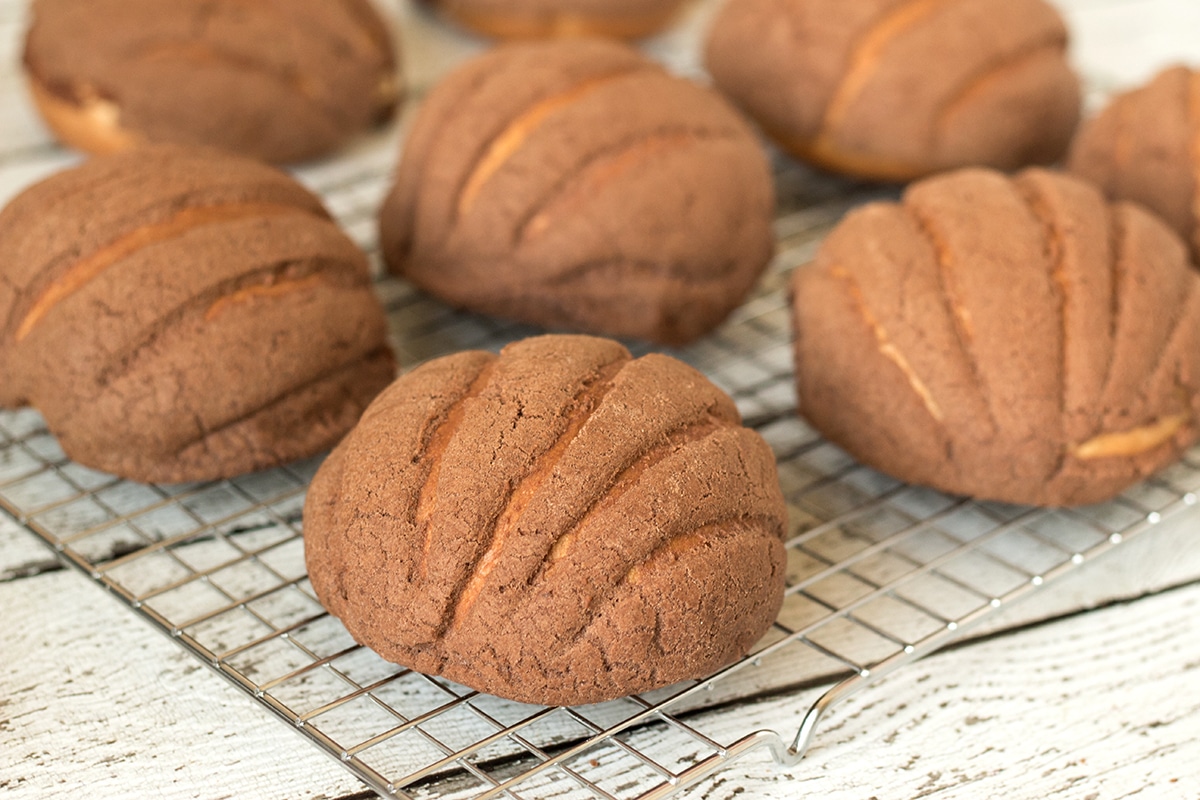 The appearance of the sweet breads in Mexico was heavily influenced by the French and Spaniards. They were the ones who introduced baked goods and various pastries to indigenous people and inspired them to create many different varieties of Pan Dulce. Thanks to them, Mexicans and people visiting this country can enjoy these sweet treats every day! These are not just words. Mexicans really munch their sweet bread every single day. Panaderías (bakeries) offer myriads of Mexican sweet bread varieties you can choose from. It became a breakfast or a late supper staple which is usually enjoyed with a cup of hot chocolate or coffee.

I can actually relate to this tradition, because sweet baked buns are highly popular in my country. There are loads of bakeries around my town and people buy them like crazy. I am one of them, ha! So, high five to Mexicans for their sweet bread! 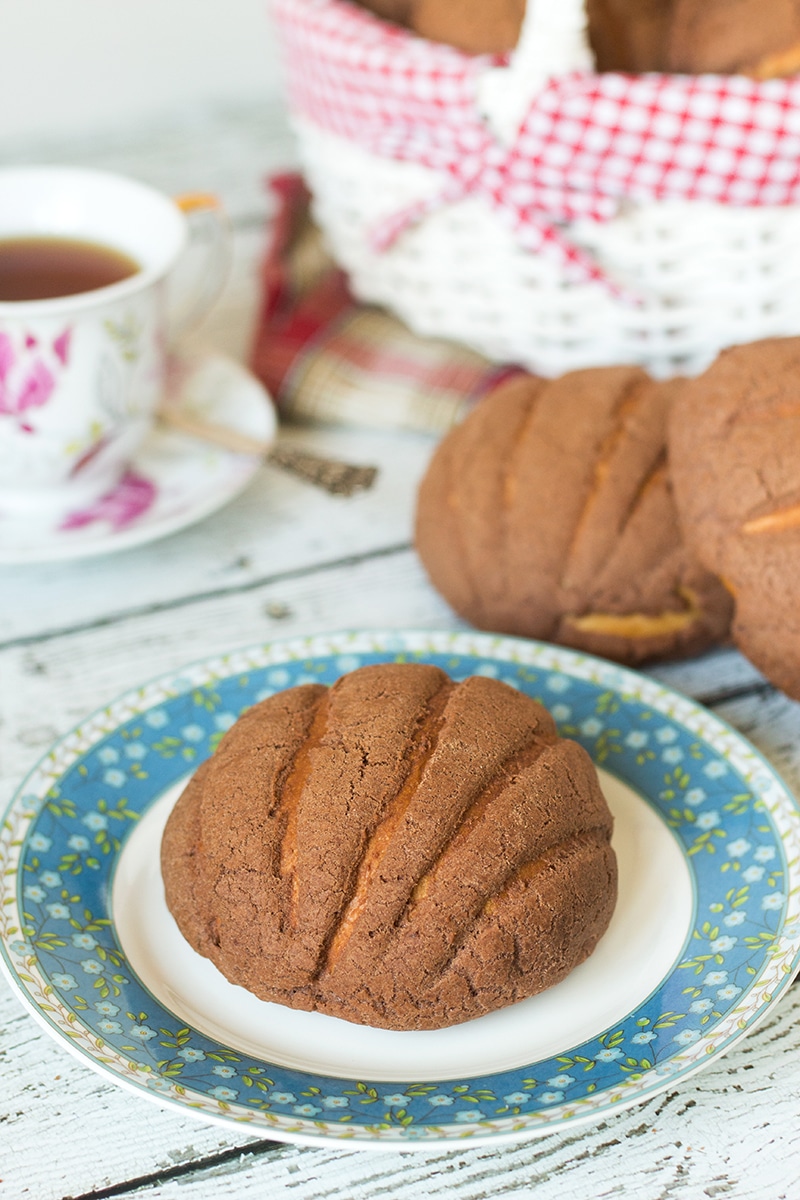 Now few words about the Conchas, the buns you see on the pictures. They are soft inside, while their shell-like topping is perfectly crunchy. The book I adapted this recipe from, My Sweet Mexico, offers two versions of toppings: a simple sugary one and a “chocolate” topping with addition of few tablespoons of cocoa powder. I am a huge fan of chocolate. If a cookie or a bun doesn’t have some chocolate inside or on top, it’s not good enough to me. I will still eat it, but I won’t be as happy as I would be with some chocolate inside. I guess the answer to the question which version of Conchas I chose to make is pretty obvious! 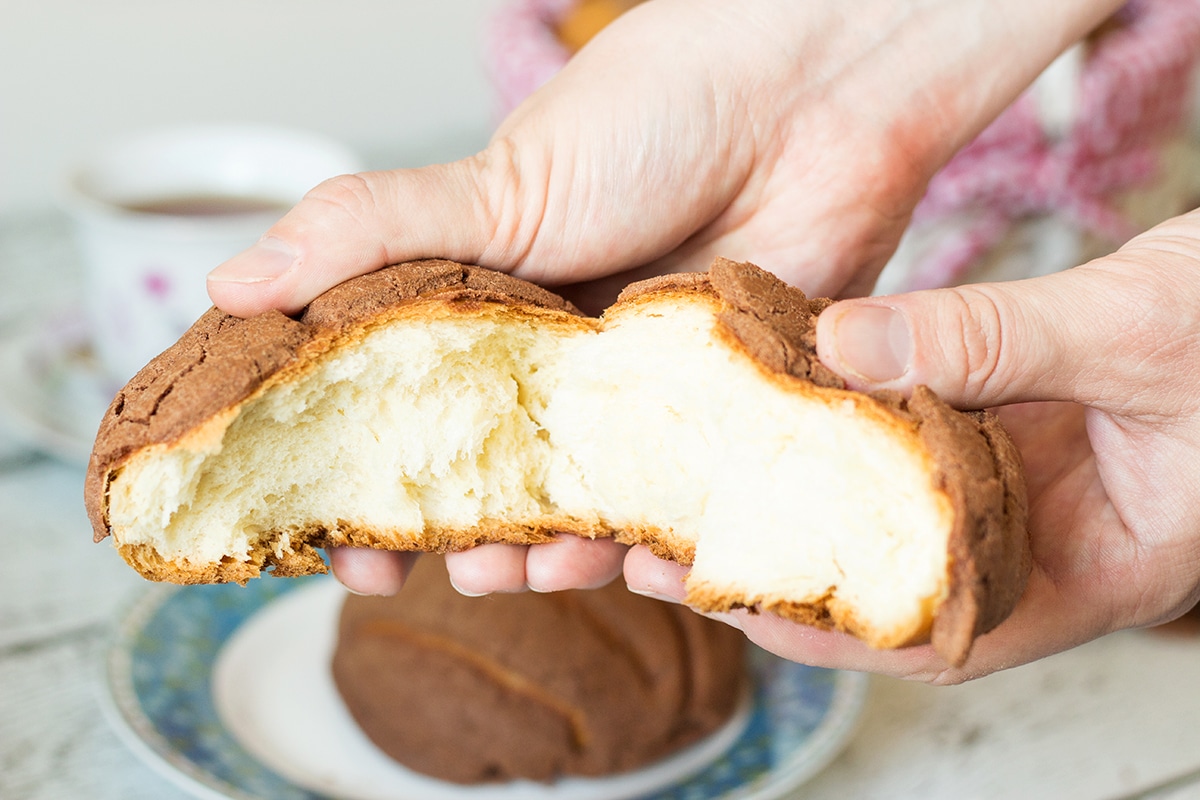 I really loved this Mexican sweet bread. First of all it looks amazing. I didn’t think that I will be able to make these shell-shaped buns by myself, but I was wrong. They turned out even better than I was thinking they would. Awesome! I also loved the combination of the soft, not too sweet interior and the crunchy, chocolatey topping. Perfect with a cup of tea or coffee. Enough words, just go and make them already!

There exist many Mexican Sweet Bread varieties but Conchas is the most popular one. These shell-shaped buns are soft inside and crunchy outside! They do require some effort but it's well worth it.
Print Pin Rate
Prep Time: 2 hours
Cook Time: 30 minutes
Total Time: 2 hours 30 minutes
Servings: 16 buns
Calories: 463kcal
Author: CookingTheGlobe