Breakfast Around the World, Sweden


After the last week’s trip to the sunny and hot Brazil, in this #2 edition of the “Breakfast Around the World” posts series we are heading North to the land of the Vikings, meatballs and Ikea – Sweden! Let’s see how the Swedish breakfast looks like! 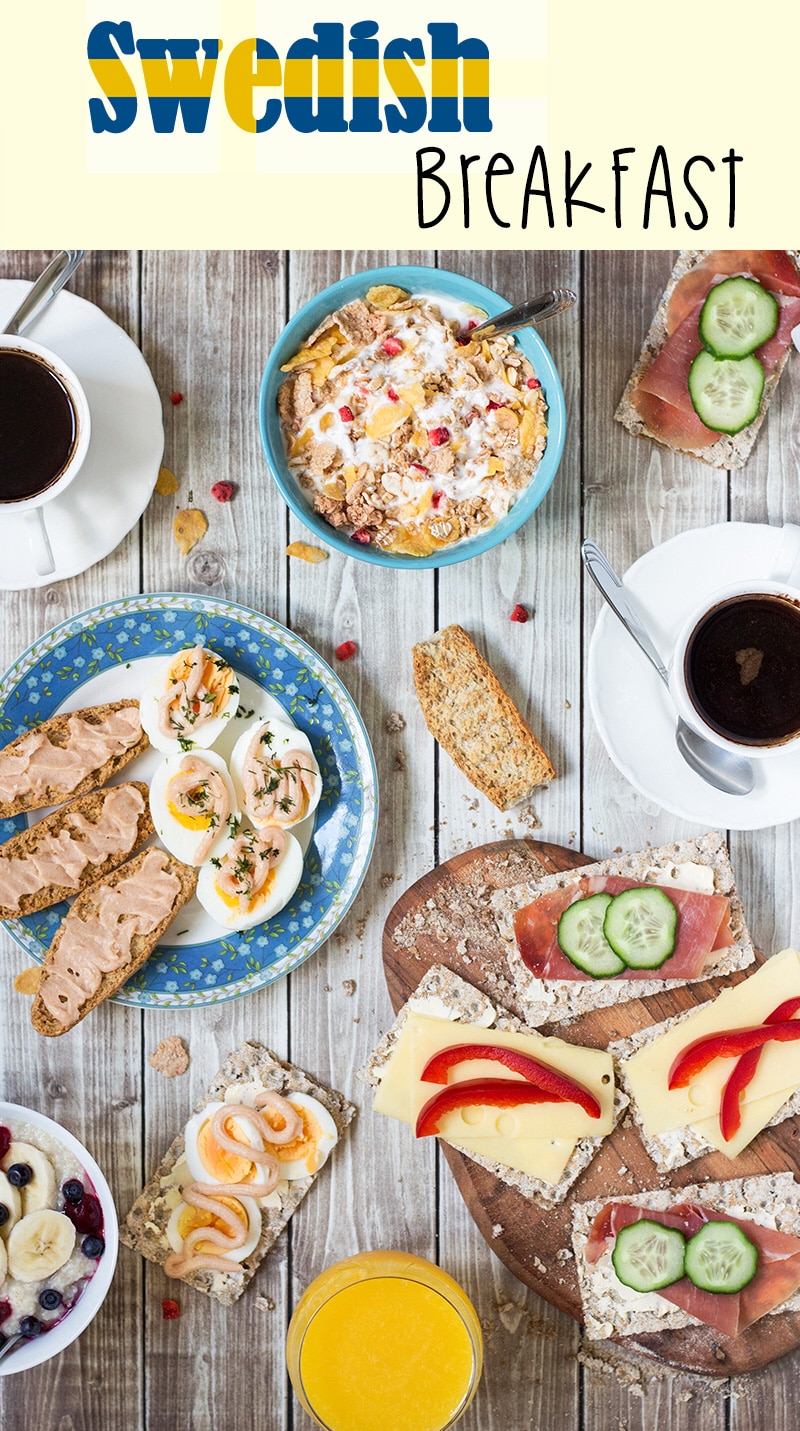 Let’s start from clearing up the myths. Despite the crazy popularity of the Swedish meatballs (hello, Ikea!) and Swedish pancakes around the world, they are not eaten for breakfast. The same can be said about another Swedish staple  – salmon. Neither salmon, nor other kinds of fish such as pickled herring are common for breakfast. I found the fact that such a beloved food in Sweden as salmon is left behind a little bit surprising. In my humble opinion it is a perfect sandwich topping, and actually, even I have it for breakfast sometimes, but hey, it’s their choice! If you are a Swede and you are reading this post right now, please clarify the situation with the salmon and Swedish breakfast in the comments section below. Thanks in advance!

So, now when we clarified what Swedes don’t eat in the morning, let’s talk about what is usually found on their breakfast table. It should be mentioned that Swedes eat their breakfast at home; going out for the first meal of the day is an unusual thing. Like in other European countries, open-faced sandwiches are a MUST. You can choose from different toppings that are put on top of either plain or crisp bread. One of the most authentic toppings is a fishy paste (cod roe spread also called “Kaviar”) from a tube! More about it below. Boiled eggs are also a frequent guest. Swedes also like such international breakfast staples as oatmeal porridge and cereal or muesli. 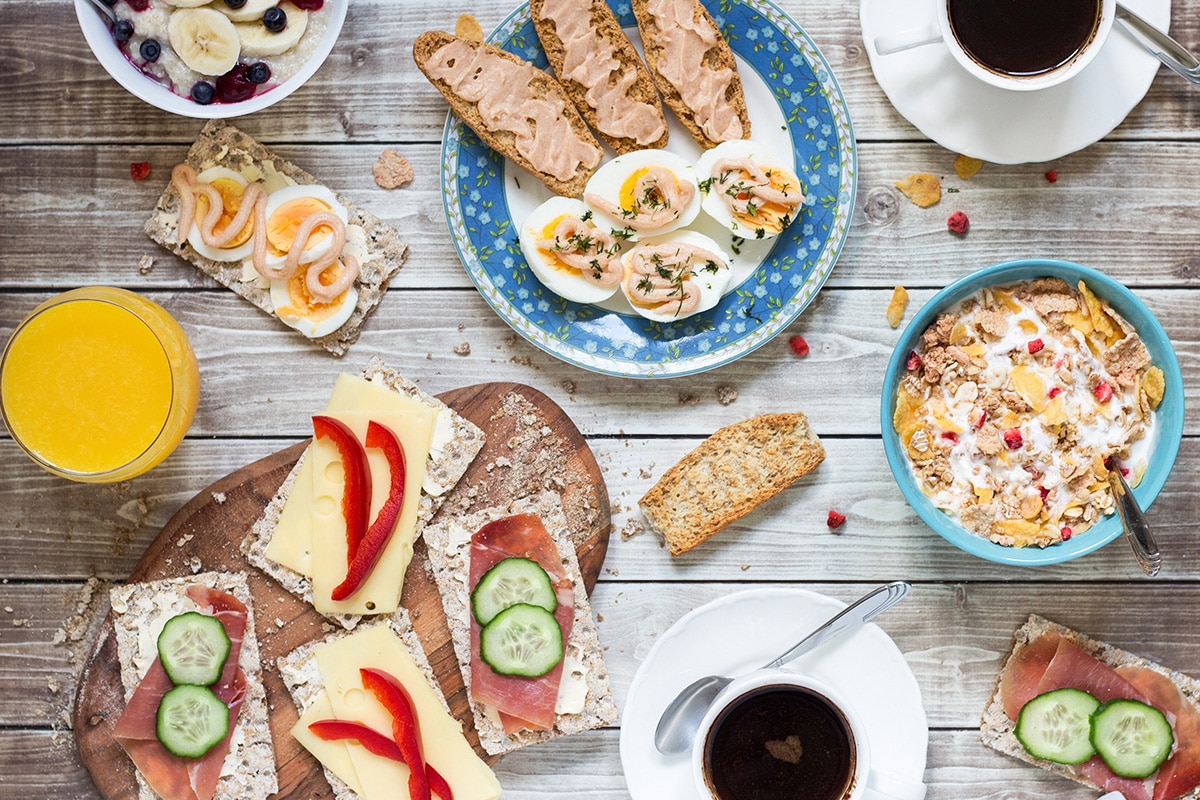 Now, let’s dive a little bit deeper into the details of the ordinary Swedish breakfast.

Swedes can’t imagine their breakfast without a cup of coffee. Strong coffee. In the last post about the Brazilian breakfast I told you that Brazil is the world’s largest producer of coffee, right? Well, Swedes are not known for producing coffee, but they drink a hell of a lot of it! Sweden is in the top 5 of the most coffee drinking countries in the world! If you are not a fan of this black drink, like me, pour yourself a cup of juice.

Breakfast sandwiches in Sweden are as plain as possible. Bread, butter or margarine, cheeses, cold cuts, and a simple veggie on top – cucumber, bell pepper or tomato. Nothing fancy. Well, there actually is one interesting sandwich topping option. 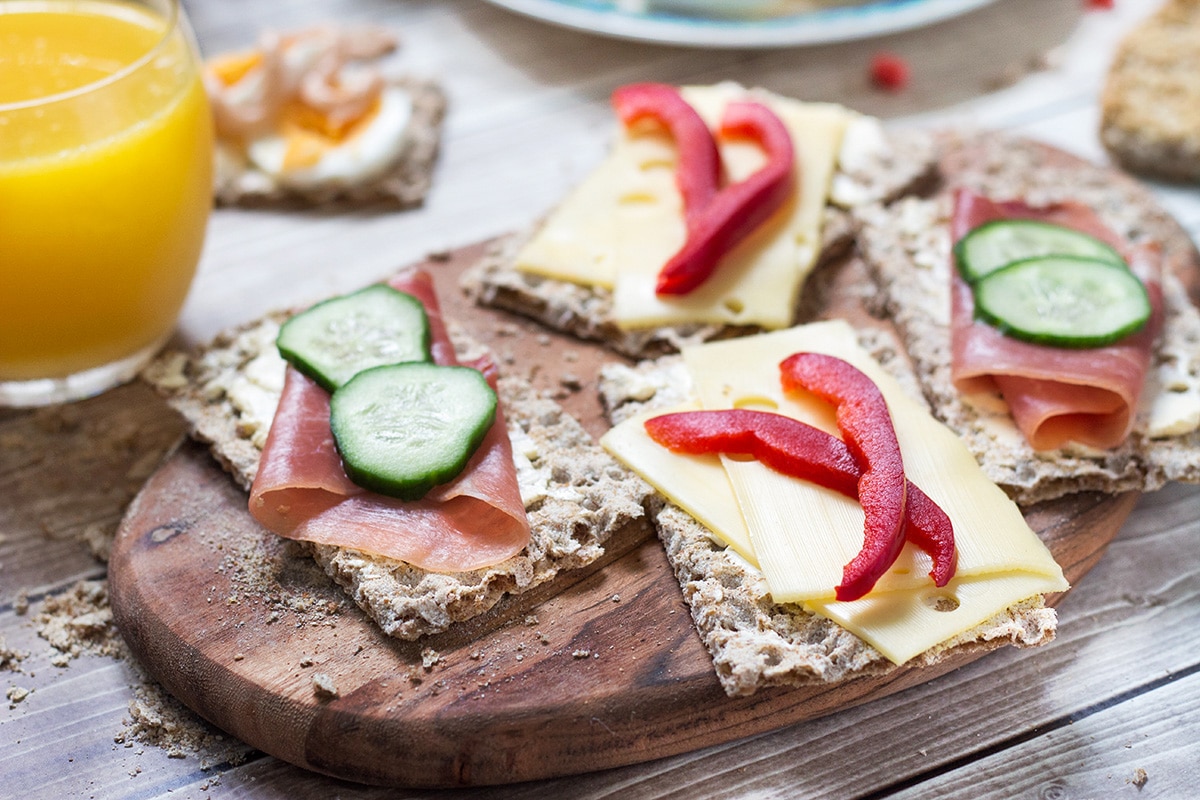 How about the roe spread (caviar) in the early morning? This fishy paste comes in tubes and Swedes are crazy about it. This Swedish specialty is not for the faint of heart and will most probably shock a foreigner’s palate. I was so happy that I was able to find it in my country! You can look for it in your local Ikea, there is a 99% chance they will have it! The roe spread didn’t make my palate feel bad at all, except the fact that you probably get a week worth of salt intake in one serving, ha ha! I guess I quite loved it because these types of products are common in Eastern European countries (not for the breakfast though). But anyway, you have to taste it at least once in a lifetime!

Some time ago the most famous cod roe paste producer “Kalles” ran the advertising campaign, during which this fishy Swedish paste was served to people in the streets of Los Angeles, New York, Tokyo and other places. You can read about and watch their reactions in this New York Times article. Hilarious!

Swedish sandwiches can be made either with a plain or a crisp bread (knäckebröd). It’s a cracker like bread made from rye flour. It’s super light and can last for months. Crisp bread was for a long time considered a poor man’s food, however, lately it gained popularity in Nordic countries. I found it easily in my local supermarket, so you can try looking for it in your local shops or (once again) visit the mighty Ikea and you will find everything! I love the concept of Ikea. On one hand, it’s a furniture shop, while on the other hand, it gives you a chance to familiarize with the country’s culture. Pretty cool. 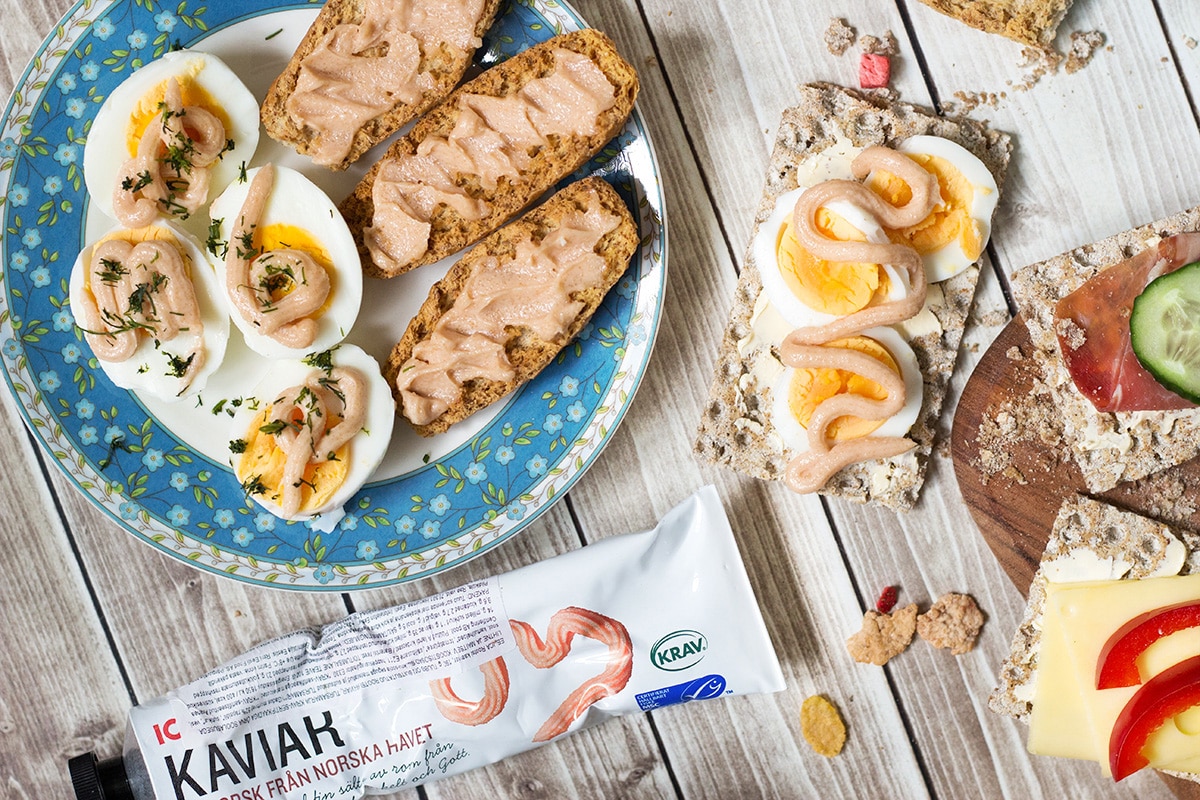 This Swedish breakfast option is very familiar to me, because we have boiled eggs quite often in the morning in Eastern Europe. The only difference is the topping. We put some mayo on top, while Swedes squeeze some roe spread from a tube on eggs. Actually it’s even more common to put caviar on eggs, rather than simply on bread. I can prove the fact that Swedish fishy paste goes the best with boiled eggs. You can eat boiled eggs cut in half or sliced up on top of bread or crisp bread. Just don’t forget that caviar! 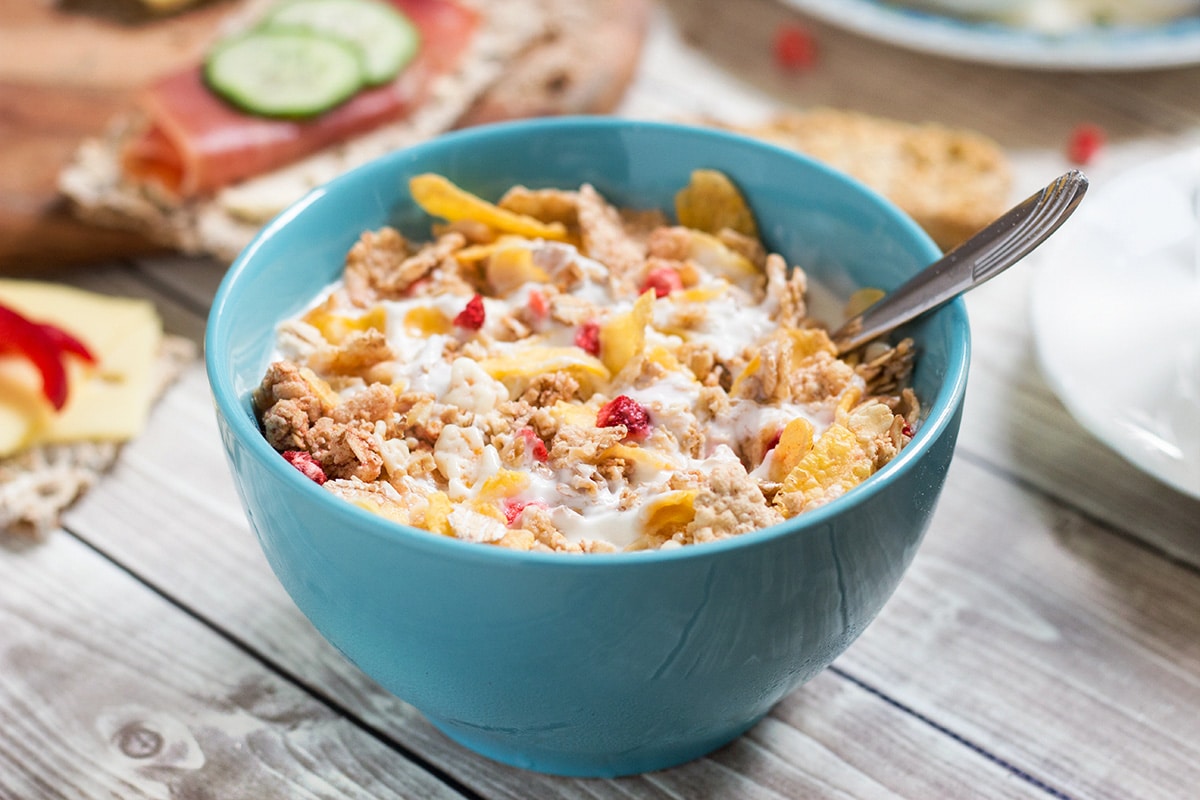 Lastly, more simple and well known Swedish breakfast options. Swedes eat their cereal or muesli mixed with yogurt or a local specialty filmjölk (milk product similar to buttermilk or kefir). Filmjölk is very popular among Swedes, unfortunately I wasn’t able to find it and made my muesli with plain yogurt. Talking about the porridge, it’s just the same as everywhere, made with oatmeal and topped with fruits and berries. 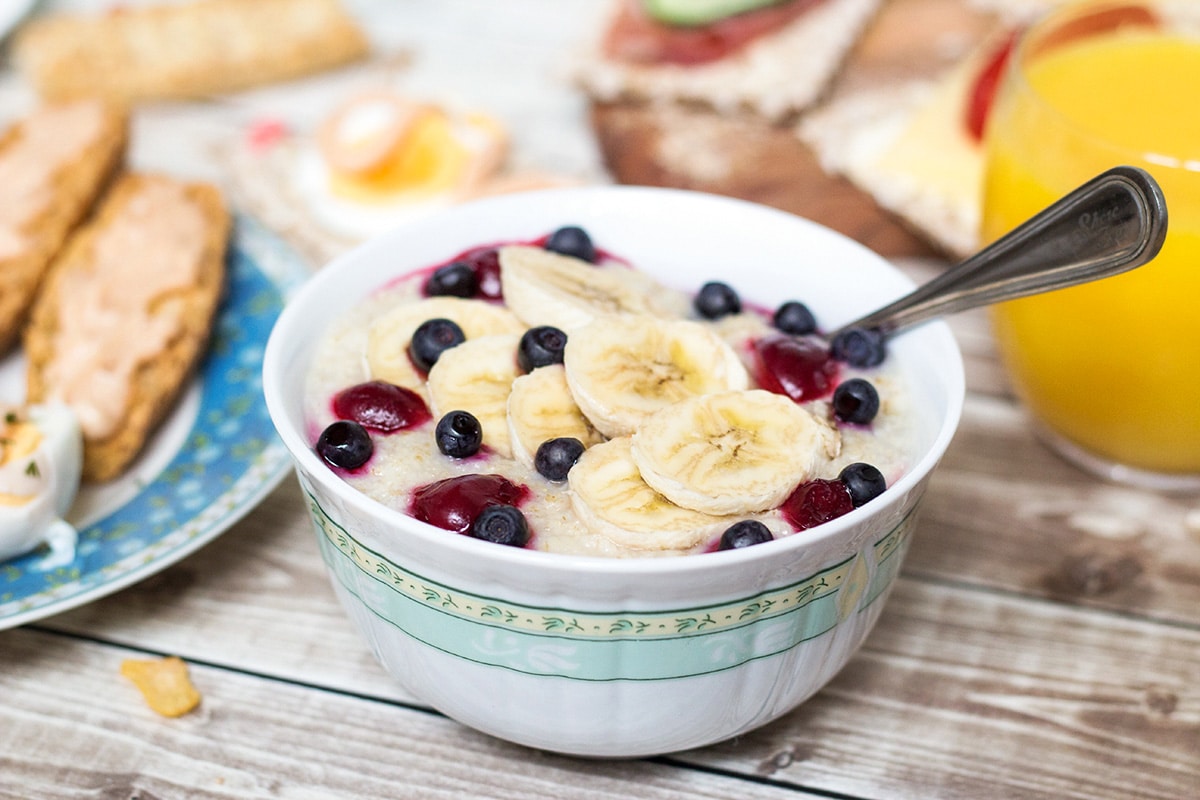 That’s it! I really enjoyed this filling Swedish breakfast. Even their fishy paste! I have almost a full tube of it left, so I guess I have no other choice, ha! Have you noticed that there were no dessert at all? That’s right. Swedes don’t have any pastries for the breakfast. Just yogurt, muesli, some berries and fruits on top. Sometimes they do add some jam to a cereal bowl though.

If there is the IKEA in your town, or a nearby town, you can easily replicate this Swedish breakfast. Maybe you even don’t need the IKEA and you will be able to find all the ingredients in your local or specialty shops. Believe me, it’s worth it. See you in other “Breakfast Around the World” posts!

This Scandinavian breakfast offers open-faced sandwiches made with crisp bread, a selection of cold cuts and cheeses, eggs, muesli, and even a cod roe spread!
5 from 2 votes
Print Pin Rate
Author: CookingTheGlobe

English Breakfast – Breakfast Around the World #9