Nobody would argue that Greeks know something about pies. Spanakopita, or a Greek Spinach Pie, is one of their most famous creations. Flaky and crispy phyllo dough layers and a creamy spinach & feta filling. Can it be any better?

Lately I am in love with Greek cuisine. I think it didn’t come as a surprise considering that it’s my third Greek recipe this month! My love affair with the cuisine of this sunny beautiful country started with this bright lemon rice soup called Avgolemono and continued with these fantastic looking Kataifi nut & honey pastry rolls. Now it was time to try one of the famous Greek pies. They have literally hundreds of them and there is one thing all of them have in common – phyllo or filo dough. 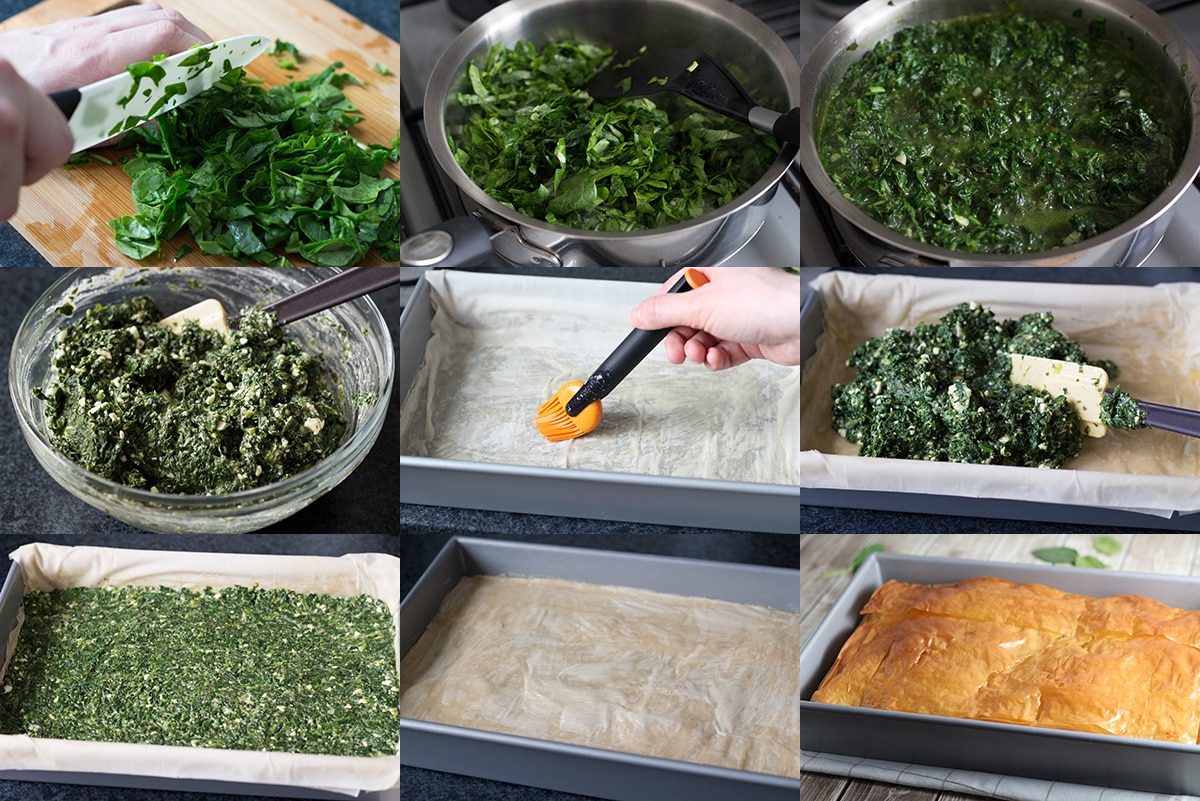 After combing through my countless recipe books I’ve finally chosen the one I would really love to make – savory Greek Spinach Pie called Spanakopita. I’ve found it in one of my favorite books – Mediterranean Cookbook. If you are into Mediterranean cuisine, I highly recommend this one. It’s colorful, with great pictures and foolproof recipes. By the way, all Greek pie names end with “pita”, which means “pie”: Tiropita, Kreatopita, Galatopita and so forth. Spanakopita is not only filled with spinach but also feta cheese and other greens. Feta is one of my favorite cheeses because of the distinct taste. Cover my eyes with a black cloth, wake me up in the middle of the night and I will still recognize it among hundreds. Seriously! 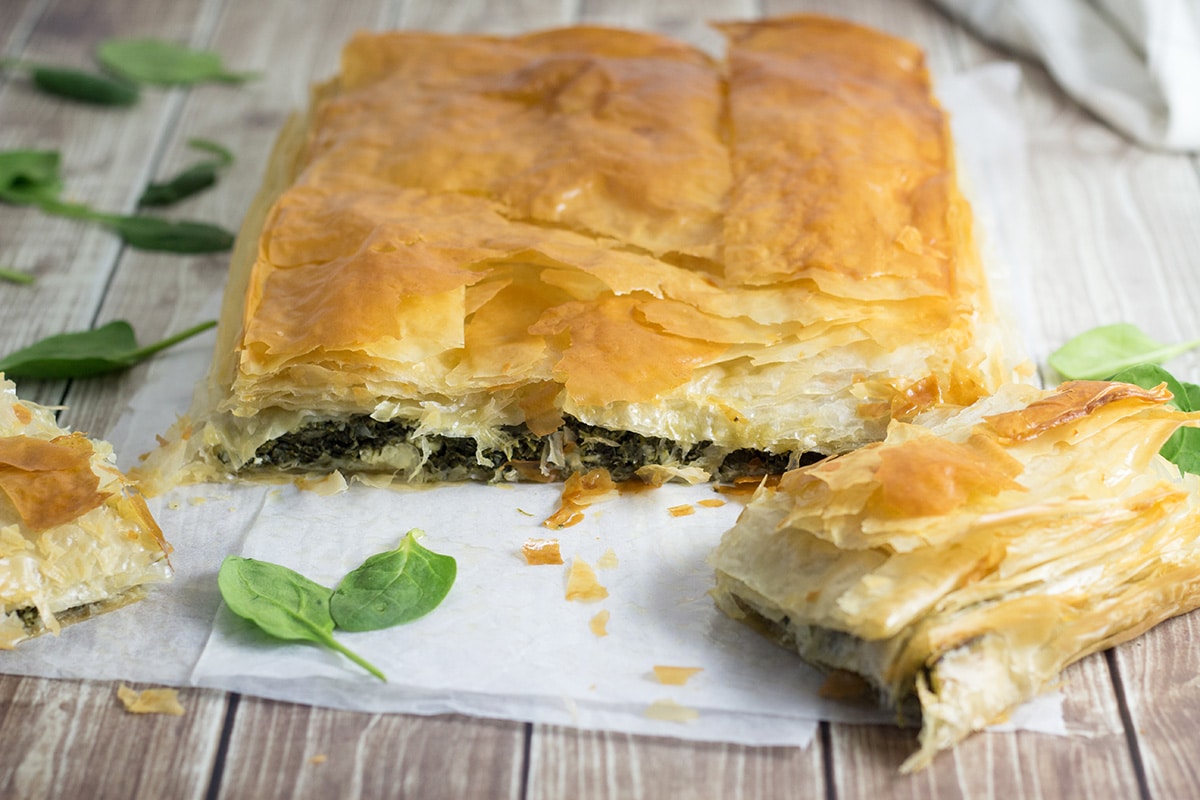 As I have already mentioned, this spinach pie, as well as other Greek pies, is made with phyllo dough. If you are not familiar with it, it’s a thin unleavened dough popular in Middle Eastern and Balkan cuisines. It’s quite popular, though, you have to be able to find it in your local supermarkets or specialized stores. Don’t get intimidated by the exotic name, it’s not difficult to work with. You just have to remember few things. First of all, thaw the frozen dough in the fridge overnight, bringing it to room temperature 30 minutes before using. Also, keep a damp towel over the dough when working with it to prevent it from drying out. That’s it! Now you are ready to conquer this fancy dough! 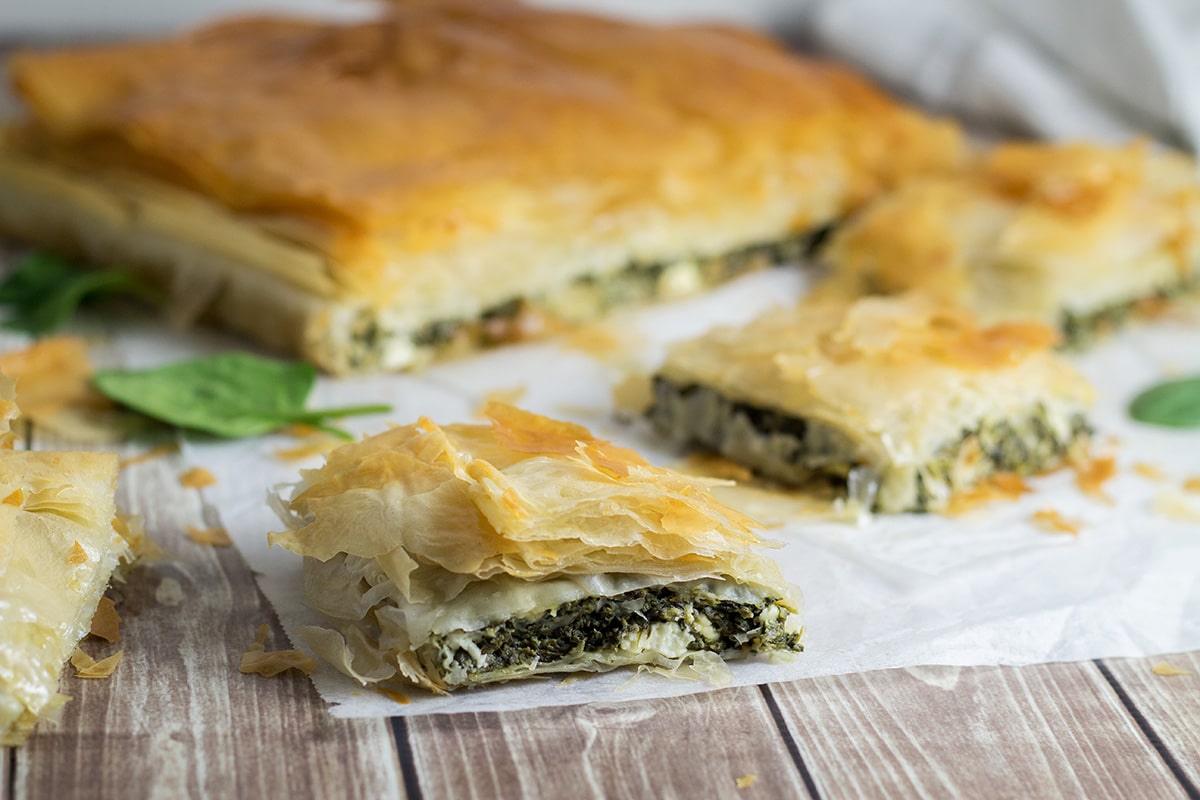 This delicious Greek Spinach Pie can be served as an appetizer or even a light lunch. It is surprisingly filling, keeping in mind the lack of meat (vegetarians, you will love this). The end result is the delightful pie with the flaky and crispy phyllo layers and a creamy spinach and feta filling. What’s not to love about it? Greek cuisine once again gets an A-plus from me. Impressive!

How To Make The Best Falafel