Sauerbraten, also known as German pot roast, is a signature dish of this European country. The fork-tender beef, drowned in a velvety sweet & sour gravy, is usually served on special occasions such as Christmas but can be enjoyed anytime you want. 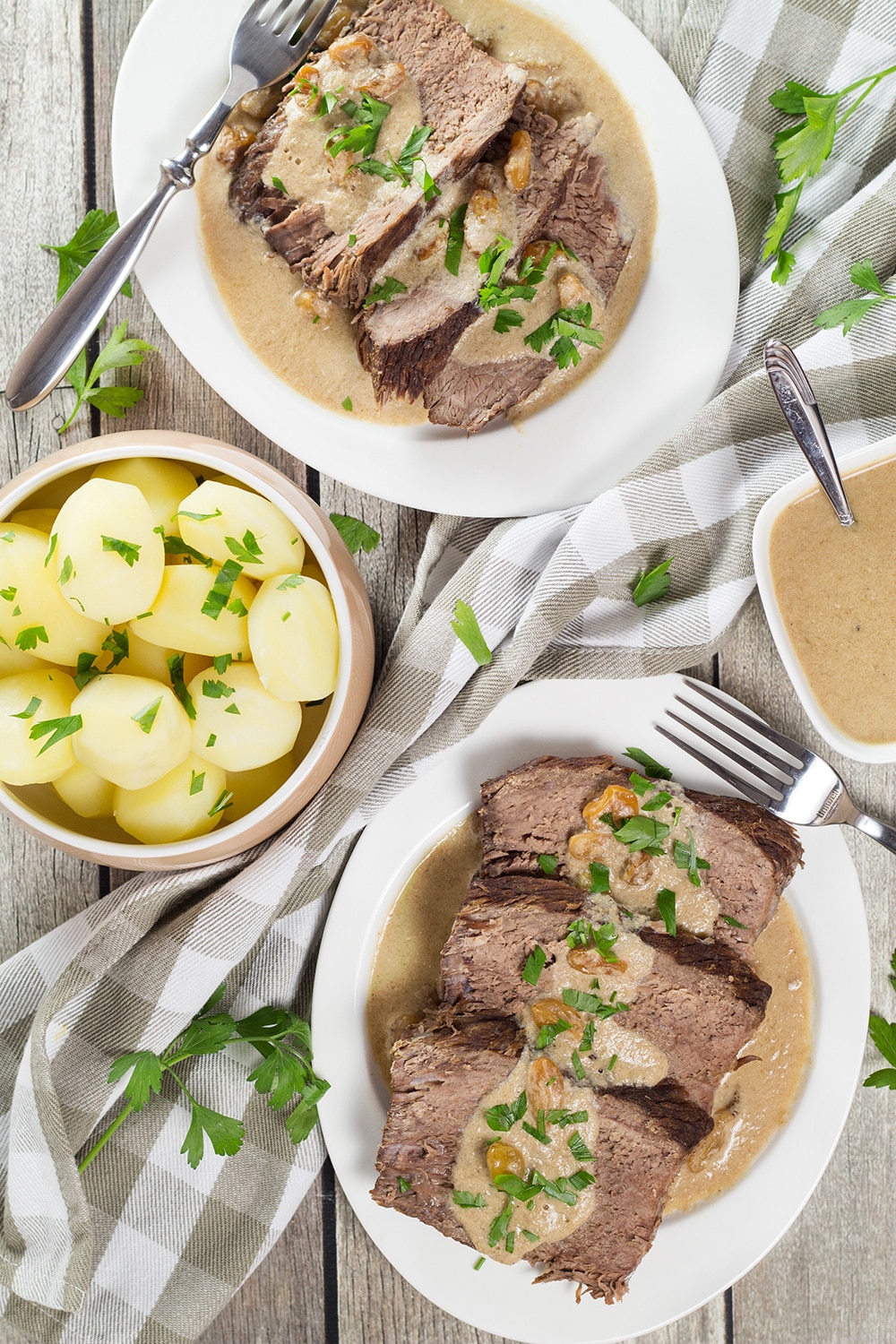 Despite the fact that Christmas is still far away, malls, shops, TV commercials, and other media channels have already started their campaigns and you can feel the holiday spirit in the air. Also, Black Friday is next week so people will be flooding the stores in search of the perfect presents for their beloved ones. I am not a fan of the early holiday buzz, though. I am one of those who is getting the gifts when holidays draw closer. Really really close. Like the next day close, ha ha! And then I am getting nervous when things I wanted are out of stock. Like the great Arnold Schwarzenegger in the movie “Jingle all the way“, where he is desperately fighting over the last Turbo-Man figure left in town. 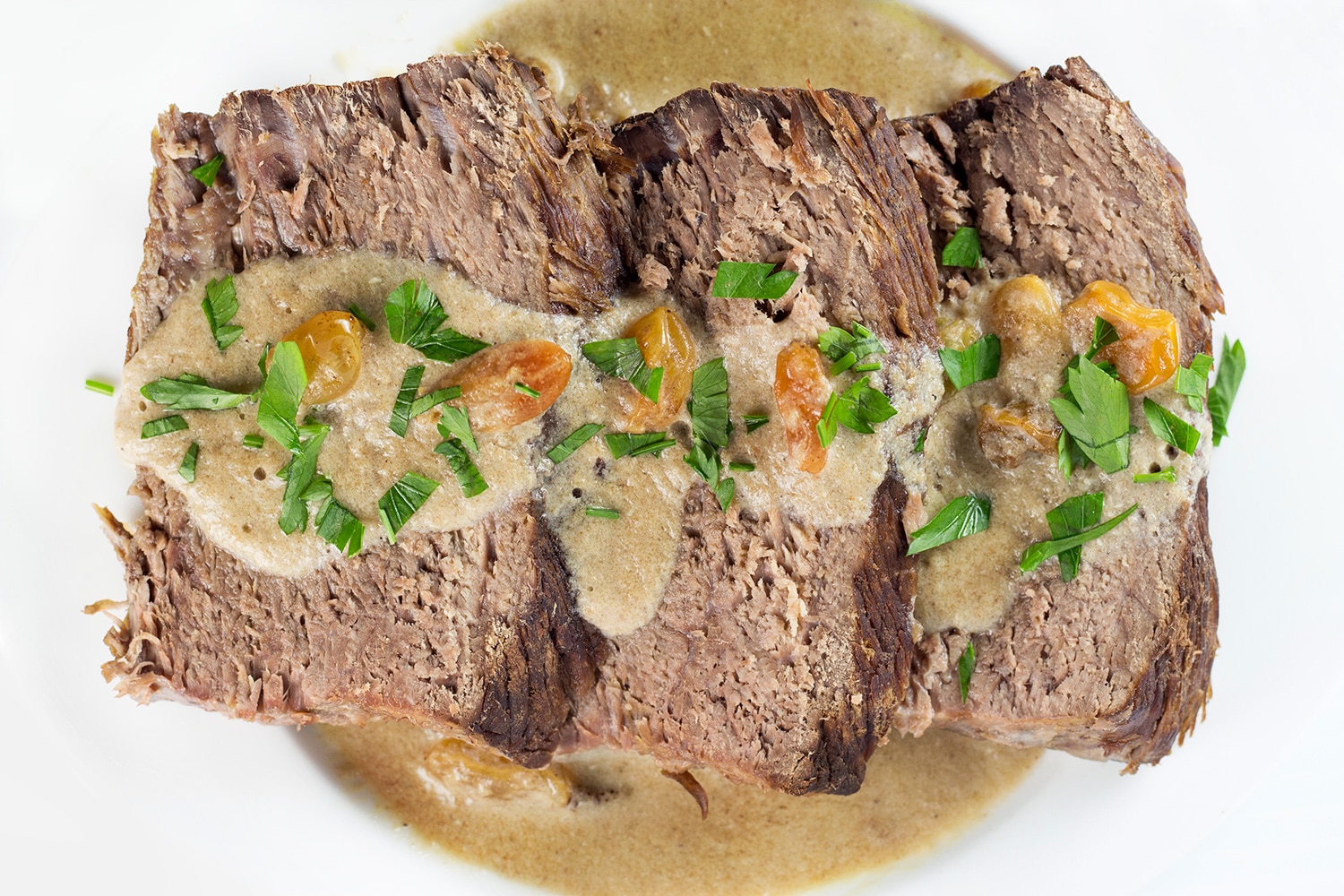 This attitude of mine doesn’t apply to the kitchen routine. I plan my Christmas meals way in advance. If you want to try something new, you have to make it a few times before the actual day to avoid any misunderstandings. This year, for the Christmas dinner, I decided to prepare German Pot Roast, called Sauerbraten (yes yes, sounds similar to Sauerkraut). Sauer means “sour” or “pickled” in German and Braten translates as “roast meat”. Traditionally, beef is marinated for several days in spiced vinegar or wine or a mixture of two before cooking it to make the meat more tender and flavorful. It is then served with a sweet & sour gravy made by using the cooking juices. 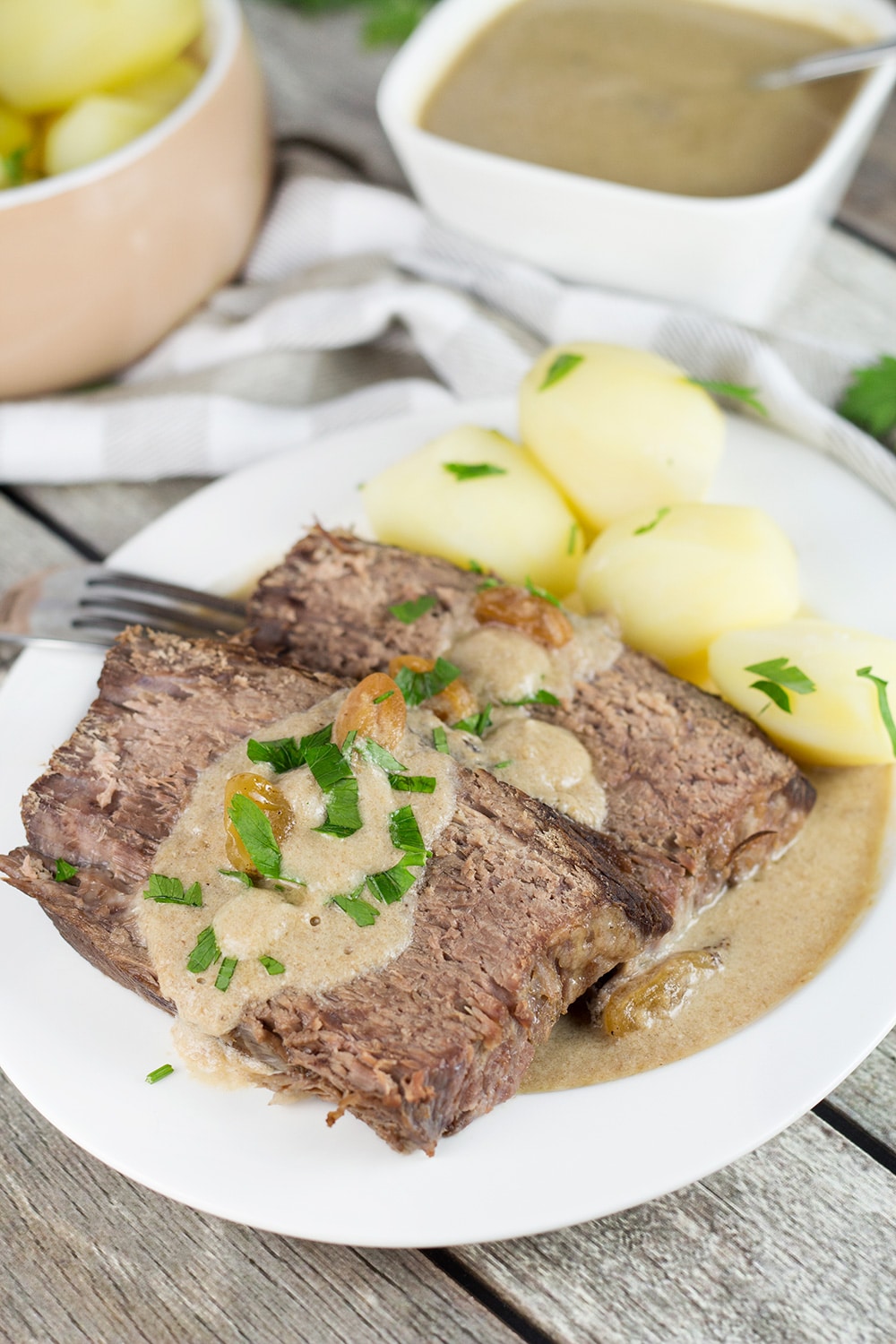 It wasn’t me who came up with an idea to serve Sauerbraten for Christmas. It’s a long-lasting tradition in Germany and you can find this pot roast on every single Christmas table, together with such staples as Glühwein, Lebkuchen, and others. What you won’t find is two recipes that are alike! 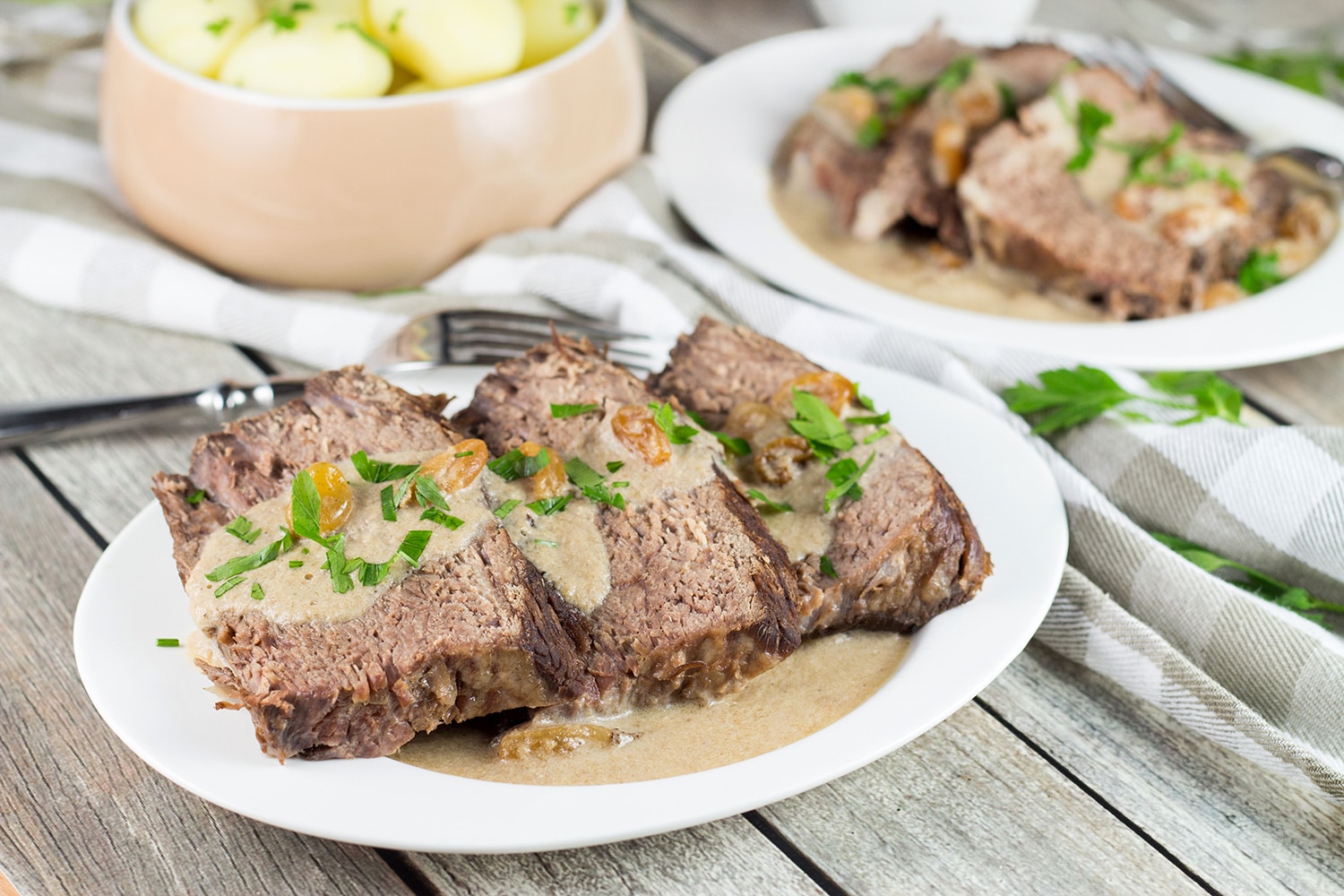 Every province, or should I say every cook, has their own version of this famous dish. The most differences can be found in the gravy. Many add raisins while others skip it, some throw crumbled gingerbread or gingersnaps into the mix, others not, sour cream may be used or left out, and so forth. I am pretty sure, though, that all the recipes result in a juicy, flavorful piece of meat! 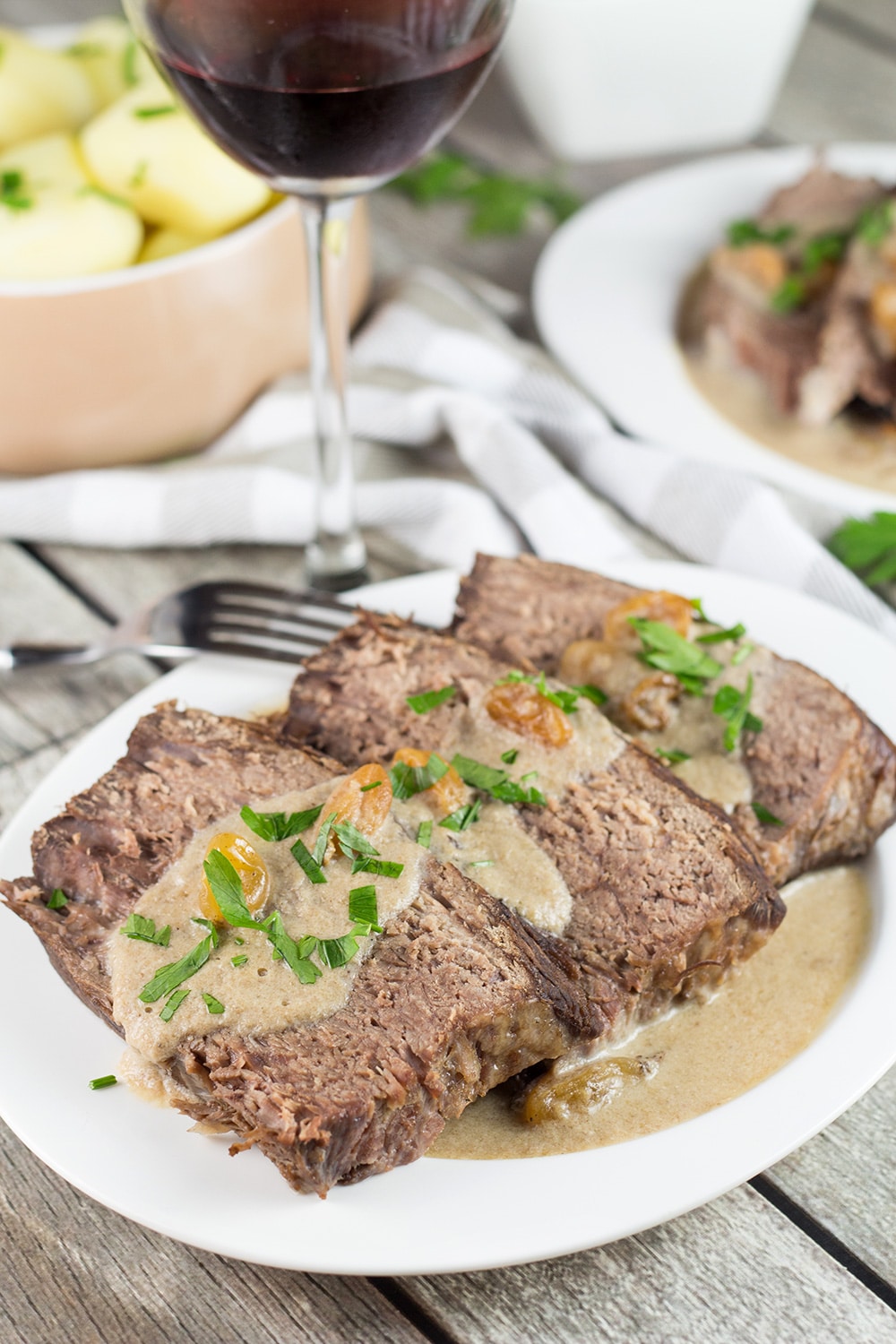 48 hours of marinating, about 4 hours of cooking, and it was sooooo worth it. I’m telling you, guys. The beef gets so tender you don’t even need a knife to cut it.  Oh and the gravy… It’s magical. Cooking liquid + sour cream + gingerbread + raisins = One of the best gravies I have ever tasted in my whole life. I can’t wait until Christmas when I’ll make Sauerbraten again. Serve the meat with boiled potatoes or German potato dumplings. Enjoy!

Sauerbraten can also be cooked on a stovetop. The same instructions apply, except covering the meat with parchment paper before cooking. No need to do that. Adapted from All About Braising by Molly Stevens