Traditional German Potato Dumplings or balls, also known as Kartoffelkloesse, made two ways: with cooked potatoes and with a mixture of cooked and raw potatoes. A perfect side dish to meat dishes also great as a standalone vegetarian dish! 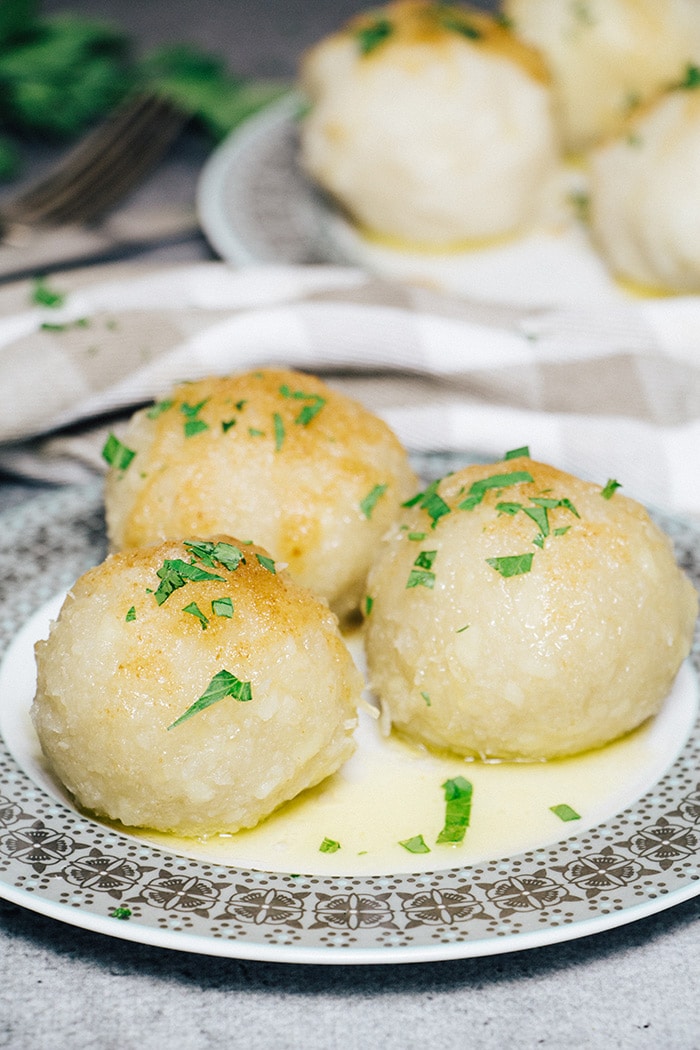 I have always enjoyed any type of dumpling I have ever had the pleasure of tasting. It’s simply amazing how many different types of dumplings are out there!

Dumplings have been around for a very long time and were originally used to help families stretch a meal. It was a tasty inexpensive filler, to easily add to a meal.

Nowadays, however, their status, as with many other peasant dishes, has changed and they are enjoyed everywhere around the world even by gourmets.

So what is a dumpling? A dumb question,  you will say. Well, until a few years ago I thought that it’s a cooked ball of dough based from flour with meat, fish, veggies or sweets inside which is boiled, steamed, simmered, fried or baked.

However, to my surprise, when I created this blog and started exploring various cuisines, I found out that dumplings are also made of potato or even bread dough! Well, you live you learn.

Since then I already tried sweet plum dumplings and savory dumplings called Shlishkes both from Hungary and both made from mashed potatoes. They were epic!

That’s why today I’m once again diving into the world of potato dumplings. This time we are going to Germany! 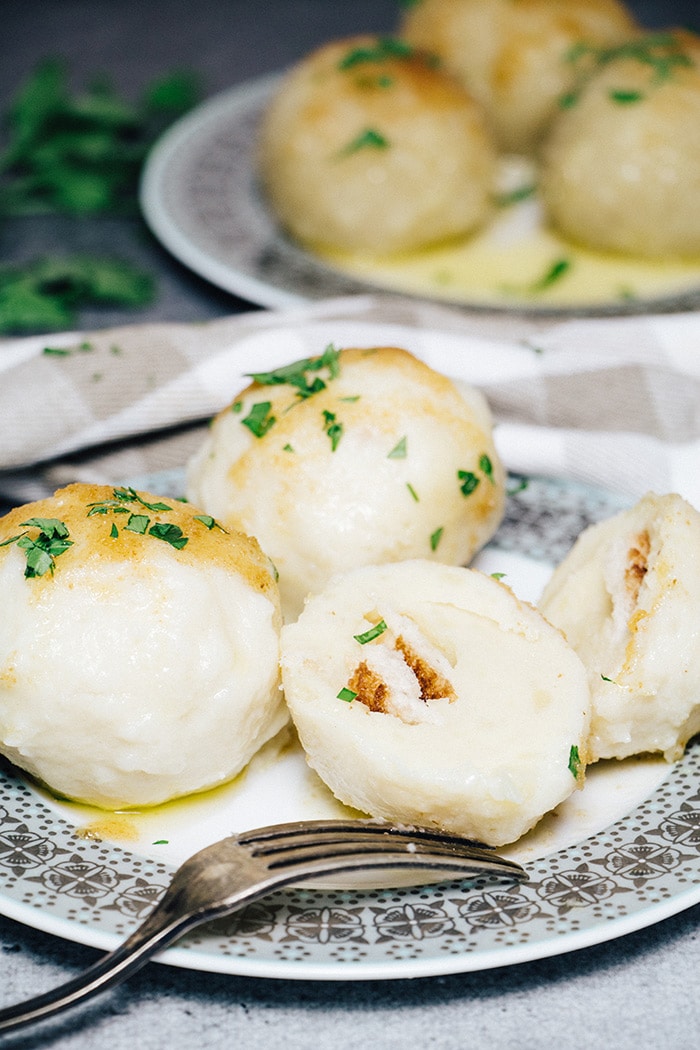 Dumplings are very popular in Germany and they are served at almost every meal. They are known as Klosse in Western and Northern Germany and as Knodel in South Eastern Germany.

I have been to Germany and dumplings are served in most restaurants but some of the best I have tasted are from street vendors. There is also a dumpling museum that if you are in Germany you can visit. It is the Thuringian Dumpling Museum and you will learn the history of the dumpling, how to make the dumpling and have a tasting festival at the end. It is listed as one of the top ten cuisine museums in the world.

German potato dumplings or balls as someone calls them (they really do look like balls) are usually served as a side dish with sausage or a meatloaf type dish. Especially they go really well with Sauerbraten and red cabbage. However, Kartoffelkloesse are also great served with a regular roast and vegetables.

These German dumplings can be made in two different ways so I decided to try them both. Both involve mashed potatoes but the second version also has raw grated potatoes mixed in.

The croutons in the middle of the dumpling provide a great texture and flavor. In the end, the browning of bread crumbs in butter and then pouring over the top like a sauce is just a delicious final touch.

By the way, I found the recipes for both versions in the one and only German cookbook I own: The German Cookbook: A Complete Guide to Mastering Authentic German Cooking by Mimi Sheraton. I can recommend it to anyone interested in the cuisine of this country.

How to Make German Potato Dumplings

Cook and peel your potatoes. 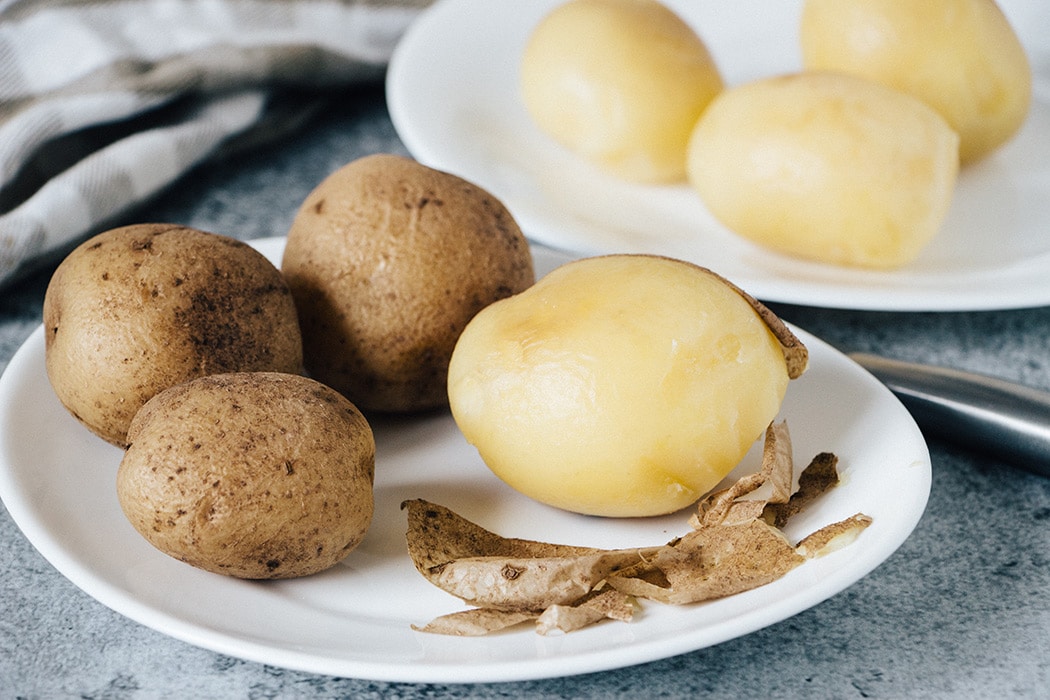 Now mash them with a fork or using a ricer. I prefer a simple fork. IMPORTANT! It is best to make the mashed potatoes ahead of time so they can cool a little and have a better texture for the dumplings. So the day before or at least an hour before is fine. If making the second version of this recipe reserve and grate some raw potatoes. 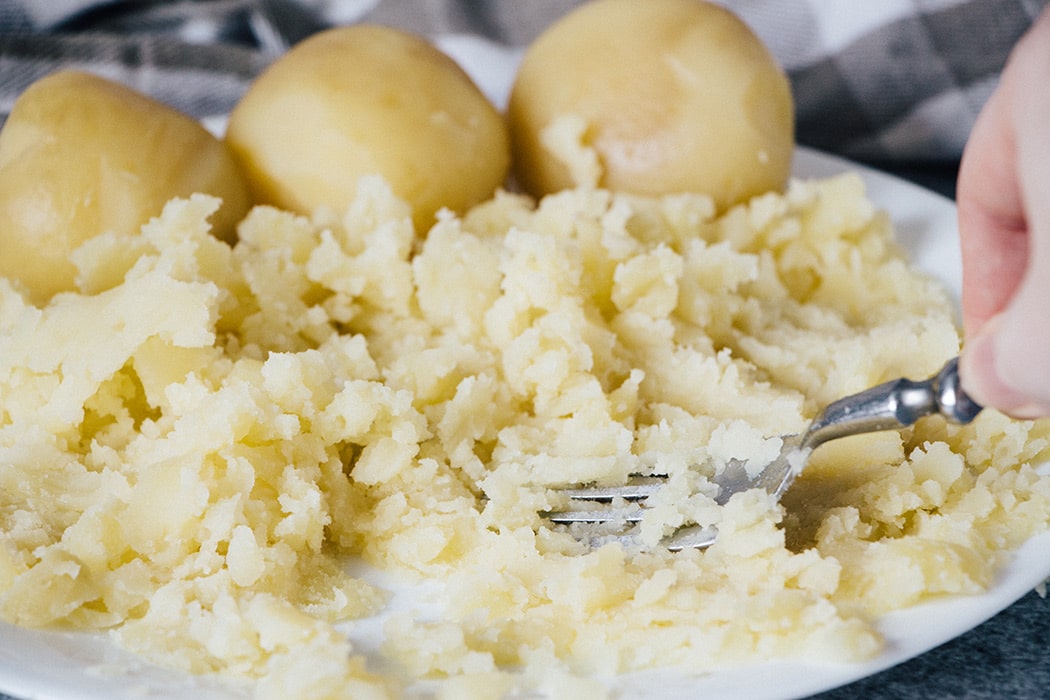 Then add flour, milk, eggs, and salt to the mashed potatoes. 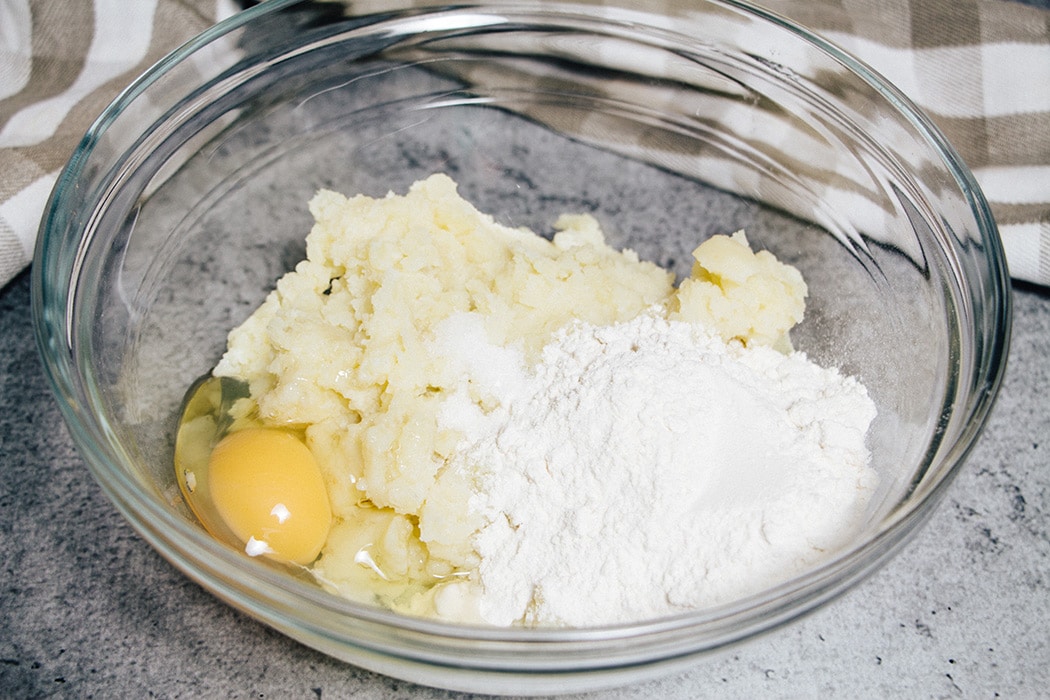 Knead the dough on a floured surface and if it is too sticky to work with add more flour,  a tablespoon at a time. Continue to knead until it becomes smooth. 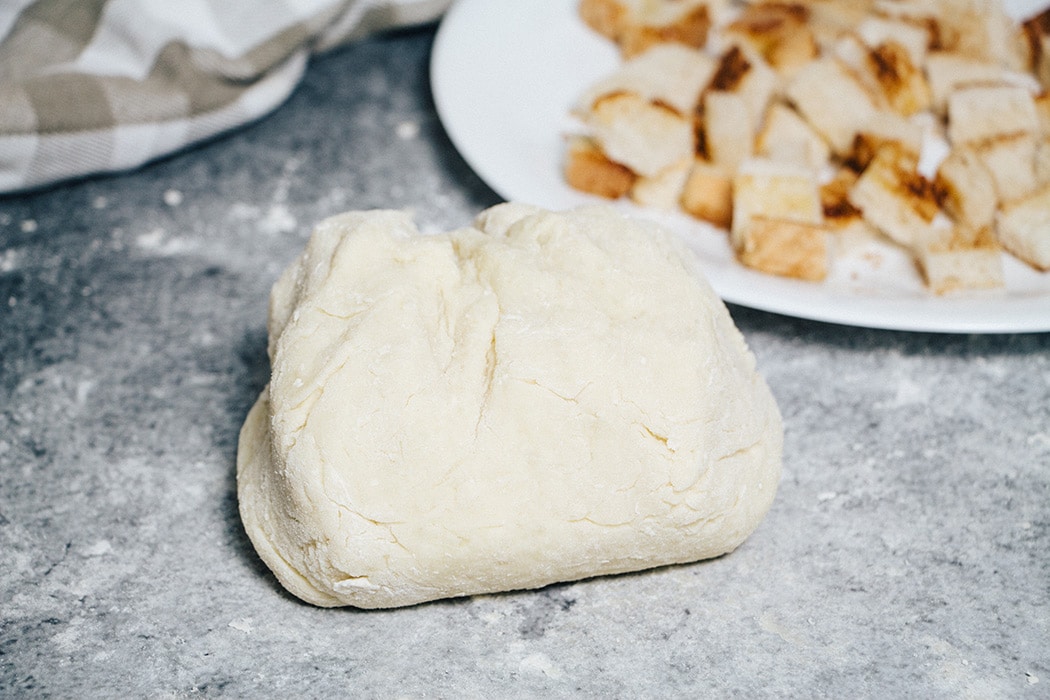 Flour both hands and begin to shape the dough into dumpling balls. As you work on shaping add a few croutons into the middle of the dough. 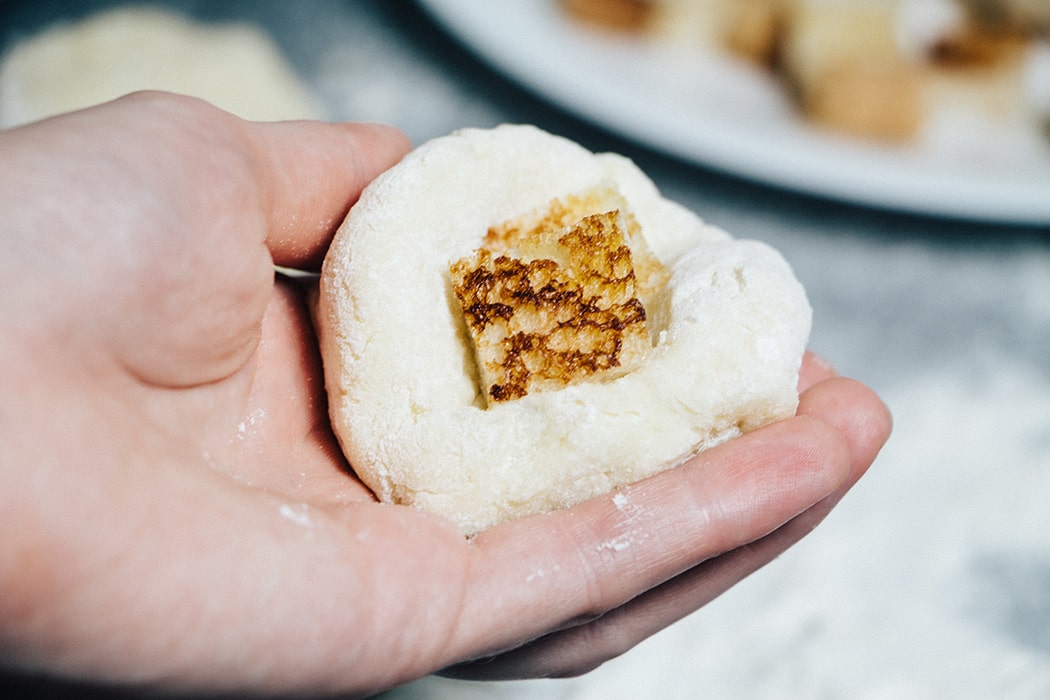 Mold the ball around the croutons. 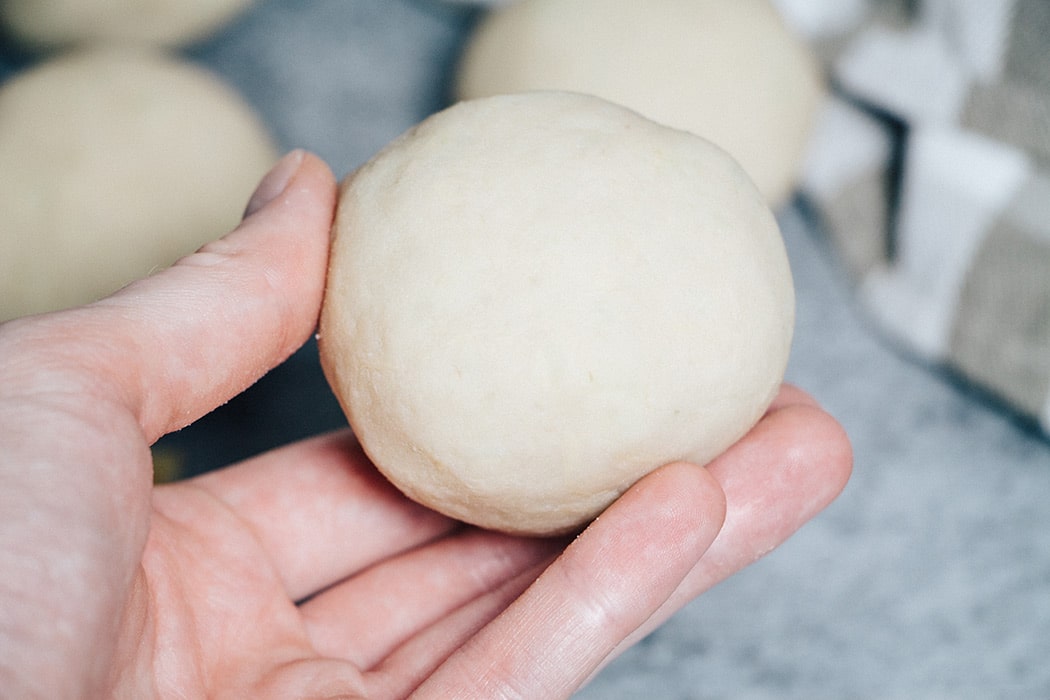 Place the dumpling into a pot of boiling salted water for about 10 minutes. Be careful not to overcrowd the pot. The dumplings should not be touching and will float to the top as they are done. 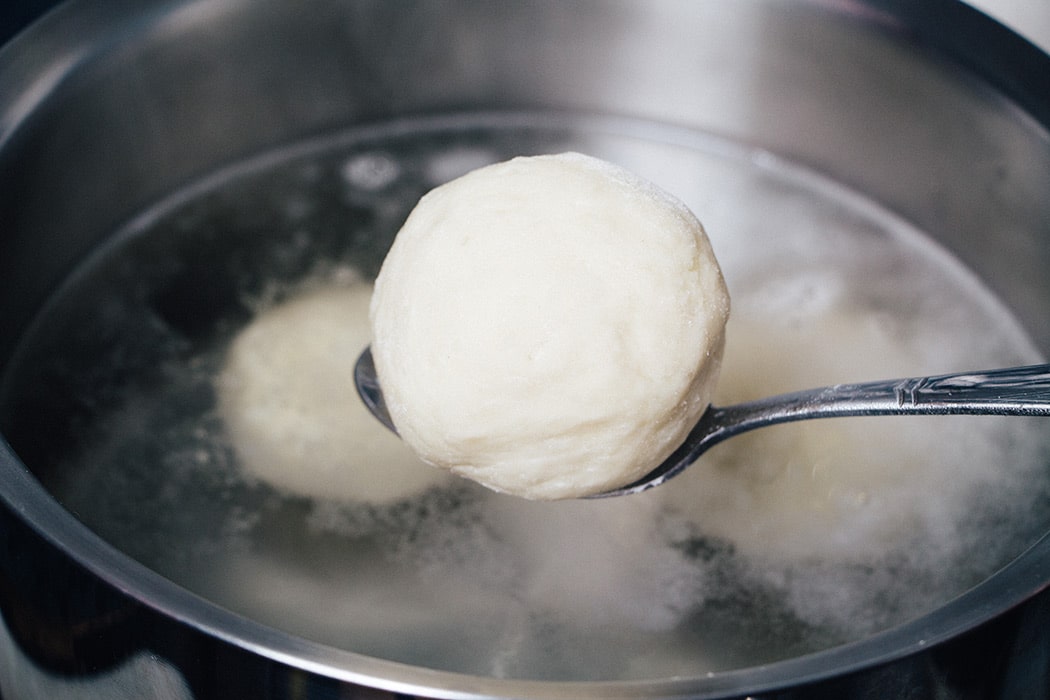 While the dumplings are cooking melt the butter in a saucepan and add the breadcrumbs to make a buttery sauce for the dumplings. Pour it over and voila! Your Kartoffelkloesse are ready.

If making the second version of this recipe with the raw grated potato added, grate the potatoes into cold water. 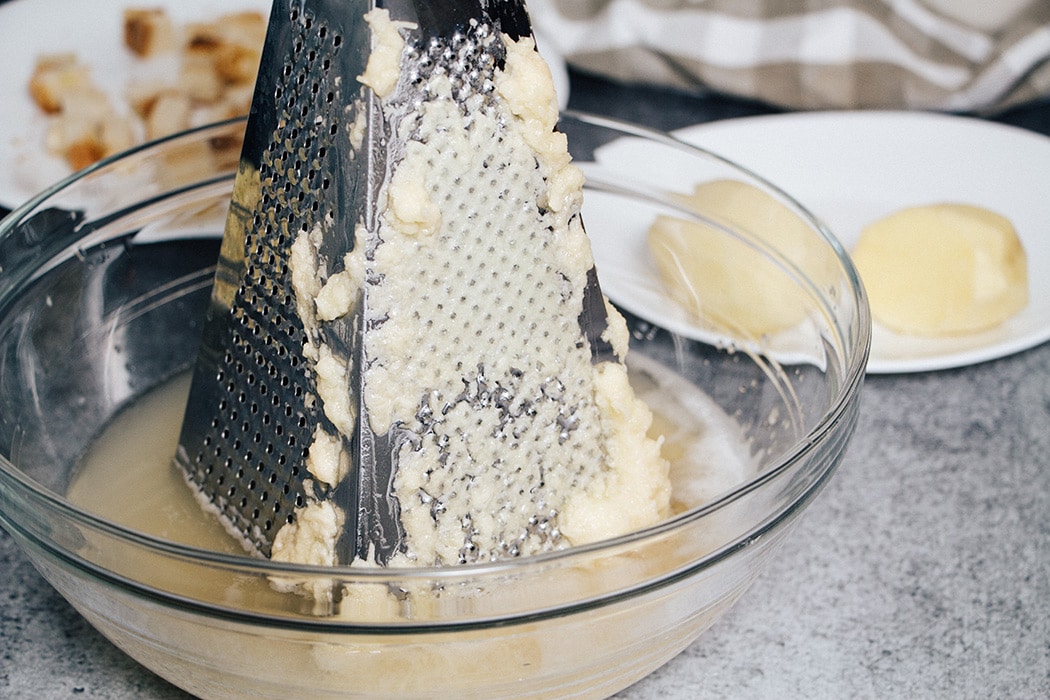 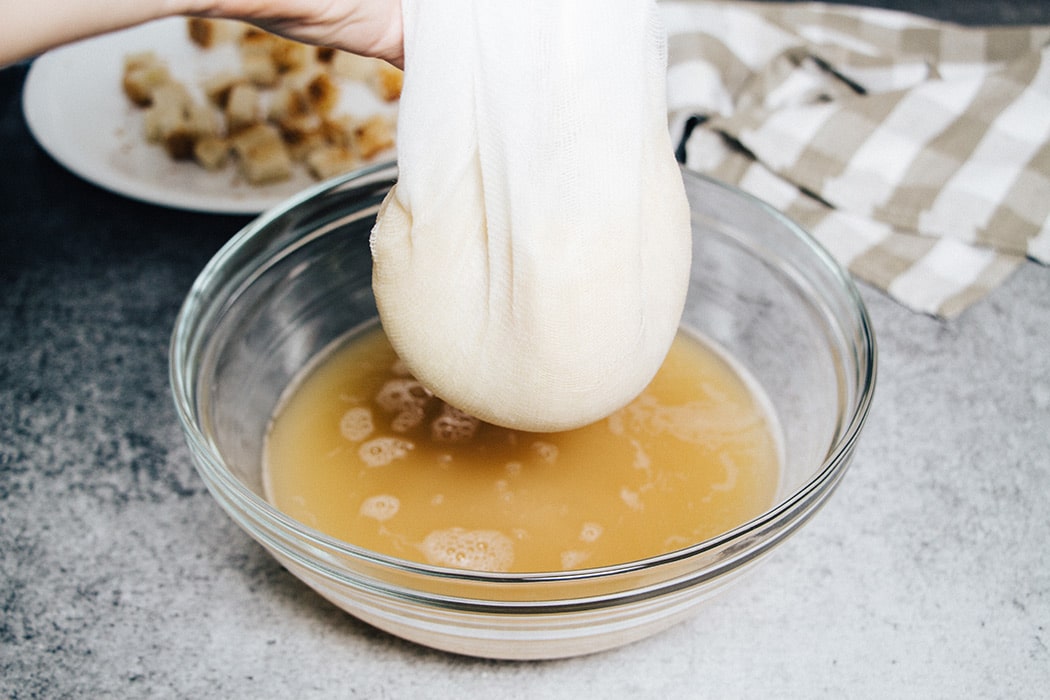 Then mix the grated raw potato in with the mashed potato and continue with the instructions. 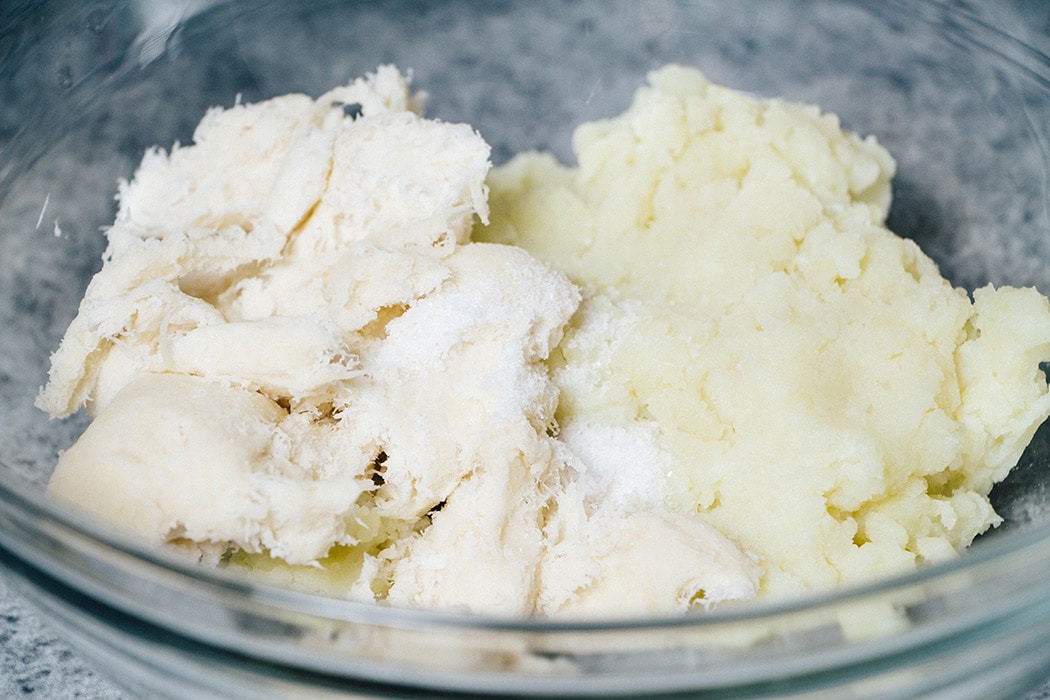 German potato dumplings can be stored in the freezer after cooking. Place the dumplings, so they are not touching, on a cookie sheet until frozen. Then place in a ziplock bag making sure to eliminate all the air. They can be reheated in a frying pan with a little butter and then make a new sauce to pour over when serving. The dumplings should keep for up to 2 months in the freezer.

That’s it, guys. If you will try this recipe, let me know how it turned out in a comments section below. I always love to hear about your success with my recipes! 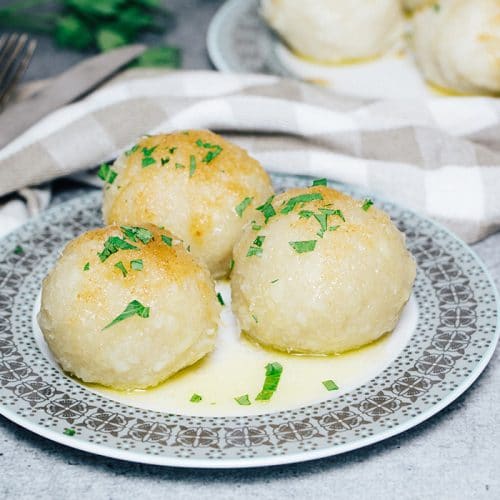 For the version with cooked potatoes:

For the version with raw and cooked potatoes:

The version with cooked potatoes:

The version with raw and cooked potatoes:

Some recipes add a tablespoon or a few of chopped onions to the sauce together with the breadcrumbs. I haven’t tried this yet but I imagine that it’s delicious and go really nice with the dumplings. Adapted from The German Cookbook: A Complete Guide to Mastering Authentic German Cooking by Mimi Sheraton